Ontario's Ministry of Health and Long-Term Care will need to find an additional $2.8-billion in savings over this fiscal year and the next two years if it hopes to meet its own targets for curbing spending growth in the health-care system, according to the province's independent financial watchdog.

In a report released Tuesday, the province's Financial Accountability Office (FAO) poured cold water on the Liberal government's promise to limit health-care spending growth to an average of 1.7 per cent a year in the three years leading up to 2018-19, saying the target can't be met without deeper cuts.

Even if Kathleen Wynne's government continues to squeeze the budgets for hospitals and physician payments as tightly as it has in the past few years, the Ministry of Health and Long-Term Care will still have to slash an extra $400-million this fiscal year – which ends March 31 – $900-million next year and $1.5-billion in 2018-19 to meet its goals, said Peter Harrison, chief financial analyst for the FAO.

"The government set out targets for health-sector expense growth in the 2016 budget. We're saying that unless they make additional changes, they're likely to not meet those targets," he said.

Keeping a lid on the $51.8-billion health budget – which is expected to account for 42 per cent of overall spending this year – is crucial if the Wynne government hopes to balance the budget as promised before heading to the polls in 2018.

The new analysis comes as Ontario and every province outside Atlantic Canada continue to press Ottawa to contribute more money to health care.

Justin Trudeau's government intends to reduce the annual growth rate of its contribution to provincial health-care spending to the equivalent of nominal GDP growth or 3 per cent, whichever is higher, beginning April 1. For the past 12 years, the annual increase has been 6 per cent.

Last month, the Liberals offered more money on top of the Canada Health Transfer for home care and mental-health care, but most provinces rejected the offer. New Brunswick, Nova Scotia and Newfoundland and Labrador later cut side deals for their portion of the top-up funding.

While the new report looks at health-care spending, not funding, the analysis lays bare the budgetary challenge for Ontario.

The report projects that the effects of inflation, additional people, a larger proportion of seniors and other factors will drive health-care expense pressure in the province to grow by 5.3 per cent a year. That does not mean spending will grow at that rate, only that the government will have to find significant efficiencies or cut services to offset that pressure.

"[Tuesday]'s FAO report adds to the conclusions of other third-party experts including the Conference Board of Canada and the Parliamentary Budget Officer that health-care costs are growing above 5 per cent," he said in a statement.

"As we hear about some of these concerning forecasts for the future, what that means is that we shouldn't necessarily pour more money into what we're doing now," Dr. Philpott said in Toronto Tuesday.

For the past five years, Ontario has controlled health spending largely by focusing on hospitals and doctors. The province froze base operating funding for hospitals for four years before increasing it by 1 per cent in the last budget.

The provincial Liberals have imposed unilateral cuts on fees to doctors as part of their long-running battle with the profession.

The government has also constrained spending on long-term care by limiting the number of new nursing home beds. 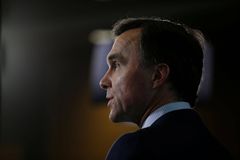 Anticipating fentanyl spread, Ontario to help fund injection sites in Toronto and Ottawa
January 9, 2017
Follow Kelly Grant on Twitter @kellygrant1
Report an error Editorial code of conduct
Due to technical reasons, we have temporarily removed commenting from our articles. We hope to have this fixed soon. Thank you for your patience. If you are looking to give feedback on our new site, please send it along to feedback@globeandmail.com. If you want to write a letter to the editor, please forward to letters@globeandmail.com.
Comments