Ontario must do more to address pollution affecting Indigenous communities, the province's environmental watchdog said in a report released Tuesday that sharply criticized the government for long ignoring the issue.

"After decades of neglect the province is finally taking some steps but the pollution that these communities face is still outrageous," Saxe said. "The Ontario government must make environmental justice part of its pursuit of reconciliation with Indigenous peoples."

The Grassy Narrows and Wabaseemoong First Nations have suffered the effects of mercury poisoning for over 60 years and the government and industry have ignored its consequences, Saxe said. The same can be said of the Aamjiwnaang First Nation which sits beside an area of Sarnia known as Chemical Valley where there is "strong evidence" pollution has contributed to serious health and environmental problems, she said.

"Such conditions would not be tolerated elsewhere in Ontario," she said. "Yet (Indigenous communities) have long been deemed unworthy of priority, effort or expense."

Judy Da Silva, the Grassy Narrows environmental health co-ordinator, said the report validates concerns expressed by many in her community.

"We've been waiting for this for a long time," she said, "for Canadian society to acknowledge that there are massive pollution problems."

Da Silva called the report an important first step but said the government must follow it up with action to treat community members sickened by the pollution.

"People ... have to come out of their little bubble and realize whatever effects First Nations is essentially going to affect their children and grandchildren," she said. "The pollution doesn't stay in the First Nation. It moves on."

Aamjiwnaang Chief Joanne Rogers said she hopes the Ontario government will take the commissioner's report as a sign that it needs to work with Indigenous communities to address the impacts of pollution.

"We have to work together to keep my community, our community of Aamjiwnaang safe and healthy," she said.

Ontario Environment Minister Chris Ballard said the government agrees with Saxe that more must be done to support Indigenous communities.

The Liberal government is spending $85-million to clean up the mercury-contaminated English-Wabigoon River system near the Grassy Narrows and Wabaseemoong First Nations, Ballard said. The area has dealt with mercury poisoning since a paper mill in Dryden dumped 9,000 kilograms of the substance into the Wabigoon and English River systems in the 1960s.

Ontario is also working with First Nations and the federal government to resolve all long-term drinking water advisories in First Nation communities in the next five years, he said.

"This government ... will continue to work on ways to improve people's lives through the water they drink, the air they breath and the land they walk on," Ballard said.

Ontario NDP environment critic Peter Tabuns said the government should follow up on the findings of the report by consistently investigating the source of toxic emissions and laying charges against polluters.

Progressive Conservative legislator Vic Fedeli said the government has known about the problems in Sarnia for over a decade but have failed to act.

Saxe's report also highlighted the plight of the Algonquin wolf in Ontario, saying that the Ministry of Natural Resources and Forestry is failing to protect the species at risk.

There may be as few as 250 mature Algonquin wolves in the wild, the report said, and trapping and hunting remain major threats to the species' survival.

"Algonquin wolves are a unique, threatened, keystone species. They live only in Central Ontario and Southern Quebec," Saxe said. "The Endangered Species Act specifically prohibits killing of threatened species but the Ministry has stripped the Algonquin wolf of much of this protection."

Caroline Schultz, executive director of Ontario Nature, said the government should stop issuing permits for hunting and trapping of the Algonquin wolf.

"We're going to see (the wolves) disappear in a relatively short number of years if the Ministry doesn't get its act together and stop this travesty of issuing these permits," she said.

Minister of Natural Resources Kathryn McGarry said the government will soon announce a plan to provide greater protections to the Algonquin wolf.

Saxe's report also warns that toxic algae is a growing threat to Ontario's lakes and that the province is relying on voluntary programs to limit phosphorus entry into the waterways. It recommends the government ban spreading phosphorus sources like manure, fertilizer and sewage on frozen or saturated ground in order to cut down on runoff which leads to algae blooms. 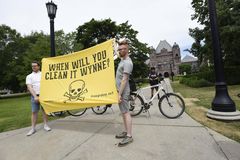