Replacing Ontario's cap-and-trade program with a carbon tax, which the Progressive Conservatives promise to do if they win the election next year, would lead to higher gas prices and more expensive home heating bills, says Premier Kathleen Wynne.

Wynne says the Tory plan – part of the party's election platform unveiled last week – will cost Ontario families $100 a month, compared to the Liberals' cap-and-trade program, which she says costs roughly $13 a month.

"There'd be higher costs for home heating, filling up your car with gas," Wynne said in a phone interview from China, where she's currently on a trade mission. "A carbon tax would add about $1,200 in additional annual costs for families with children. That's what the independent analysis shows us. That I think is a fundamental concern."

Wynne said Ontarians can't afford the increased cost of living, stressing the need to share the benefits of Ontario's strong economy with the province's poorest.

"I'm acutely aware of what the Conservatives are putting out into the political realm and I need to challenge it because it is deceptive and we need to ask the questions about what's behind the commitments that (Leader Patrick Brown) has put forward."

Citing a C.D. Howe Institute study comparing cap and trade to a carbon tax, Wynne said the lower cost to families is why her government first chose the system to reduce greenhouse gas emissions in 2015.

Brown has promised to end the Liberals' cap-and-trade program by July 1, 2019, and withdraw from the Western Climate Initiative. The party says it would instead opt in to federal carbon pricing bench marks and return all proceeds of the program to taxpayers.

Asked about Wynne's criticisms, PC Leader Patrick Brown dismissed the attacks, calling cap and trade "irresponsible and short-sighted." Cancelling the program would allow a Tory government to redirect money to important projects like transit expansion in the Greater Toronto Area, he said.

"What is unaffordable for Ontario families is Kathleen Wynne's cap-and-trade slush fund," he said. "What's unaffordable is the fact that she signed onto a scheme which is a $1.9-billion revenue grab for the Government of Ontario."

Ontario launched its cap-and-trade program this year and has seen three sell-out auctions, bringing in about $1.5-billion for green projects.

The system puts caps on the amount of pollution companies in certain industries can emit, and if they exceed those limits they must buy allowances at auction or from other companies that come in under their limits.

"One of the reasons we chose cap and trade is, of course, it's more effective at reducing greenhouse gas emissions, but it also is cheaper for people," Wynne said.

Wynne also took aim at the PC platform's proposed 22.5 per cent tax cut for the middle class, a measure she describes as "deceptive" and notes that the cut only applies to the tax rate in one bracket, not the overall cut a person would receive.

"Patrick Brown's signature promise is patently false," she said. "The fact is, nobody will see a 22.5 per cent reduction in the income taxes that they pay. That's because he's not factoring in the income tax system which is progressive. It has multiple income brackets."

The Tory platform also says $12-billion in savings could be found over three years – $6-billion from cancelling cap and trade another $6-billion they say could be found from a value-for-money audit. Earlier this week, Wynne called the audit plan "ridiculous" and said it will translate into cuts to education and health care.

Brown said Friday that Wynne's criticisms of his plan to audit the government departments "just shows the culture of waste (Wynne) has allowed to exist at Queen's Park."

"The value-money audit is finding two pennies for savings for ever dollar the province spends," Brown said. "I know Kathleen Wynne says there's no waste at Queen's Park. I know that's difficult to hear say ... there is waste left, right and centre. Read any auditor general's report."

Wynne and the Liberals have repeatedly attacked the Tory plan this week, taking advantage of Brown's decision to release his party's election platform six months ahead of the June vote. 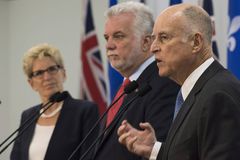 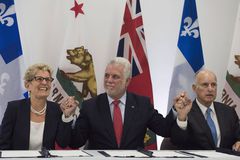