The sprint to Ontario's spring election begins this week as the legislature is set to resume following an unprecedented tumult that saw the official Opposition implode under the weight of its leader's resignation amid sexual misconduct allegations.

When legislators return to Queen's Park on Tuesday, all eyes will be on former Progressive Conservative leader Patrick Brown — if he shows up to take a seat as an independent after being kicked out of caucus.

"We are fighting for the people of Ontario," the 39-year-old politician told a crowd of supporters on the weekend.

"We can't fight amongst ourselves," he said, while dismissing corruption allegations he has faced from the party as "petty internal nonsense.''

The event in Mississauga, Ont., marked the launch of his bid to reclaim his former job in a leadership contest that will see him compete against Toronto lawyer and businesswoman Caroline Mulroney, former Toronto councillor Doug Ford, former Tory legislator Christine Elliott and Social conservative advocate Tanya Granic Allen. The new leader will be announced March 10.

Meanwhile, interim Tory leader Vic Fedeli has been trying to shift the attention away from party infighting and on to its main goal — defeating Premier Kathleen Wynne's Liberal government.

"For 15 years, the Liberals have helped their insider friends get rich, while leaving Ontario families paying more and getting less," he said. "Anything they promise over the coming months is nothing but a costly, last-ditch election ploy they have no intention of keeping."

But political experts said voters will likely not pay much attention to what Fedeli says over the next few weeks.

"No one is going to pay attention to him (Fedeli) or the (caucus)," said Henry Jacek, a political science professor at McMaster University. "It's all going to be on the Tory leader and what he or she says they're going to do."

In the end, Jacek said, the internal fights might mean little to voters when the session end arrives and the election begins.

In the meantime, the Liberal government will try to quietly take damaging issues off the table by, among other things, increasing spending to address concerns about hospital over-crowding, wait times and long-term care spaces, Jacek said.

"They're going to have to say they're going to spend mega dollars to show that they have a plan," he said. "I think that will be showcased in the budget. They don't want to lose health care voters over to the NDP."

On Friday, Wynne slammed the PC leadership candidates, who all oppose the government's plan to increase the minimum wage to $15 in January 2019. The latest increase to $14 an hour angered the small business community, who said the hike was too much to soon.

"You know I heard a lot of people who have never had to worry about whether they are going to be able to put food on the table talking about not increasing a minimum wage so that people who live in this province can look after themselves," Wynne said of the PC leadership candidates and comments they made on the minimum wage during last week's leadership debate.

"That was the most disturbing thing to me I think. That there seemed to be such a lack of understanding."

Wynne said the upcoming provincial budget will be a large part of the government's focus in the new session but gave no hints about when that key pre-election spending package will drop.

"Our plan ... is about providing a fair and thriving province with opportunity for everyone," she said. "So, we will continue to look for ways to support people in this very uncertain time. This is a very uncertain time economically."

Wynne also said the first piece of legislation her government will pass when it returns is a bill aimed at countering so-called "Buy American" policies put in place by some U.S. states.

"The reality is if there are those protectionist initiatives taken in the states then we have to have the ability to respond," she said.

The NDP are expected to outline their legislative priorities Tuesday morning.

Brittany Andrew-Amofah, policy and research manager at the Broadbent Institute, said she expects the spring legislative session will see the Liberals and NDP fighting to distinguish themselves, and the differences in their policies, in the eyes of the public.

"I think the Liberal government is trying to, at the very least, demonstrate that they are a progressive government but that's up to the public to decide," she said.

The New Democrats will try to shift the spotlight onto their policies on health care, and discussions around what a proper living wage should be in the province, Andrew-Amofah said.

"I think there's room and value in talking about poverty reduction measures," she said. "I don't think that has entered into the public discourse as much as it should." 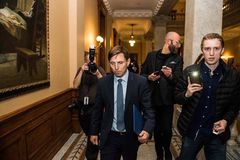