Ontario Progressive Conservatives who want to help choose the party's next leader will have to prove their identity before they can participate in the vote.

The party says it is putting in place a two-step verification system to ensure the transparency of the online ballot, which is scheduled for early March.

It says members will receive a unique verification number in the mail, which will direct them online to verify the information on their record. They will then have to send in a photo or scan of an approved identification document before being allowed to vote.

The announcement comes as the party deals with the discovery of a significant discrepancy in its membership numbers.

An e-mail recently sent to the Tory caucus and obtained by The Canadian Press showed that the party has roughly 67,000 fewer members than the 200,000 claimed by former leader Patrick Brown.

The party is holding a leadership race to replace Brown, who stepped down abruptly in late January amid allegations of sexual misconduct.

Brown denies the allegations, which were made by two women who spoke to CTV News and have not been independently verified by The Canadian Press.

Former Tory legislator Christine Elliott, who came in second to Brown in the last leadership race, is among those competing to take the helm of the party.

Caroline Mulroney, a Toronto lawyer and the daughter of former prime minister Brian Mulroney, is also in the running, as is former Toronto city councillor Doug Ford, brother of late mayor Rob Ford.

The vote is set to take place between March 2 and 8, with the results announced on March 10. The Progressive Conservatives say independent third parties will be responsible for processing votes and maintaining personal information. 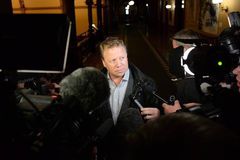