Ontario Premier Kathleen Wynne, in a rare court appearance by a sitting leader, testified on Wednesday she was trying to keep the Liberal family together when she offered a would-be candidate opportunities within her party if he dropped out of a nomination race.

Ms. Wynne faced more than four hours of questions from prosecutors and defence lawyers on Wednesday in Sudbury over her party's handling of a 2015 by-election in the Northern Ontario city. Two organizers for the provincial Liberal Party are on trial over accusations that they offered to bribe a candidate to end his bid for the party nomination.

Patricia Sorbara, Ms. Wynne's former deputy chief of staff, and Gerry Lougheed, a funeral-home director in Sudbury and fundraiser for the Liberals, are charged under Ontario's Election Act. Both have pleaded not guilty.

For subscribers: How an Ontario Liberal operative ended up on trial

As Ms. Wynne's partner looked on, the prosecution spent much of the morning going over the Premier's actions in the months leading up to the 2015 by-election, for which her staff persuaded Glenn Thibeault, then a sitting MP for the federal New Democrats, to become the Liberals' star candidate.

Andrew Olivier, who lost when he ran in the riding in the 2014 general election, has alleged he was offered an appointment or job by the Ontario Liberals if he stepped aside for Mr. Thibeault. While the party won a majority at Queen's Park in 2014, it was the first time in decades the Liberals had not held Sudbury. Ms. Wynne told the court a debriefing after the election placed much of the blame for that loss on a lacklustre campaign by Mr. Olivier.

During cross-examination, Ms. Wynne said Mr. Olivier's announcement that he would seek the nomination in 2015 was "premature," but she told her staff to reach out to him because she wanted to keep him in the Liberal fold.

"He brought experience and a good perspective to the Liberal family; it was my hope that he'd stay involved," she told the court.

Ms. Wynne appointed Mr. Thibeault, who went on to win the by-election and is now Ontario's Energy Minister.

The Premier, who waived her parliamentary privilege so she could testify, told the court there was "disarray" in the local riding and that party brass did not think Mr. Olivier was the best option. "He wasn't a great candidate in the election and we were looking for a candidate to win," Ms. Wynne said.

Mr. Thibeault and Ms. Wynne are not charged with any offences. While the court has heard that Mr. Thibeault had asked for a stipend from the Liberals to run, as well as jobs for two of his federal constituency staffers, he has denied any wrongdoing.

In the conversations, Mr. Lougheed is heard telling Mr. Olivier that the Premier wanted to present him with appointments or jobs if he would consider dropping his bid for the nomination. Ms. Sorbara told him he could express interest in a position within the party, including on an internal commission. Mr. Olivier has told the court that he was never offered money.

Ms. Wynne said that at the time of the calls, when Mr. Olivier said the alleged attempt at bribery occurred, she had already settled on Mr. Thibeault as the party's candidate and was prepared to appoint him.

Mr. Olivier had a conversation with Ms. Wynne before the by-election. He did not record it, citing difficulties because he was in an elevator. During her testimony, Ms. Wynne described the call as "circular" and "awkward."

Eventually, Ms. Wynne said she realized Mr. Olivier might not fully understand the moderate language she was using in the call, so she told him plainly that Mr. Thibeault was going to be the candidate and if he wanted to remain in the party, he could contribute in a number of different ways. However, she said she told Mr. Olivier he would need to go through proper party procedure, because she would not appoint him to any role.

The trial is expected to continue until the end of October. Mr. Thibeault is scheduled to testify next week. 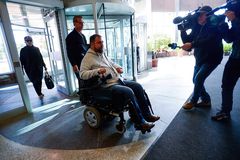