Ontario's legislators are preparing for a weekend of acrimonious debate to pass back-to-work legislation that would end a five-week strike by college faculty and return 500,000 students to classrooms in the next few days.

The province's Liberal government had tried to force immediate adoption of the bill after it was tabled on Friday afternoon but failed to get the unanimous approval required from all parties. The New Democrats refused to provide their support. The bill will now be debated through a rare weekend sitting as both the opposition and government say they expect classes will resume on Tuesday.

The back-to-work legislation comes after Premier Kathleen Wynne faced intense pressure to end the longest college strike in the province's history and salvage the semester. If the bill is adopted on Sunday evening as expected, it will mark the first time in the 50-year history of Ontario's colleges that striking faculty are forced back into the classroom.

With student leaders watching from above, the Liberals and New Democrats traded barbs during the 21 minutes Ontario's legislature sat on Friday. In a preview of the bitter debate expected over the weekend, the Liberals called the NDP "shameful" for delaying the legislation, while the New Democrats blamed the government for the strike.

"This is up to the NDP, we could have passed this last night," Deb Matthews, Ontario's Minister of Advanced Education, said on Friday after the government's request for a fast track failed.

Speaking with reporters, Ms. Matthews said the weekend debate requested by the opposition party was "unconscionable" for its effect on students. "This is cruel what they are doing to students right now. Students have been through so much, there has been so much uncertainty."

NDP Leader Andrea Horwath shot back that it would be irresponsible for her party to allow quick passage of the legislation without reading it first. "I have to say I'm feeling very badly for the students. I'm glad to hear that Tuesday they'll be back in the classroom," she said. "That's really great news."

Ms. Horwath said that in the few minutes she had to leaf through the bill after it was tabled, she noticed changes to the arbitration process that bothered her. The legislation will establish not only how students and faculty return to class, but what form of binding mediation-arbitration would end the dispute.

With an election expected in June, Ms. Horwath said the Premier would need to answer for her government's delay in finding a solution to the strike. "The students have had to go through an awful lot these last five weeks as Kathleen Wynne sat on her hands and did nothing to address this strike," she said. "We raised it in the House many times to try to get the government involved. I don't know why Kathleen Wynne waited so long."

While the NDP has ruled out supporting the government's legislation, the Progressive Conservatives have said they will vote in favour. However, they said blame for the strike rests with Ms. Wynne. "Our Leader Patrick Brown has been very clear that the government should have been at the table five weeks ago bringing all parties together," said MPP Lisa MacLeod. Mr. Brown did not attend the legislature on Friday.

Friday's vote came after a frenzied day on Thursday where the Premier stepped forward and met with the colleges and union, asking both sides to return to the bargaining table only hours after striking faculty rejected an offer made by the colleges. Eighty-six per cent of instructors voted against it, with turnout at 95 per cent.

The talks on Thursday only lasted a few hours before both sides said they were at an impasse. The colleges said their offer included a 7.75-per-cent salary increase over four years, improved benefits and measures to address concerns regarding part-time faculty. The union said it was not prepared to accept the concessions asked of it.

"That is one of the most egregious acts of political theatre I've seen in a long time. The Liberals ought to be ashamed of themselves," said Warren (Smokey) Thomas, the president of the Ontario Public Service Employees Union, after sitting in the gallery during Friday's session at Queen's Park. He warned that the union will challenge the back-to-work legislation in court.

"The Liberals themselves and the Tories are using the students and the strike as a political pawn to hammer the NDP over the head," he said. "I just find it disgusting." 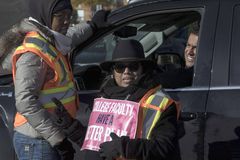 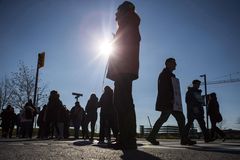 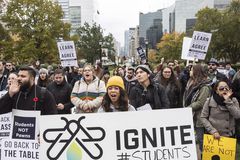