Ontario's public high-school teachers' union wants its members to pay a special levy to bolster its strike fund, The Globe and Mail has learned – signalling the union is preparing for a labour battle when its contract comes up next year.

The Ontario Secondary School Teachers' Federation will ask local leaders this weekend to approve a 0.3-per-cent levy to increase its member-protection account, a rainy-day fund that covers strike pay in the event of job action. It would raise about $10-million a year and would kick in any time the balance of the member-protection account falls below $140-million. It is unclear what the current balance is, but internal OSSTF financials from 2014 projected the account would contain $55-million in 2016.

The move calls into question the need for a secret $1-million payment the Liberal government gave OSSTF to cover its bargaining expenses, as revealed by The Globe in the fall, given that the union collects dues from its members and can institute levies to bolster its strike fund.

OSSTF president Paul Elliott declined to comment when asked Tuesday about the levy. "I won't be making any public comments on an internal issue," he said in an e-mail.

Union representatives will vote on the levy at OSSTF's annual general meeting in Toronto this weekend. The motion will most likely pass because OSSTF wants to send a strong message to the government that it is prepared to take job action in the event that negotiations falter.

Strengthening the strike fund comes after a tough round of negotiations during which the public high-school teachers' union held strikes at school boards in the Toronto area and Northern Ontario, and the government legislated the teachers back to work.

A three-year agreement was reached in August.

In the months after, The Globe revealed that the government paid $1-million directly to OSSTF to cover bargaining costs. The payout was one of several payments, totalling $3.47-million, the government agreed to give to four teacher and support-staff unions in three rounds of bargaining since 2008 to subsidize negotiating costs.

The money was paid despite OSSTF internal financial statements, obtained by The Globe, showing that the union had substantial reserves of its own for bargaining costs, political action and grievances. The member-protection account's total balance at the end of the 2014 fiscal year – when the union began negotiating a new collective agreement with the province – was more than $65-million.

Education Minister Liz Sandals shrugged off the implications of the union pumping up its strike fund ahead of the next round of bargaining. The current contract expires at the end of August, 2017.

"It doesn't particularly concern me," she said Tuesday afternoon as she headed into a caucus meeting at Queen's Park. "They have their own rules. They'll set fees, they'll collect the fees, they'll spend the fees the way they want to spend the fees. That's really their business, not my problem."

The Liberals need to keep a strong relationship with OSSTF, in part because teachers are key members of the party's political base and also because labour disputes involving schools draw attention.

Asked if she was annoyed that OSSTF received $1-million from taxpayers when it apparently has no trouble raising tens of millions of dollars from its members, Ms. Sandals said: "No, no."

The government's payments to the teachers' unions have proven controversial. After initially saying the government did not ask to see the unions' receipts to verify their bargaining expenses, the Liberals said they would seek an accounting.

Ms. Sandals said Tuesday that OSSTF has to produce an audited statement of bargaining expenses for the $1-million, but she did not answer directly when asked if the union has produced such a statement.

She continued to justify the $1-million as necessary to cover the costs of the new, more complicated bargaining system the province put in place, which divided issues into local and provincial tables. 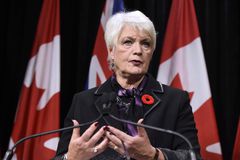 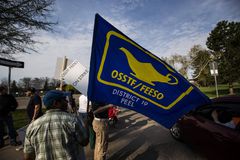