Standard & Poor's is downgrading Ontario's long-term credit rating, saying the province may be tackling its deficit but a multibillion-dollar 10-year plan for infrastructure spending will exacerbate its debt load

The downgrade, from double-A-negative to A-plus, comes because of a combination of "very high debt burden" and "very weak budgetary performance," the major credit-rating agency says.

Since being re-elected last year, Ontario has been moving to cut the province's deficit – projected to fall to $8.5-billion this year – by squeezing health care and education spending. But S&P is focusing, among other things, on the government's intention to spend $130-billion over the next 10 years on transit and other infrastructure.

In addition to raising a red flag on the province's long-term infrastructure plans, the rating agency chastised Queen's Park for not being stricter on reining in its spending.

"Ontario has been slow to fully roll out the spending controls and revenues needed to eliminate its structural operating deficit, which has caused its tax-supported debt level to approximately double since fiscal 2008," according to the analysis accompanying S&P's decision.

Douglas Porter, chief economist at Bank of Montreal, characterized the downgrade as "a fairly significant move by Standard and Poor's." Mr. Porter called it "more of a report card on what has been than a look forward."

"To some extent it reflects the fact that Ontario has had a relatively large buildup of debt since the recession hit," he said. "In fact, by some measures, we have had the fastest buildup of debt among the provinces and that's even as a share of the economy, that's not just in dollar terms."

This is the first Ontario downgrade by S&P since October, 2009, and it has been 27 years since the agency has given the province its highest rating, which is triple-A.

Ontario Finance Minister Charles Sousa was quick to issue a statement, putting a positive spin on the downgrade. He noted that S&P characterized the province's economy as "very strong" and it said that "despite recent slow growth remains well-diversified and wealthy."

In his spring budget, Mr. Sousa projected the deficit to fall further, to $4.8-billion next year, and then to be eliminated in 2017-18.

As a result of the downgrade, says Mr. Fedeli, the province's borrowing costs will rise. The consequence is that interest costs to finance the debt, which are already at $11.4-billion a year, will "now eat into the budget." Ontario's debt is $284-billion.

"It takes money away from services we enjoy," he said, including education and health care as services that could be affected by higher borrowing costs.

PC Leader Patrick Brown issued a statement, adding to the list of services that could be affected by higher borrowing costs. He said it "means less money for long-term-care beds, improving transportation corridors or making crucial investments to lower hydro rates."

This latest downgrade follows last December's decision by another agency, New York's Fitch Ratings, to lower Ontario's rating to double-A-negative from double-A. At that time, Fitch warned the province may have difficulties balancing its budget by 2018.

But, in its analysis, S&P says that it expects Ontario to "remain on track" to eliminate its deficit by then.

Mr. Porter says Ontario has had some improvement in cutting the deficit, although he described that process as "achingly slow."

"The main message to Ontario is that they have to keep their nose to the grindstone in terms of controlling costs and bringing that deficit down," he said.

In the past year, Mr. Porter says, there has been a significant shift in the fiscal balance. For the first time, he says, the provinces' combined debt is more than that of the federal government.

"Really, when we look at the fiscal issues of this country, we really have to look at the provinces first," he said.

Wynne relying on low-interest rates and cost savings to eliminate the deficit
April 23, 2015 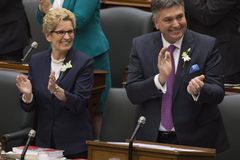 Ontario Liberals look to make big cuts to climb out of deficit
April 22, 2015 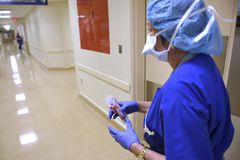