Ontario's top court has thrown out sexual-assault convictions against a man accused of abusing his five-year-old cousin, in the latest case in which trial judges have been criticized for applying unfair legal standards to accused male perpetrators.

In this case, as in previous ones, the Ontario Court of Appeal points to an overemphasis on believing the victim, which has the effect of making the accused demonstrate his innocence, and runs counter to a central principle of the criminal-justice system – that the prosecution bears the burden of proving guilt. It also challenges a view among sexual-assault crisis centres and others that victims are too often not believed.

The new ruling, released on Thursday by the appeal court, was somewhat different from two other cases in the past nine months, in that it involved 33-year-old events and a small child. In such circumstances, the appeal court said, the issue of the reliability of the complainant's evidence is heightened.

But as an adult, the complainant testified with superb recall about two incidents of forced sexual intercourse just before she turned 6, according to the trial judge, who found her entirely credible. The problem, according to the appeal court, was that the judge, the now-retired Jack Nadelle of the Ontario Court, also found the accused credible. The man testified that, as a teenager, he babysat his cousin, but that nothing untoward happened. With two seemingly believable but opposing viewpoints, the judge said it was important to have evidence to confirm the prosecution case. Yet in his explanation for convicting the former babysitter, he offered no such corroborating evidence. Indeed, none had been admitted as evidence at the trial in 2015.

"By the standard he set, his acceptance of the complainant's evidence was not 'considered and reasoned,'" the appeal court said in a 3-0 decision written by its Associate Chief Justice Alexandra Hoy. The court ordered a new trial for the accused man. (His name cannot be published, to protect the complainant's identity.)

Women's advocates say that when appellate courts toss out convictions in sexual-assault cases, it deters victims from coming forward to police.

"It has a chilling impact on the community," Deepa Mattoo, director of legal services at the Barbra Schlifer Commemorative Clinic in Toronto, said in an interview.

The appeal-court ruling, while about historical events, contained strong echoes of cases from the Ontario Superior Court and the Alberta Court of Appeal in the past nine months.

In the Alberta case, which also involved children as alleged victims, and events a few years old, the appeal court threw out a conviction and ordered a new trial. It said the trial judge appeared to put the burden on the accused man to prove his innocence beyond a reasonable doubt, rather than on the prosecution to prove guilt.

"The accused must be treated fairly when the court is determining whether his evidence raises a reasonable doubt," the court said in a 2-1 ruling, which was at odds with a pattern in which Alberta's superior courts had thrown out several acquittals in the previous three years when judges relied on myths and stereotypes about sexual-assault victims.

Last month, Ontario Superior Court Justice Michael Dambrot threw out a sexual-assault conviction against university student Mustafa Uruyar in a highly publicized case involving complainant Mandi Gray, a PhD student. (Ms. Gray asked a court that a publication ban on her identity be lifted.) Justice Dambrot ruled that although the trial judge, the now-retired Marvin Zuker, had written a 179-page judgment, he had failed to explain why he had rejected the testimony of the accused and accepted that of the complainant.

"I agree with the trial judge that we must be vigilant to reject pernicious stereotypical thinking about the behaviour of women," Justice Dambrot wrote in his ruling. "At the same time, we must not adopt pernicious assumptions about men and their tendency to rape."

And on Wednesday, a trial judge acquitted three police officers of sexual assault, declaring that "the slogan 'believe the victim' … has no place in a criminal trial."

Michael Lacy of Toronto, a vice-president of the Criminal Lawyers' Association, who was not involved in the case, called the series of rulings "a necessary and helpful judicial dialogue."

"I view the recent cases as an important reminder to trial judges and the public alike about the burden of proof in all cases and the presumption that applies to every accused regardless of the charge."

Constance Backhouse, who holds the University of Ottawa's chair in sexual-assault law, said judges today face greater public scrutiny. "These are tough times for them. I can't say I feel heartened by the particular phase we seem to be in. Who would advise a victim of sexual assault to come forward to the criminal-justice system right now?

"Maybe we just throw up our hands and say, 'it's hopeless.' Although I think that would be a mistake, after decades of efforts to improve criminal justice."

‘Believe the victim’ has no place in courts, judge says in sexual assault ruling
August 9, 2017 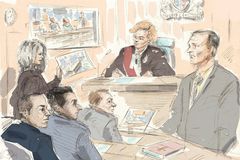 Nova Scotia intimate photos case unlikely to deter teens: experts
July 30, 2017
Veterans merge sexual-assault suits against Canadian military
July 19, 2017
Follow Sean Fine on Twitter @seanfineglobe
Report an error Editorial code of conduct
Due to technical reasons, we have temporarily removed commenting from our articles. We hope to have this fixed soon. Thank you for your patience. If you are looking to give feedback on our new site, please send it along to feedback@globeandmail.com. If you want to write a letter to the editor, please forward to letters@globeandmail.com.
Comments are closed