The Ontario Provincial Police union has fired a senior executive amid a criminal fraud probe and cancelled his appointment to the board of a major provincial pension fund.

The police force has also suspended Karl Walsh and two other officers from duty over the allegations, which sparked an RCMP raid of the union's offices last week. Court documents made public on Friday outline RCMP allegations of a scheme to defraud the union's members through a travel company and offshore investments.

The RCMP alleges Mr. Walsh, union president Jim Christie and vice-president Martin Bain committed theft, breach of trust, fraud and laundering the proceeds of crime. The allegations have not been proven and no charges have been laid.

Doug Lewis, acting president of the Ontario Provincial Police Association, said through a spokesman on Sunday that the union's board of directors unanimously agreed to terminate Mr. Walsh's employment contract at a meeting on Friday. Mr. Walsh has been on leave for a week already.

The association has also ended Mr. Walsh's role on the Ontario Pension Board, which administers the pension plan for 72,000 public service workers. He had served since 2012.

The union has put forward a replacement nominee to the provincial government, Stephanie Woodward, the board's director of stakeholder relations, said in a statement.

Ms. Woodward said Mr. Walsh had no signing authority and did not determine pension entitlements. She said the board has never used the travel agency or consulting firm the RCMP are investigating.

Mr. Walsh, Mr. Bain and Mr. Christie were suspended from duty on Friday by the OPP, said its spokesman, Sergeant Peter Leon. Mr. Walsh and Mr. Bain hold the rank of provincial constable, while Mr. Christie is a detective sergeant.

Union executives are seconded by the police force during their terms, and the three will still receive the OPP salary they may have been paid while working for the union. Suspension without pay is only an option when an officer has been convicted of an offence, said Sgt. Leon.

Mr. Walsh, who ran unsuccessfully in the 2011 provincial elections in Barrie for the provincial Liberals, said in his candidate profile that he spent 17 years with the OPP.

In the documents, RCMP Sergeant Gordon Aristotle alleges the three union officials own half the shares of First Response Travel Group, a company created last year, and that union employees were encouraged to use the company. The three men have not disclosed their ownership in First Response to the union, the documents allege.

The RCMP documents also allege a consulting company was charging the union monthly fees and the three men used the consulting fees to buy shares in the travel company. The shares were held in trust through an offshore investment scheme, the documents allege.

With reports from Karen Howlett and The Canadian Press 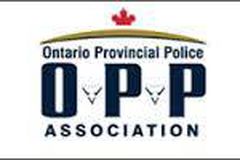