Samuel de Champlain founded a nation in New France and hockey hero Maurice Richard sparked a nationalist rebirth. Quebec is now transfixed by a popularity contest between the two good names, courtesy of the Harper government.

The span to replace the crumbling Champlain Bridge has caused no end of discord in Quebec, from the collection of tolls to whether commuter train tracks should be included. The name of the replacement pits the Conservatives' apparent preference for a hockey folk hero against a father of French Canada who is backed by Quebec's pundits and scholars, letter writers and open-line callers.

"I haven't seen a single argument to convince me the name should change. This is what annoys me. Nobody has made the case for replacing Champlain's name," said Benoît Melançon, a French literature professor and author of The Rocket: A Cultural History of Maurice Richard.

The federal decision to adopt Maurice Richard as the name of the new bridge is a fait accompli, according to reports citing anonymous sources published in La Presse. Infrastructure Minister Denis Lebel, the cabinet member heading the project, has never hidden his admiration for Mr. Richard and hinted he prefers a name change.

Maurice Richard Jr., the hockey player's son, said he received a call from Mr. Lebel indicating the minister would soon have news about the bridge's name. Mr. Richard felt the need to appeal for calm on Tuesday on local radio stations, saying his father would be unhappy about the fuss. "If my father were alive today, I'm pretty sure he'd be against renaming the bridge," he said. "But personally, I think if they want to rename the bridge, why not Richard?"

By Tuesday, the furor seemed to cause Mr. Lebel to reconsider. "No decision has been made, and I find it sad two great historical figures are being pitted against each other," Mr. Lebel told the House of Commons on Tuesday.

"We are witnessing a strong manifestation of respect for the memory of Samuel de Champlain," the French President said in Quebec City on Tuesday. "Perhaps a way can be found to equally honour the memory of Maurice Richard."

The Champlain Bridge, like the other main link to downtown Montreal, the Jacques Cartier Bridge, belongs to the federal government because the federally owned port built some early Montreal bridges. They've been a jurisdictional hot potato since. The bridge spans the St. Lawrence River, a waterway Cartier first mapped on three voyages from 1534 to 1542. Sixty years later, Champlain helped establish the first European settlements in Canada, founded Quebec City, mapped vast swaths of territory and made alliances with the Algonquin and Huron tribes while warring with the Iroquois.

He ventured as far west as Lake Huron before becoming governor of New France in 1633.

Mr. Richard, who always insisted he was a simple hockey player, was the most prolific scorer of his time and led the Montreal Canadiens to eight Stanley Cups. He played for 18 years, ending in 1960.

What turned the hot-tempered hockey player from a sports hero into Quebec icon was a 1955 incident in which he struck a linesman and was suspended for the rest of the season by then-NHL president Clarence Campbell. French-Canadian fans rioted.

French-speaking Quebeckers, long under the thumb of their "English" bosses and regarded as passive, saw Mr. Richard's fiery excellence as emblematic of what they could become and his punishment at the hands of the NHL boss a symbol of their subjugation.

Many historians describe the riot as a catalyst for the Quiet Revolution, which brought major reforms in education, reduced the influence of the Roman Catholic Church in the affairs of the state and inspired a vigorous nationalist movement.

Still, most of Quebec's cognoscenti dismiss Mr. Richard's importance next to that of Champlain. "Would it even occur to the Americans to deconsecrate the George Washington Bridge to honour Babe Ruth?" Le Devoir columnist Michel David wrote on Twitter.

Prof. Mélançon said Mr. Richard has a vital place in Quebec history books, but the incident points to tendencies he finds troubling in Mr. Harper's approach to history.

He pointed to an article in the Canadian Journal of History in the spring in which Manitoba academic Yves Frenette said Mr. Harper is "conscripting Canada's past" by emphasizing military exploits linked to the British.

"There is a clear pattern from the Harper government to start Canadian history in the 19th century," Prof. Mélancon said. "They are putting forward a very British version of Canada's past. This is part of that reshaping of Canadian identity. Remember, Mr. Richard is almost as big a hero in Canada as he is in Quebec."

Even people who might be expected to support the case for a Richard bridge are at least ambivalent. Modern-day nationalists have rallied to Champlain. "If there's a national hero, it's Champlain," said Jean-François Lisée, a Parti Québécois leadership candidate. Montreal Mayor Denis Coderre, a federalist and diehard Canadiens fan, said he considers Mr. Richard a hero, but wishes the federal government had not created the controversy.

The debate has one upside, according to François Legault, the leader of the provincial opposition party, Coalition Avenir Québec. He is one of several politicians, including Premier Philippe Couillard, who supported a Richard bridge but then backtracked. "The beauty of this is that we've never talked so much about Samuel de Champlain," Mr. Legault said.

(Editor's note: An earlier version of this story incorrectly said then-NHL president Clarence Campbell was based in Toronto when he suspended Maurice Richard in 1955. He was based in Montreal.)

Understanding the controversy over Montreal’s Champlain Bridge
May 18, 2014 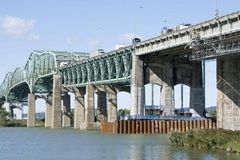 Ottawa's plans for a toll on Champlain Bridge draw criticism in Quebec
May 18, 2014