A native organization that was responsible for assisting evacuees from flooded Manitoba reserves is under investigation after hotels that have been providing food and shelter for more than two years complained the group is failing to pay millions of dollars in bills.

The Manitoba Association of Aboriginal Fire Fighters (MANFF) was tasked by the federal government to help more than 2,000 First Nations people forced from their communities when floods rose to record levels in the spring of 2011. It was responsible for deciding who was eligible for assistance, finding them accommodations, and covering the costs.

But Bernard Valcourt, the federal Aboriginal Affairs Minister, announced this week that, because MANFF's "capacity to deliver long-term recovery services and support for evacuees is limited," the job of helping the displaced would be turned over to another organization.

Mr. Valcourt said the Red Cross will conduct an assessment of the needs of the evacuees, many of whom are still in hotels, and will work with the affected communities.

In fact, the MANFF board of directors voted a week earlier to stop helping the evacuees.

MANFF did not return calls on Tuesday. But the decision came after the federal government initiated two investigations of the organization.

An independent investigator has been asked to review allegations and complaints regarding payments to evacuees. And a team of investigators is reviewing the disputed financial arrangements between MANFF and its suppliers.

"We will not tolerate the abuse of tax dollars," said Andrea Richer, a spokeswoman for Mr. Valcourt.

More than 1,200 people were removed from the Lake St. Martin First Nation, 300 kilometres north of Winnipeg. They make up the largest number of those who are still unable to return home.

Mr. Valcourt announced in May that the federal government, the province and Chief Adrian Sinclair had reached an agreement on a site that could become a new permanent location for the native community. But the chief and his council rejected the land more than a year ago as unsuitable. And members of the First Nation have yet to agree to the deal.

Until that is settled, they will stay in temporary shelter and rely on federal emergency assistance, filtered through the province and MANFF.

As early as July, 2011, the chief and council had asked that MANFF be "disengaged" from any emergency services involving the community.

Last year, the governments started asking why the number of evacuees from Lake St. Martin had climbed over the 10 months since the start of the flood. Chief Sinclair and his council explained that they had no part in keeping the evacuee list – those decisions were made solely by MANFF.

In April, the CBC obtained documents showing that MANFF had asked a Winnipeg restaurant to produce and deliver more than $1-million worth of evening snacks for evacuees over an eight-month period. The cost of the snacks had increased from $10 to $60 per person between 2011 and 2012. Ottawa is refusing to pay that bill.

And hotels that housed the evacuees started complaining last summer that they were not getting paid. The company that owns the Misty Lake Lodge near Gimli and the Ashern Motor Hotel says it is owed $3-million – that is, after Ottawa stepped in with a recent payment of more than a half million dollars.

And other hotels are in the same situation. The Thriftlodge in Winnipeg said on Tuesday that it is among them.

Retha Dykes, the general manager of the Misty Lake Lodge, said many of the unpaid bills at her hotel were accrued by MANFF's own staff.

"They usually have anywhere from three and five employees of their own in the hotel, who stay here and eat here and are supposed to be here to assist the evacuees," Ms. Dykes said. "So it's kind of a slap in the face. Not only do they not pay their bills, but they send their staff here to rack the bill up even higher."

Ms. Dykes said the hotel started its own inquiries to find out why it was not being paid, and that information is being shared with the investigators.

The hotel, which housed 65 evacuees in April, could force the six who remain to leave.

"But they are kind of the victims in this whole situation," Ms. Dykes said. "To kick the people out when they don't have anywhere to go just doesn't seem right at this point, because it's not their fault."

Spring, 2011 – Manitoba experiences a once-in-350-years flood. Decision is made by the province to divert water from the Assiniboine River to spare Winnipeg but causing serious flooding in Lake Manitoba and Lake St. Martin.

May, 2011 – Lake St. Martin reserve is evacuated along with people from other reserves. Evacuees are taken to hotels, mostly in Winnipeg. The Manitoba Association of Native Firefighters (MANFF) is contracted by the federal department of Aboriginal Affairs to conduct emergency operations.

August, 2011 – Province purchases farmland adjacent to the existing Lake St. Martin reserve without the knowledge of the First Nation, at a cost of $1.5-million, as a place for the community's relocation. The First Nation deems it to be unsatisfactory and prone to flooding.

November, 2011 – Chief Adrian Sinclair rejects a radar base at Gypsumville, where Manitoba had spent $14-million to establish as an interim site for the community. It is a breeding ground for snakes and the people are worried they will be stuck at the "interim" site forever.

March, 2012 – Federal officials are concerned that the number of evacuees has grown over time. The chief explains that he and his council have no part in keeping the list and decisions were made solely by MANFF. Many people are eventually disqualified.

November, 2012 – Province and federal government reduce the amount of money evacuees receive for food and expenses to $4 per day.

April, 2013 – CBC reports that MANFF spent $1-million on evening snacks for evacuees over eight months and is spending $111 per evacuee per day on meals and snacks.

April, 2013 – Hotel owners report that MANFF has not paid millions of dollars in bills for housing the evacuees.

May, 2013 – The federal government announces that Chief Sinclair has agreed to move the community to the land purchased by the province in 2011. The people of the First Nation have yet to agree.

May, 2013 – MANFF votes to stop helping refugees. The federal government is investigating the organization.

June, 2013 – Federal Aboriginal Affairs Minister Bernard Valcourt announces that MANFF will no longer handle emergency operations. The Red Cross will be asked to work with the affected communities.

Flood-plagued First Nations should be moved to higher ground, Ontario MPP says
May 7, 2013 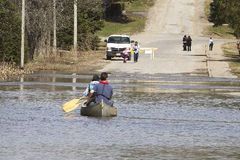 Manitoba residents who refuse to leave during disasters could be arrested, fined with new bill
May 2, 2013 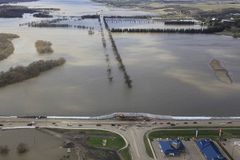 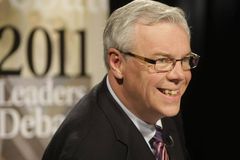