In 1934, Bill Wilson guzzled four beers on his way to a hospital where he saw a Godly light and swore off alcohol for life – a spiritual awakening that would form the foundation of his 12-step Alcoholics Anonymous program.

Until this week, the Toronto-area umbrella organization that co-ordinates Alcoholics Anonymous in the region sought to uphold Mr. Wilson's holy vision by ostracizing groups that offered a secular interpretation of the 12 steps.

But, after battling a human-rights complaint for nearly three years, the organization decided this week to back down on its God-or-gone stance, ending a period of acrimony that forced the Ontario Human Rights Tribunal to consider whether Alcoholics Anonymous constitutes a religious group.

Read more: What it's like ... to admit you're an alcoholic

"I'm glad it's over," said Larry Knight, a 59-year-old woodworker who launched the complaint against Greater Toronto Area Intergroup of Alcoholics Anonymous in 2014. "I took a lot of time off work to do this. The important thing at the end of the day is we're back."

Mr. Knight's first exposure to AA came in 1993 when he entered a treatment centre based on the 12 steps and emerged a sober man.

After 15 solid years in the program, he and some agnostic friends noticed meetings around the Toronto area taking on a more religious tone. Although he'd always had some trouble with the prevalence of God in the program (Step 3: Make a decision to turn over our will and our lives to the care of God as we understood Him), he would rationalize his way through the teachings by replacing all mentions of the divine with "the AA community."

But this was different. "A lot of Jewish friends, native friends, became uncomfortable," Mr. Knight said. "I had native sponsees and they were not very comfortable talking about things in Christian terms … and things were only becoming more Christian. So we created these meetings."

He and some friends began organizing agnostic AA gatherings in and around the GTA. At first, the region's organizing body, Intergroup, embraced its new secular off-shoots, listing the meetings in its directories online and in print.

The acceptance dissolved on May 31, 2011, when Intergroup abruptly expunged the secular groups from its directories.

"We upset somebody who stumbled into our meeting," Mr. Knight said. "She wasn't happy about not having enough God stuff and she raised a little muck. … They put a motion on the floor to delist us and we were delisted. What happens then is your group becomes invisible to those who are still suffering."

Intergroup responded to an interview request with an e-mailed statement. "It is the view of [Intergroup] that the matter of the complaint and the settlement is best left to the collective conscience of the AA members in the Greater Toronto Area.

"In addition, the only individuals who might appropriate comment on this matter are members of Alcoholics Anonymous and they, perhaps for obvious reasons, are disinclined to make themselves available to the media."

Agnostic gatherings began appearing on the Intergroup's online directory on the weekend.

Mr. Knight opted to take the issue to the Ontario Human Rights Tribunal, arguing that Intergroup was discriminating against him on the basis of creed.

Intergroup shot back that AA was protected by section 18 of the Human Rights Code, which allows a religious group to restrict participation to the faithful.

A tribunal adjudicator questioned the merits of the argument and allowed the complaint to proceed.

Before the case could go to a ruling, both sides opted for mediation that resulted in settlement on Monday. The delisted groups will be relisted and Intergroup will resolve to include people regardless of beliefs. In return, Mr. Knight and agnostic associates vowed to leave the 12 steps intact, God and all.

"Members will be allowed to interpret them however they choose," said Megan Evans-Maxwell, Mr. Knight's lawyer. "This reconfirms that the only requirement of being an AA member is the desire to be sober."

Against expectations, the agnostic groups actually grew stronger in their time away from the Intergroup fold. They launched their own website and grew from just two GTA meetings to 12. Over the same span, the number of agnostic AA groups worldwide has grown from 80 to 350. "We learned we don't need to put up with the dogmatic approach," said Mr. Knight, a member of the Unitarian church. "It's unnecessary and unhelpful." 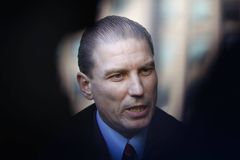 How Queen and Broadview's small businesses are losing to gentrification
February 3, 2017
New agency aims to attract foreign investment to Greater Toronto Area
February 2, 2017
Follow Patrick White on Twitter @Nut_Graf
Report an error Editorial code of conduct
Due to technical reasons, we have temporarily removed commenting from our articles. We hope to have this fixed soon. Thank you for your patience. If you are looking to give feedback on our new site, please send it along to feedback@globeandmail.com. If you want to write a letter to the editor, please forward to letters@globeandmail.com.
Comments