Canadian Blood Services told the federal government in January that the voluntary blood-donation system could be at risk if for-profit plasma collection is allowed to proliferate – six months before Health Canada gave a green light to the country's third paid plasma clinic, in Moncton.

The warning was included in a letter that Canadian Blood Services (CBS), which manages the blood supply outside Quebec, sent to Health Minister Jane Philpott as it pitched its own business plan to boost the amount of plasma it collects to make medications.

"Evidence from countries such as the U.S. and Hungary shows unpaid blood donors have been drawn away to become paid plasma donors," Leah Hollins, chair of the CBS board, wrote in a letter dated Jan. 23. "We cannot risk having this happen in Canada, and we are already seeing indication that the for-profit collector in Saskatoon is attempting to recruit regular unpaid whole blood donors who would otherwise donate to Canadian Blood Services."

The letter was obtained through an access-to-information request by Blood Watch, an advocacy group that opposes compensating donors for plasma, the straw-coloured liquid in blood that is used to make some intravenous medications.

How Canada obtains its plasma-derived drugs – including immune globulin, an antibody medication for which demand is skyrocketing – became a contentious topic after a private company unveiled its plan to open a chain of paid-plasma clinics in this country.

The company, Canadian Plasma Resources (CPR), opened its first site in Saskatoon last year and its second in Moncton just last month. (A small paid-plasma clinic run by a different organization has operated in Winnipeg for decades.) Health Canada granted the Moncton site a licence on July 17.

Kat Lanteigne, the executive director of Blood Watch, said the approval of the Moncton clinic shows that Dr. Philpott is "ignoring the risk" flagged by CBS in its letter.

The letter cites an internal Ipsos poll that found seven out of 10 Canadians between the ages of 18 to 34 think it would be acceptable to pay people for their plasma; half said they would choose donating plasma for money over giving it away to the publicly funded system.

"That's really serious," Ms. Lanteigne said. "The fact that 50 per cent of them thought it was good idea to go to a private clinic over Canadian Blood Services is a massive warning sign."

Dr. Philpott was not available for an interview Tuesday, but her spokesperson, Andrew MacKendrick, said by e-mail that the minister is "aware of the concerns" around paid plasma.

As he pointed out, Health Canada has already asked an expert panel to take a deeper look at the "security and sustainability" of the country's immune globulin supply, including how a significant expansion of plasma collection might affect the overall blood system. The panel was announced 10 days before the Moncton clinic received its licence.

Health Canada also pointed out by e-mail that as a regulator, its job is simply to ensure that plasma clinics are operating safely. It's up to the provinces to decide if payments for blood products should be banned. Only Quebec, Ontario and Alberta have moved to make such payments illegal.

Donating plasma takes about 90 minutes and can be done as often as once a week. Most whole blood donors can safely give about once every two months. Dr. Philpott and CBS officials have said publicly that plasma from paid donors is safe.

Barzin Bahardoust, CPR's chief executive officer, disputed the suggestion that his plasma clinics – which pay $30 to $50 in Visa gift cards per donation, depending on how often a person gives plasma – might siphon off donors from the voluntary system. Mr. Bahardoust said fewer than 10 per cent of the donors at his Saskatoon clinic identified themselves in a questionnaire as being former regular blood donors at CBS.

He said CPR has also agreed, as part of the conditions on its new licence in Moncton, to survey donors there to determine what percentage of them were former active blood donors for CBS, something Health Canada confirmed. Mr. Bahardoust added that his company is thrilled about the appointment of the expert panel. "We're happy and excited that finally an objective and fact-based discussion can take place around this issue."

One of the issues the expert panel is sure to explore is whether Canada is relying too heavily on plasma-derived medications purchased from the United States, where most donors are paid.

Graham Sher, the chief executive officer of CBS, said in January that Canada could be vulnerable to disruptions in immune globulin supply if the country does not start collecting more plasma at home. Right now, CBS only collects enough plasma to meet 17 per cent of Canada's demand for immune globulin.

The intravenous medication's uses include: fighting infections in people with poorly functioning immune systems, such as leukemia patients; treating a crippling type of nerve disorder; and preventing aneurysms in patients with Kawasaki disease, which causes inflammation in the walls of some arteries.

CBS's goal is to have unpaid Canadian volunteers provide the raw material for half of all the immune globulin needed in this country by 2024. To get there, the blood agency is proposing opening as many as 40 new plasma collection centres across the country and attracting upward of 144,000 new voluntary donors.

CBS declined an interview request Tuesday, instead referring The Globe and Mail to a statement it released in January announcing it had sent a plasma business plan to all the provinces and territories that fund CBS. 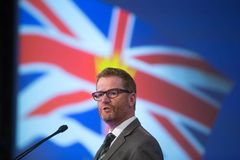 Opinion
It takes more than laws to boost organ donations
January 17, 2017
Follow Kelly Grant on Twitter @kellygrant1
Report an error Editorial code of conduct
Due to technical reasons, we have temporarily removed commenting from our articles. We hope to have this fixed soon. Thank you for your patience. If you are looking to give feedback on our new site, please send it along to feedback@globeandmail.com. If you want to write a letter to the editor, please forward to letters@globeandmail.com.
Comments