Canada's Immigration Minister denies his government was poorly prepared for the surge of asylum seekers streaming on foot into Quebec from the United States this summer, even as federal officials intensify efforts to try to curb the flow of those showing up at irregular border crossings.

"We were prepared. We were always on top of this," Ahmed Hussen said in an interview.

The federal government is dispatching a Liberal MP to Miami and using social media to try to counter "misinformation" that appears to be driving migrants, mostly Haitian, to walk across the border at unmanned Canadian crossings. More than 7,000 people have illegally entered Canada since June, the RCMP say.

Liberal cabinet ministers have also multiplied appearances and become more vocal about how Canada is handling the cross-border surge. Prime Minister Justin Trudeau, who said Sunday that those streaming in on foot gained no advantage, attends a new federal-provincial task force on so-called "irregular migration" in Montreal on Wednesday. The Prime Minister will also meet with local Haitian community leaders.

While the Liberals intensify their public declarations on the influx, the opposition in Ottawa says the government was ill prepared for the surge in claimants. Ottawa has had to build tent encampments at the border and opened centres such as the Olympic Stadium in Montreal to temporarily house the asylum seekers, as the influx stretches resources in Quebec.

The Immigration and Refugee Board (IRB) was already raising the alarm that it needed more resources, and faced a backlog in claims, even before the spike in arrivals this summer. Mr. Hussen insisted his department can handle the influx by redeploying staff and resources from across the country to "pressure points" such as Quebec. The Immigration Minister says initial screening interviews with applicants, which used to be done within 72 hours, have extended to "a few weeks." (Refugee groups and asylum seekers themselves say they have been given appointments for the fall and even winter; Mr. Hussen said these wait times have already shrunk).

Once the applicants pass their initial clearance, they get in line for a hearing with the IRB. These are supposed to take place in 60 days; Mr. Hussen says the delay is extending to five months.

Mr. Hussen says Canada is part of a global trend that is seeing mass displacements of refugees, and their movements will always be unpredictable.

"Every country faces this," he said. "Asylum seekers are the one part of the immigration system that we don't have a complete amount of predictability and control over."

Several asylums seekers have said in interviews that Mr. Trudeau was part of the reason they migrated northward from the United States.

But Mr. Hussen said the Prime Minister's tweet is consistent with Canada's approach to the Haitian asylum seekers.

"What the Prime Minister was talking about is that we always welcome those in need of protection, and we have," Mr. Hussen said. "But we're also saying that that welcome, and the humanitarian aspect of our immigration system, has to be done in an orderly manner, and people seeking asylum have to follow the rules."

He added: "Coming to Canada through irregular means is illegal, we discourage it and we believe it is potentially dangerous, and anyone who tries to do that will not get any special advantage."

The dramatic rise of claimants has also spurred some apprehensions in the communities in which the newcomers are temporarily settling. Far-right groups have used the surge in migrants at the Canada-U.S. border to spread anti-immigrant messages. An anti-immigrant banner was hung outside the Olympic Stadium during the night on Sunday, before officials spotted it and removed it a few hours later.

"I don't want anyone to demonize people who are in search of protection and sanctuary," Mr. Hussen said. "It saddens me that there is a minority of individuals who would use a humanitarian situation to fan the flames of hatred and intolerance." 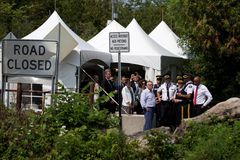 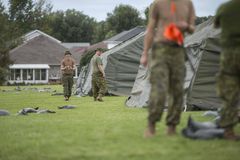 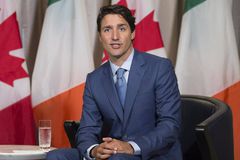