The gunman who killed a soldier and shot up Parliament tried to fight off his drug addiction with constant prayer, according to friends and acquaintances who saw him in his final years in Vancouver and his final days in Ottawa.

A fellow resident of The Beacon shelter in East Vancouver said he met Michael Zehaf-Bibeau in 2012 in detox, where he was fighting off an addiction to crack cocaine and heroin.

Several residents at the Ottawa Mission, one kilometre from the scene of the first shooting, said Mr. Zehaf-Bibeau had first appeared at the shelter on Oct. 2. They knew him primarily as a social, outgoing young man who said he had ridden a bus to Ottawa from Vancouver in order to straighten out some passport problems.

One volunteer at the shelter, Abdel Kareem Abubakir, bonded instantly with Mr. Zehaf-Bibeau over their shared faith and Arabic language. "I knew him for two weeks," he said. "I noticed some problems with him, some issues with faith. He was very pious. I tried to discuss with him these issues. But he seemed very extreme."

Mr. Zehaf-Bibeau carried the Koran with him everywhere "to help heal himself from drugs," but soon the temptation overcame him. "For two weeks he was communicative, Mr. Abubakir said. "But then when he collapsed into drugs, he became isolated. He was isolating himself. He was always sleeping. For three days he wasn't talking. His intention was to get passport and get home. He had to stay away from drugs."

His problems did not seem to originate from mental-health problems, Mr. Abubakir said, but from drug use. "He was a very sharp-minded, talkative, social person. He has no problem with the mental."

While Mr. Zehaf-Bibeau earned praise from staff and residents for helping to translate for an elderly tenant who spoke only Arabic, his demeanour soured in recent days. Several residents overheard him yelling angrily into a lobby telephone after several rental-car outlets declined his business.

Mr. Zehaf-Bibeau has a criminal record for drugs from several jurisdictions, including Montreal and the Vancouver region. The 32-year-old's descent appeared to be dramatic from his days as a popular high school student in Laval, a suburb just north of Montreal. The murderous rampage seemed to catch the gunman's own mother off guard.

Susan Bibeau, writing on behalf of her and her husband, Bulgasem Zehaf, issued a statement Thursday saying she spoke to her son last week over lunch but the couple have "no explanation to offer" for the shooting in which Corporal Nathan Cirillo was killed.

"I am mad at our son, I don't understand and part of me wants to hate him at this time," Ms. Bibeau said in the statement e-mailed to The Associated Press. "You write that our son was vulnerable, we don't know, we [he] was lost and did not fit in."

Ms. Bibeau, deputy chair of a division of the Immigration and Refugee Board, said she had not seen her son in at least five years before last week's lunch.

"I have very little insight to offer. We don't wish to be part of any media circus, we don't think it will add anything to the conversation. Please respect our privacy," she wrote.

The couple expressed condolences to the family and friends of the dead soldier.

"No words can express the sadness we are feeling at this time. We are so sad that a man lost his life. He has lost everything and he leaves behind a family that must feel nothing but pain and sorrow. We send our deepest condolences to them although words seem pretty useless," the e-mail said.

"We are both crying for them. We also wish to apologize for all the pain, fright and chaos he created."

With reports from Ingrid Peritz in Montreal, Andrea Woo in Vancouver and Associated Press. 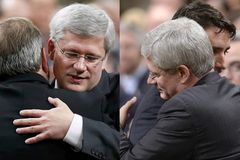 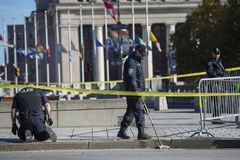 Follow Patrick White and Les Perreaux on Twitter @Nut_Graf @Perreaux
Report an error Editorial code of conduct
Due to technical reasons, we have temporarily removed commenting from our articles. We hope to have this fixed soon. Thank you for your patience. If you are looking to give feedback on our new site, please send it along to feedback@globeandmail.com. If you want to write a letter to the editor, please forward to letters@globeandmail.com.
Comments are closed