Ottawa police now say the death of an acclaimed Inuit artist whose body was found in a downtown river is suspicious, and they are investigating the remarks of one of their officers who, in noting that Annie Pootoogook was indigenous, said it was possible that she merely got drunk and fell in the water.

Ms. Pootoogook, 46, who was originally from Cape Dorset in Nunavut, was internationally renowned for her ink and crayon drawings of life in her Arctic community. For several years, however, she had lived a hard life on and off the streets of Ottawa and, by her own admission, had been fighting an alcohol addiction.

The Taken: Five women, five serial killers and how their paths came to meet

Her body was pulled from the Rideau River on the morning of Sept. 19, a short walk from the shelter where she had been living, and just weeks after the launch of a historic two-year, $54-million national inquiry into missing and murdered indigenous women.

But an Ottawa police officer said in the comments section of a news story in the Ottawa Citizen last Saturday that she should not be counted among the nearly 1,200 cases that are the focus of that effort.

"And of course this has nothing to do with missing or murdered Aboriginal women … it's not a murder case," wrote Sergeant Chris Hrnchiar, "it's [sic] could be a suicide, she got drunk and fell in the river and drowned who knows … typically many Aboriginals have very short lifespans, talent or not."

Ottawa Police Chief Charles Bordeleau said in a statement on Tuesday that "a chief's complaint has been initiated and an investigation is under way" into the comment of Sgt. Hrnchiar. That means the internal affairs section of the force has been asked to look into the officer's behaviour to determine whether any policies or laws have been broken and whether charges may be warranted.

The president of Inuit Tapiriit Kanatami, an Ottawa-based national organization representing Inuit, called the sergeant's statements "overtly racist" toward an already marginalized population that is too often demeaned in online forums.

"The idea that the people who are supposed to protect all citizens, and who are responsible for implementing the laws in this country, are the same people who are making these types of comments about somebody who just lost their life … is shameful," said Natan Obed.

Mr. Obed said the sergeant's public musing speaks to the need for a national inquiry, though he said he hopes issues such as institutional racism will be addressed immediately, long before the commission issues its final report in two years.

Ms. Pootoogook was the 2006 winner of the prestigious $50,000 Sobey Art Award which goes to young Canadian artists and exhibitions of her work have been mounted in Toronto, Montreal and the United States. When the Ottawa police issued a news release last Friday identifying her as the woman found in the river, they said they did not suspect foul play.

But Staff Sergeant Bruce Pirt of the force's major crimes unit said Tuesday there was always something suspicious about her death.

"The initial general assignment investigators that go to the scenes of sudden deaths and suicides looked at it and said 'hmm, there is something about this' – and I can't go into the details of what it was – 'that is tweaking our curiosity,'" said Staff-Sgt. Pirt. "And, we're like, okay, you know what? There is something odd about this, we'll grab the case and we'll look at it."

Although an autopsy has been completed, Staff-Sgt. Pirt would not elaborate on the cause of death.

Ms. Pootoogook's brother Goo, who also makes drawings and still lives in Cape Dorset, said he was not surprised when a cousin called him from Ottawa to say that police had found some details of the case suspicious.

"Not at all surprised," he said. "We would tell her, 'You're hanging out with a lot of shady, dangerous, violent people.' But she just kept at it."

Mr. Pootoogook, who last saw his sister during a visit to Ottawa in December, said she told him and his wife that she was often victimized by her boyfriend. "She said, 'I'm sick of this guy, he's beating me up and taking my money.'"

Mr. Pootoogook says that his family had expected to receive his sister's body for burial in Dorset this week. "It looks like it's going to take a little longer, because of the suspicious situation she's in right now."

The national inquiry into missing and murdered indigenous women is expected to examine police policies and practices, as well as systemic racism among police, including the RCMP. The independent probe was spurred by grassroots advocacy, as well as by a 2014 RCMP report that found there were 1,181 police-reported homicides and long-term disappearances involving indigenous women across Canada between 1980 and 2012.

Victims' families have long worked to expose racism on police forces, particularly as it relates to the quality of the investigation into the death or disappearance of their indigenous loved one.

Inuit leaders on Tuesday expressed their condolences to Ms. Pootoogook's loved ones and highlighted the challenges that some Inuit face in transitioning from life in the north to urban centres in the south.

Rebecca Kudloo, the president of Pauktuutit, which represents Canada's Inuit women, said she could not comment on what may have happened to Ms. Pootoogook, given the investigation, but said the loss is being felt across the country. "I hope in time that we can take comfort in the legacy of her art," Ms. Kudloo said in a statement to The Globe. "Her spirit will remain a part of this country's history." 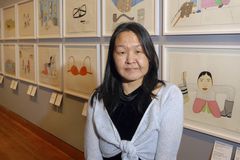 Follow Gloria Galloway, Kathryn Blaze Baum and Robert Everett-Green on Twitter @glorgal @KBlazeBaum @RobertEG_
Report an error Editorial code of conduct
Due to technical reasons, we have temporarily removed commenting from our articles. We hope to have this fixed soon. Thank you for your patience. If you are looking to give feedback on our new site, please send it along to feedback@globeandmail.com. If you want to write a letter to the editor, please forward to letters@globeandmail.com.
Comments are closed