The federal government is set to join the provinces in lowering the cost of prescription drugs by co-ordinating their purchases, a move that could signal a new era of co-operation between Ottawa and provincial leaders.

The collaboration is expected to come as early as this week when Federal Health Minister Jane Philpott joins her provincial and territorial counterparts for a meeting in Vancouver. The meeting is the first in what will be a critical year as Ottawa works to hammer out a new deal on health that will set national standards and deliver the stable funding promised by the Liberals during the election.

The new federal minister, herself a family doctor, said she expects this week's meeting to be the beginning of a "year-long project" to reach a new health accord and lay the groundwork for transforming Canada's health system.

Even before the two days of meetings begin Wednesday, a number of provincial health ministers are staking out their positions on future federal health transfers. Some, such as B.C. Health Minister Terry Lake, want extra per-capita funding for seniors, while Manitoba Health Minister Sharon Blady said the same consideration should be given to First Nations populations. Alberta Health Minister Sarah Hoffman, whose province stands to lose if transfers are adjusted based on age, is opposed to such changes.

Dr. Philpott, who will join the meeting on the second day, wants to steer the talk away from dollars. "My hope is that we won't allow ourselves to be inappropriately distracted by conversations about details of the transfer at this stage of the conversation," she said.

Dr. Philpott said reducing the cost of prescription drugs is one of her top priorities. "Canadians pay some of the highest costs for prescription drugs. That is an area that I am quite determined to address," she said.

Joining the Pan-Canadian Pharmaceutical Alliance, an initiative started in 2010 by the provinces and territories to drive down costs of publicly funded drug programs through bulk buying, is the first step, she said.

Federal drug programs that cover the military, First Nations and inmates make Ottawa the fifth-largest spender on pharmaceuticals in Canada, Dr. Philpott said. "We will be a major buyer that will be coming to the table and participating in the bulk purchasing, which I think obviously will help our purchasing power," she said.

The new federal government is looking at other ways to reduce drug costs, she said, including changes to the Patented Medicine Prices Review Board, the quasi-judicial body that regulates the prices of patented drugs.

A study this fall by the Organization for Economic Co-operation and Development ranked Canada as the fourth-highest spender on pharmaceuticals among 29 countries when measured by population. Pharmaceutical spending in Canada worked out to $713 (U.S.) a person in 2013, well above the OECD average of $515.

Steve Morgan, a professor of health policy at the University of British Columbia, said the federal move to join the Pan-Canadian Pharmaceutical Alliance is a sign of "good will and good faith," but pointed out the majority of Canadians pay for prescriptions out of pocket or through private drug plans.

Home care is another priority for the federal Health Minister, following on the Liberal party's $3-billion campaign pledge. Dr. Philpott wants to tie new federal money to performance targets, but said it's too soon to say what they will be.

Mr. Lake, B.C.'s Health Minister, who will lead the provincial-territorial talks, said the issue of physician-assisted death also must be a top priority, given last week's Supreme Court ruling. "We really need to have some serious discussions with the federal government over how they're going to move forward," he said. "I would prefer to see a consistent approach across Canada so that we don't develop different regulatory regimes in every province. That will be a topic of intense discussion." 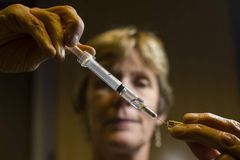