To Canadians and much of the world, the word "asbestos" is synonymous with poison and a slow, painful death. But to 7,000 people in southern Quebec, the word is the name of their home. Now they are struggling over whether to turn their backs on it.

Ottawa's announcement this week that it would ban the fibre has revived a debate in Asbestos about changing the town's name, a symbolic gesture that would, in effect, wipe the product and the word off the map.

"To improve the economy, I'm ready to analyze all proposals, including changing the name," the mayor of Asbestos, Hugues Grimard, said in an interview on Friday. "People are talking about it. I'm not closed to it."

From the archives: No safe use: The Canadian asbestos epidemic that Ottawa is ignoring

Read more: Asbestos in Canada: The politics, the economics, and the deadly legacy

The move would mark a rupture with a product that is threaded into the town's history, identity and very existence. For decades, asbestos was the bounty that paid for new homes and new cars, for hockey leagues, arenas and schools. Today, residents have learned to accept that their town's former "miracle fibre" is linked to deadly disease.

Yet Ottawa's announcement this week still felt like the final repudiation of what their fathers, grandfathers and great-grandfathers had devoted their lives to.

"The word 'ban' – it's pretty rough. There is no next step. It's over," said Ghislain Tessier, 30-year-old president of Transport ATD, a trucking firm just across the street from the yawning maw of the defunct Jeffrey Mine. His firm took over the offices of Transport Eastern, a trucking company that was called Transport Asbestos Eastern until the owners decided they had a branding problem and axed "Asbestos."

Mr. Tessier counsels his truckers about how to deal with U.S. customs agents who do not respond well to the name Asbestos on company shipping documents. "Americans are touchy about asbestos," Mr. Tessier said.

Although he knew this week's announcement was coming, it still bore the sound of the last nail being pounded into a coffin. "As long as there was no ban, there was always a glimmer of hope," said Mr. Tessier, vice-president of a local chamber of commerce. "[Asbestos] was our lives. It was our heritage. Now, we have to start the grieving."

Quebec's mines and workers have been central to the history of asbestos, their fortunes rising and falling with those of the fibre. Once, Canada dominated world production of the magic mineral vaunted as insulation and for its fire resistance. When its link to disease began to emerge in the 1970s, the town confronted the industry's slow, sputtering decline. Mining in Quebec was halted in 2011.

Quebec's former asbestos region found hope in Ottawa's pledge this week that mining and processing of asbestos residue, carried out to extract magnesium, would not be affected. Towns such as Asbestos and Thetford Mines are ringed by mountains of the tailings.

"We're reassured by that," Mr. Grimard said. "I don't want to dwell on the past. I'm turning toward the future."

Danick Pellerin is looking to the future too. A few years ago, with the help of an interest-free loan from a provincial $50-million diversification fund, Mr. Pellerin and two friends from Asbestos started a microbrewery called Moulin 7. Its pub is decorated with items recycled from the closed mines, and its beers evoke the town's roots with names such as L'Or Blanc (White Gold) and Mineur (Miner, which picked up a gold medal at this year's World Beer Awards). This fall, the three launched a beer called Ciel Ouvert – loosely, Open Pit – using the underground well water from the old Jeffrey Mine, which was tested for purity. The town's past is brewed into every pint.

"Asbestos is finished. The industry is dead," said Mr. Pellerin, 40, who believes it is time to change the town's name. "We're not renouncing our past, but we could move on to something else. Not everybody understands when they see "Asbestos" stamped on a package of meat. In the U.S., asbestos means cancer. It means death. It's not a winner as a name."

Not so for Pierrette Théroux, the long-time head of the Asbestos Historical Society. Ms. Théroux, 77, recalls as a girl how she would wake up to the screens of her home covered in snow-like asbestos dust. Walking on the porch would leave footprints. But safety measures tightened, and she is among those in the region who defiantly insist asbestos can be mined safely. She believes politicians are picking on asbestos.

"It's like a battle against giants. We're David and they – the people who denigrate asbestos – are Goliath. I feel great sadness this week. It's like they're saying to us, 'You're still poison.'" No question for her about changing the town's name. "It's part of our history, of who we are. Asbestos was a source of life for us, even if they said it made people die."

In 1949, a little-known intellectual named Pierre Trudeau made his name in Quebec when he came to Asbestos to fight for workers' rights during a strike that became a watershed moment in the province's history. Mr. Trudeau marched with the workers and gave fiery speeches. Some 67 years later, his son, Prime Minister Justin Trudeau, began definitively to close a chapter on the town's story.

The government acted on years of lobbying from union and health professionals, and irrefutable evidence of asbestos's harm. People in Asbestos hear the same evidence. But as asbestos disappears from Canada's horizon, they are left to wonder whether their town's name deserves to die with it.

Canada’s move to ban asbestos a ‘win for public health' but long overdue: advocates
May 17, 2018 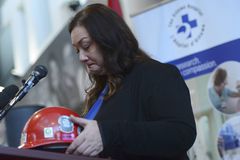 No safe use: The Canadian asbestos epidemic that Ottawa is ignoring
August 24, 2017 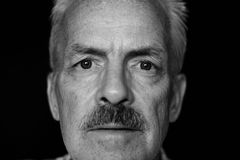 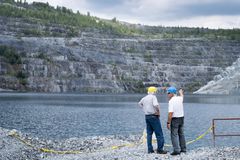