Actress Pamela Anderson and Simpsons co-creator Sam Simon did not exactly receive a red-carpet welcome when they turned up at the Newfoundland office of the Canadian Sealers Association with a million-dollar inducement to end the seal hunt.

The door was closed. And, when they tried to hold an outdoor news conference in the sub-zero weather in St. John's, a half-dozen sealers shouted at the celebrities from the street.

But Ms. Anderson, the Canadian-born honorary director of People for the Ethical Treatment of Animals, said in a telephone interview with The Globe and Mail she believes that she and Mr. Simon made their point during their Tuesday visit.

"It was a very heated, passionate little conference," Ms. Anderson said. "I was pleased. I expected a little heat."

Mr. Simon, a director and producer who has devoted large amounts of money to animal welfare, put up the million dollars and wrote a letter to Eldred Woodford, the president of the sealers association, urging that the money be used to facilitate a government buyout of the East Coast seal trade. He did not immediately respond.

After the World Trade Organization ruled last month in support of the European Union's ban on seal products, and given that many of the other markets have been closed, "the seal trade is finished," wrote Mr. Simon, who has terminal colorectal cancer and made the trip to Canada from California over his doctor's objections.

"That's why I am appealing to you as a trade leader to break the ice," he wrote, "and prompt a buyout like those that helped asbestos miners, tobacco farmers and workers in other collapsed industries."

The seal hunt, which brings in just a fraction of the revenues it once did, is heavily subsidized by both the federal government and the provincial government in Newfoundland and Labrador.

Animal-rights activists say its impossible to put a true figure on how many tax dollars have been directed at the industry because much of it flows through grants to companies and researchers. But, in this year alone, Newfoundland provided a $3.6-million loan to Carino Ltd., a seal processor, for the purchase of seals killed during the 2013 hunt.

Earle McCurdy, the president of the Fish Food and Allied Workers union, which includes sealers and rents an office to the sealers' association, said he found the stunt by Ms. Anderson and Mr. Simon offensive.

"They were being judgmental about somebody else," said Mr. McCurdy. "The idea that there's a price tag on everything and somehow they have some moral superiority that allows them to come down and kind of lecture us on how we live our lives down here – it was pretty obnoxious."

Mr. McCurdy said the only difference between the seal hunt and the slaughter of animals that end up on Canadians' dinner plates is that seals are harvested in the open.

But Mr. Simon said it is clear that the sealing industry is dying, "so why not grab this offer and have some fun and stop it?"

The million dollars would mean $2,500 for every active sealer, he said. "Which isn't supposed to be income. It's just saying 'here's a parting gift' if you bring this portion of your country into the 21st century." 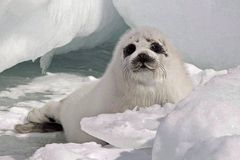 Seals, asbestos and oil: One of these things is not (yet) like the others
November 29, 2013
Canada suffers setback in challenge of EU ban on seal products
November 25, 2013 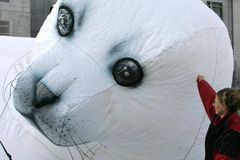 Hunting for logic in the WTO’s seal-hunt ruling
December 1, 2013 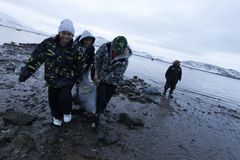