A precious cache of ice cores bearing 80,000 years' worth of climate history from the High Arctic has been significantly damaged by a freezer failure, officials at the University of Alberta have revealed.

The university confirmed on Thursday that 12.8 per cent of the collection was damaged in the incident.

The malfunction occurred over the weekend in a walk-in storage freezer on the university's Edmonton campus where one-metre sections of ice cores totalling 1.4 kilometres in length have been housed since March 24.

The problem was accompanied by a separate failure of a monitoring system so that rising temperatures within the facility were not detected until firefighters responded to a heat alarm on Sunday afternoon. At that point, the temperature in the freezer was 40 C and some of the ice cores had partly melted.

When the mishap was discovered, the ice cores were then moved to an adjacent freezer that was designed to be the work area where scientists can extract data from the samples.

Martin Sharp, a professor of glaciology and principal investigator for the collection, said his first reaction was one of disbelief when he found out what had happened. "The system was designed to either preclude such an event or to generate a rapid response to prevent core loss or damage."

He added that he was later relieved to learn that only a part of the collection had been affected.

In general, ice cores from the Arctic are of interest to climate researchers because they contain trapped gasses and particulates that can reveal climate variations across thousands of years as well as the circulation of industrial pollutants into the Arctic atmosphere during more modern times.

The collection at the University of Alberta comprises samples that were extracted from the northeastern Arctic and from Mount Logan in the Yukon, in some cases more than 30 years ago.

For many years, researchers with the Geological Survey of Canada housed and examined the cores at a facility in Ottawa. But in 2011, a downsizing of federal labs under Prime Minister Stephen Harper forced the search for a new home.

Following an agreement signed with the University of Alberta in 2015, preparations were made to ship the ice cores to a newly built $4-million research facility in Edmonton.

They were transported to the university in January, where they first resided in a temporary storage freezer before being moved to their long-term accommodations less than two weeks ago.

Researchers had been looking forward to applying new techniques to extract novel types of data from the ice cores, and the university hosted an international conference around the science the cores might yield last month.

In terms of source location, Dr. Sharp said the affected cores came from Ellesmere Island, Devon Island, Baffin Island and Mount Logan. In no case was an entire ice core affected by melting, and three ice cores from the Agassiz Icefield, on Ellesmere Island, were not affected.

"This incident will affect research, no question," said Dr. Sharp. "It rules out certain studies that we might have wanted to conduct on the cores, such as reconstructing continuous long-term histories where parts of the cores have been lost or contaminated."

Eric Steig, a glaciologist who studies ice cores at the University of Washington in Seattle and who spoke at last month's conference, said the loss was disappointing but likely not crippling for the archive or the Alberta facility.

Andrew Sharman, vice-president of the university's facilities and operations, said an investigation was under way to determine the precise causes of the multiple failures that took down the freezer system. He added that nothing similar arose when the system was tested for more than five months using buckets of ice as stand-ins for the ice cores.

"We are going to be as thorough as possible," he said. "And we are working to ensure this does not happen again." 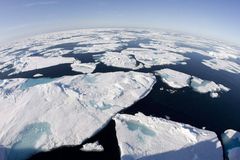