As a decision looms on part of Toronto’s aging Gardiner Expressway, cities across the country are facing their own difficult choices about building for the future, and what to do with infrastructure nearing the end of its lifespan.

A huge infrastructure bill is bearing down on Canada’s cities, where most people live and most of the country’s GDP is generated. And as cities grapple with the decay of highways and bridges built in the exuberant post-war era, a time when the car was king, there is increasing pressure to direct money to transit instead.

While the issue comes to a head in Toronto – city council is to kick off Wednesday what is likely to be a divisive session over the future of the eastern Gardiner – similar debates about priorities are simmering across Canada. Commuting times are being weighed against city-building and cost against benefit.

And raising the stakes of these big-budget decisions, an increasing number of experts are saying that in the near future transportation will look very different than it does today. For example, Ontario Transportation Minister Steven Del Duca noted recently that self-driving cars – already being tested on public roads in the United States – could bring major changes.

“It’s got to become, quickly, a fairly fundamental aspect of how we plan [transportation],” he said. “You’re going to see, potentially, the opportunity to figure out how to get from here to there and see a dramatic drop in the number of cars and vehicles generally on our roads.” 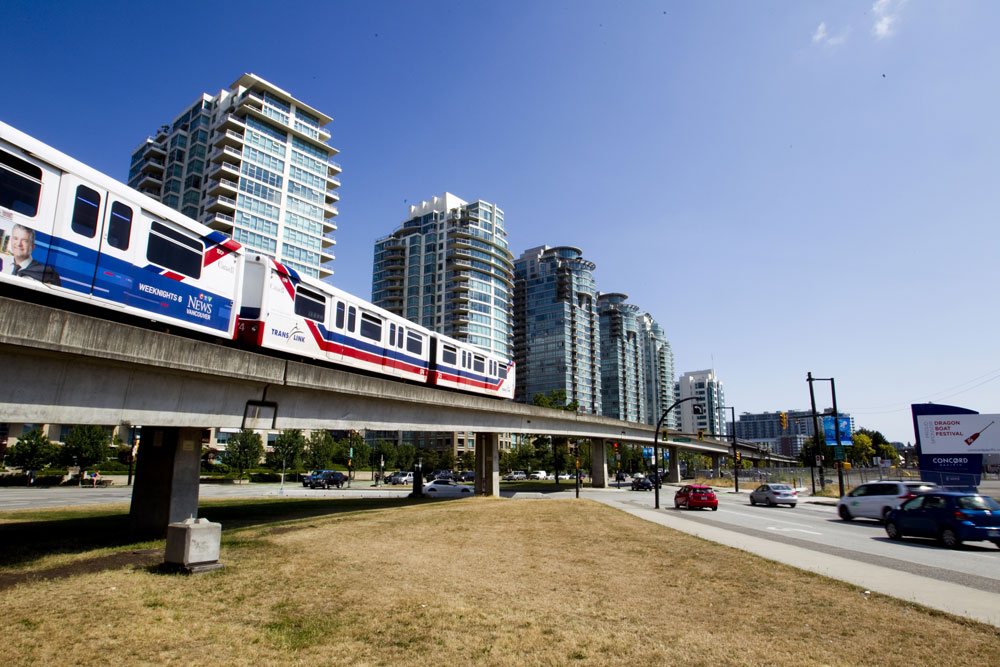 A SkyTrain is stalled on the tracks during a lengthy delay in service in Vancouver, British Columbia on July 21, 2014. (BEN NELMS for The Globe and Mail)

In Metro Vancouver, residents recently had the chance to weigh in on their transit and transportation future, voting on an expansion plan funded by raising the provincial sales tax 0.5 per cent across the region. But even as the area tries to plan for the next generation of movement, Vancouver is still mulling what to do with the vestigial remains of past transportation decisions.

There are two viaducts – relics of the freeway system that the city rejected in the 1970s – that could be torn down and replaced with a new street design, enhanced park space and affordable housing. There is growing public and political support for removing the viaducts, which would help make room for a new inner-city neighbourhood and turn Georgia Street, a main east-west artery in the city, into something of a grand boulevard.

Before year’s end, Vancouver council is expected to receive two reports from staff: one on what a new street system would look like after the two mini-bridges were torn down, and another on the neighbourhood design that would grow up around the new road model.

As in other cities, any opposition will likely centre on concerns over what it could mean for drivers. Although critics have so far been muted, that could change once the public gets a look at the planned road changes. Any sense that the new design might make the city’s already troublesome gridlock worse could incite enough hostility to kill the concept. 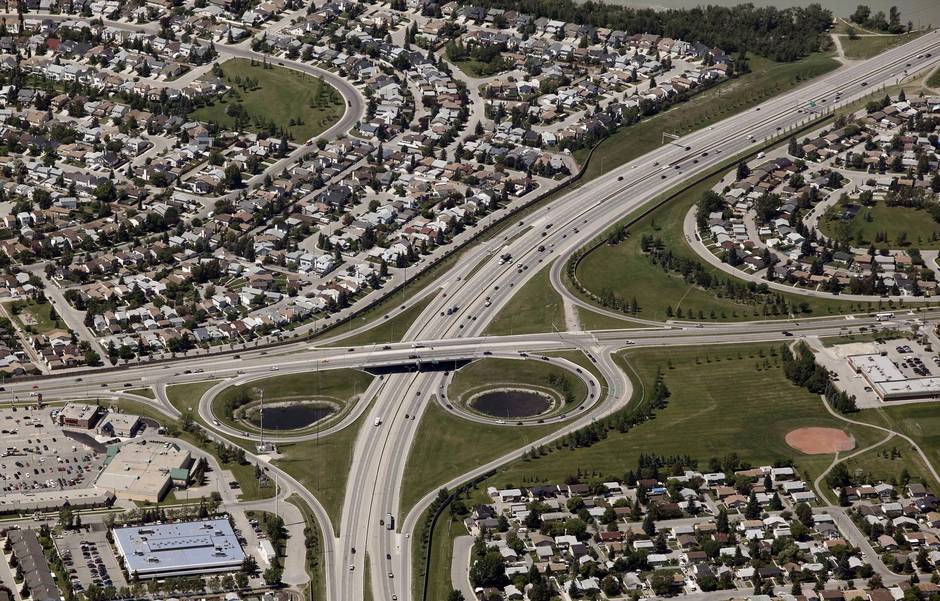 In Calgary – an expansive city of 825.3 square kilometres to Toronto’s roughly 630 – planners have to connect people across a big area. The chosen solution is to pour money into both rail transit and road infrastructure.

Currently, the big project is the southwest leg of the Calgary ring road, connecting Highway 2 in the south to the TransCanada Highway. Planning began in the 1970s and this portion is the last bit still to be done. However, the $1.8-billion project has seen a four-year delay and might not be ready for another decade.

At the same time, the city is looking at expanding its light rail transit (LRT) system with two new lines, collectively dubbed the Green Line, that would be a significant addition to the current LRT system. The $5-billion project is beloved by city council but remains under-funded. Council is looking into fast-tracking it if enough provincial money becomes available. 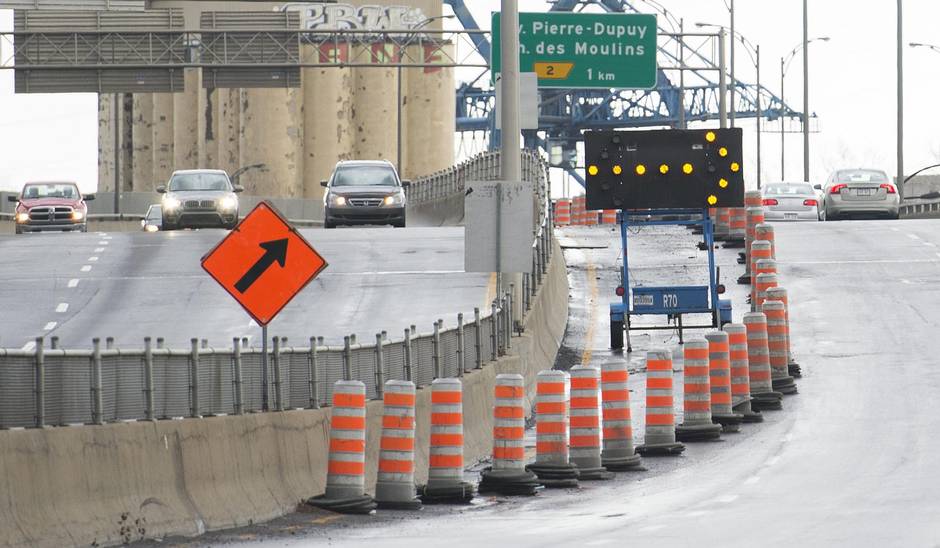 Montreal is debating tearing down the Bonaventure Expressway and replace the highway highway with a boulevard interlaced with green spaces and parks. (Graham Hughes/The Canadian Press)

In the Montreal region, all three levels of government have been on a highway spending binge since the 2006 overpass collapse that killed five people. Among the billions recently spent to expand and extend freeways, add new bridges and replace crumbling ones, construction is under way on a $5-billion St. Lawrence River span to replace the decrepit Champlain Bridge and a $3.7-billion spaghetti interchange known as the Turcot which is a main entry point from the western and South Shore suburbs into the city.

The highway money dwarfs recent public transit investment. Besides the inauguration of an $670-million underutilized commuter line last year, Montrealers last saw expansion in the Metro eight years ago, when three stops were added to the northern suburb of Laval at a cost of $740-million. Another extension toward the east has been promised repeatedly over the past two decades but seems no closer to completion.

In another long-gestating project – one that reflects Toronto’s Gardiner debate – Montrealers have wondered for years what to do about the Bonaventure Expressway. This is a kilometre of elevated highway that symbolically cuts off southwestern neighbourhoods from Old Montreal; there is a $142-million plan to replace the highway with a boulevard interlaced with green spaces and parks. Critics say this will still leave inner-city neighbourhoods cut off by an immense load of traffic on the nine-lane road. 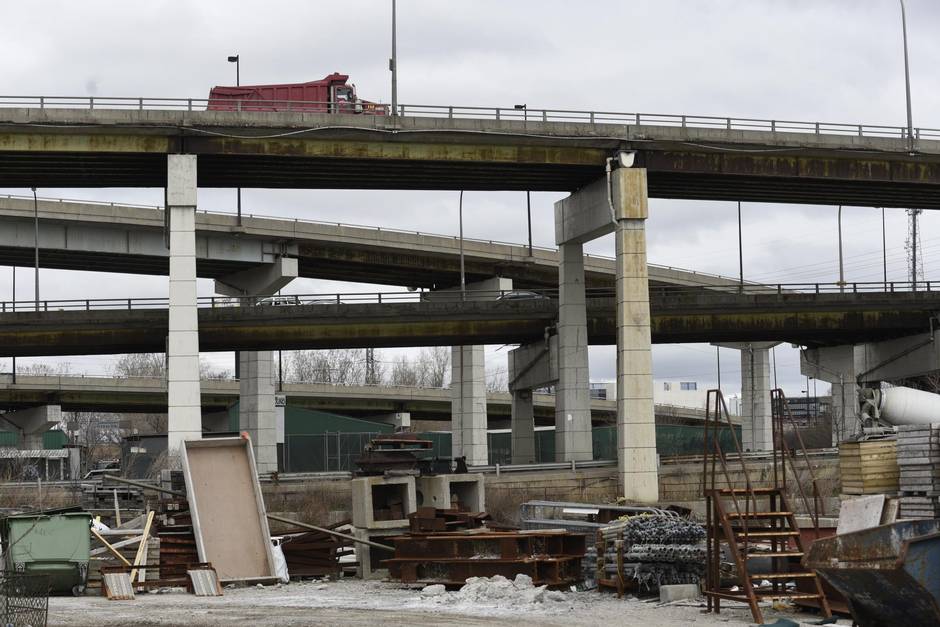 Toronto city council is set to debate the fate of the eastern end of the Gardiner Expressway, though with sides evenly matched, a reolution won’t be easy. (Fred Lum/The Globe and Mail)

In Toronto, the issue of the Gardiner Expressway has similarly hung over council for years. The highway was built at a time when its route went through industrial or empty spaces. In the decades since, the local development potential has boomed as the city reconnected with its waterfront. And although much of the Gardiner will remain as an elevated expressway regardless of what council does, the fate of the 1.7-kilometre stretch between Jarvis and the Don Valley Parkway could be decided this week.

It is the biggest decision to come before this council and could shape the eastern downtown for decades.

Two main options on the table are keeping the eastern Gardiner as an elevated expressway but moving some of the ramps, at the long-term cost of $921-million, or replacing it with a boulevard for $461-million. The first option is faster for the minority of commuters who would be affected by a tear-down, while the latter opens up more city land for development.

Mayor John Tory came out strongly weeks ago in favour of keeping the Gardiner as an elevated highway and warned of “traffic chaos” if it is removed. In a speech this week, he painted a dire picture of the effects of a tear-down, and his official Twitter account later that evening warned darkly about “freight trucks in front of your house.”

Opponents point out that the city’s environmental assessment projected delays of a few minutes for people commuting downtown, and that only 3 per cent of those coming into the core do so on that highway. All future growth is expected to be carried by transit, which is now bulging at the seams.

With both sides entrenched and a roughly equal number of councillors having come out in support of either option, the debate is expected to run long. And it remains possible that neither option will secure a majority on council, leading to a move to defer and seek more information.

A group of prominent Torontonians – including two former mayors, business leaders and public officials – added their voices to the debate Tuesday. In an open letter, they argue that the undecided councillors “hold the future of the city” in their hands.

“While we understand the concern about traffic congestion, rebuilding this elevated highway will not ‘relieve’ it; it will only postpone finding real solutions to the serious problem of mobility in our rapidly growing city,” the letter reads. It adds that most residents rely on transit to get to work downtown. “Their real need,” it says, “is investment in improving that experience.”