For decades, her creations have been wrongly attributed to men — but after a two-year investigation of her work, the daughter of a former Prince Edward Island lieutenant governor is finally getting credit long overdue in what a researcher calls a "little feminist victory."

The Confederation Centre Art Gallery in Charlottetown opened its "Introducing Caroline Louisa Daly" exhibit over the weekend, but it's hardly the first time her paintings have graced its halls. Some pieces have been part of the gallery's permanent collection since the 1960s.

But the paintings and drawings were for years wrongly attributed to Charles L. Daly and John Corry Wilson Daly — Ontario men who were of no relation to Caroline Louisa Daly.

"I don't think it was a malicious misattribution by any means, but I think it's just all too easy to forget the accomplishments of women sometimes," said gallery registrar Paige Matthie. "(That was) the driving force that kept me going back to it over and over again ... to give credit to a woman who we've never, ever acknowledged before."

Caroline Louisa Daly was born in the 1830s, the daughter of P.E.I. lieutenant governor Dominick Daly. Matthie said she illustrated her travels as her father moved from post to post in the British colonial administration. From Charlottetown to the cabin of a ship destined for Australia, Daly rendered the scenery of her daily life with great care for detail, said Matthie, who noted Daly also found inspiration in the "sublime Canadian wilderness scenes" of other artists.

Matthie said her investigation began when a 2014 gallery visitor from the United Kingdom questioned the identity of the artist known as "C.L. Daly" after recognizing his great-grandmother's signature on the works.

After searching the archives, Matthie couldn't find any evidence to substantiate the gallery's attributions, so she went back to "square one." She used public records to compile histories of each of the contenders, trying to line up biographical details with stylistic clues in the art.

"It can be difficult to track down women in history, so it's often easier to go through their father or husband," Matthie said. "It became very clear that her biography kind of matches up with the trail that the artwork tells."

Matthie said Caroline Louisa Daly was not professionally trained, but at the time, it was not uncommon for women of privilege to be versed in some form of art. Matthie said this mode of expression was often "trivialized" as a hobby, but it's clear that Daly took her art very seriously, experimenting with different styles and subjects throughout her life.

After two years of research, Matthie is confident that Caroline Louisa Daly is the creator of the idyllic Island landscapes, intimate home sketches and illustrations of wilderness scenes. Matthie said she's surprised the connection wasn't made sooner, given Daly's strong connection to P.E.I. as the daughter of a prominent political figure.

"It feels like a little feminist victory in correcting the wider historical narrative," Matthie said. "History as a whole has a bit of a way to go to understanding the experience of women, so it's totally possible that there are mistakes still out there."

As for the two men who had been given attribution for the works: Matthie said Charles Daly was clerk for the City of Toronto as well as an arts instructor for a local college, while John Corry Wilson Daly was a merchant and politician based in Stratford, Ont.

Matthie said she envisions "Introducing Caroline Louisa Daly" as a creative twist on the Victorian-era debutante ball, a "coming out" of sorts, with all eyes on the artist in the room.

The exhibition runs through May 7 and features works from the gallery's collection, public archives and previously unseen works donated by Daly's descendants. 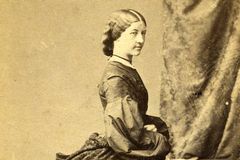