For sherpas trying to recover Shriya Shah-Klorfine's body from Mount Everest, it will be a long, hard job, descending the mountain with her remains tied to a sled, in a controlled slide down steep, icy and snow-covered slopes.

The sherpa team that was supposed to leave Thursday to look for Ms. Shah-Klorfine's body was delayed by an avalanche.

The 33-year-old Toronto resident died of exhaustion and lack of oxygen near the South Col, at about 8,310 metres above sea level. She was one of four climbers who died on Everest Saturday.

Finding her body will be the easier part of the task, said Alan Arnette, an American climber who reached the summit last year after three previous attempts.

First they will have to slide the body down a snow-covered slope. "It's on an angle anywhere from 30 to 60 degrees . . . It's pretty steep," Mr. Arnette said.

Afterward, the team would then have to negotiate the western face of the Lhotse, the mountain that abuts Everest.

"[The Lhotse Face]is extremely steep, it's very, very icy . . . . I've seen them take down injured climbers. It's slow, it's hard on the muscles and you're scared you're going to let loose on the ropes and everybody comes tumbling down."

The body would be taken as far as Camp II, at 6500 meters, the highest spot where a helicopter could safely land to airlift the remains away.

Such difficulties explain why the bodies of 100 to 200 climbers have been left on Everest's upper reaches, frozen into eternity by the cold, dry surroundings.

"People go to these mountains and they know good and well that they might die and that their bodies might stay there," Mr. Arnette said.

Over the years, some of those victims have acquired their own macabre fame.

For years, on the southern route, just above the South Col, climbers passed by the frozen, sitting form of Hannelore Schmatz, a German climber who died in 1979.

Two Nepalese climbers, Yogendra Bahadur Thapa and Ang Dorjee, died in 1984 trying to recover her body, which the wind eventually blew over the edge.

Another well-known victim, the Indian climber Tsewang Paljor, is known among climbers as Green Boots, for the fluorescent footwear visible from the rocky outcrop under which he died in 1996.

Vancouver climbers Steve Curtis and Sam Wyatt, who reached the summit on Saturday, saw five bodies during their climb.

"We saw five and we know there's probably [more]who have died there and have been dropped off to the side. People push them off and cut them off ropes," Mr. Curtis said in an interview.

He said they chose the northern route believing that, while technically harder, it would be less hazardeous than the overcrowded southern route used by Ms. Shah-Klorfine.

A Spanish climber who was with them, Juan José Polo, died of exhaustion and his body remains near the Second Step, at 8,580 metres.

Mr. Curtis said he was told by the guides that their Spanish friend "just sat down and died."

Another Canadian, Ottawa climber Sandra Leduc, who tried to reach the summit last weekend but turned back, took the southern route.

"Lots of dead or dying bodies. Thought I was in a morgue," she tweeted

Mr. Arnette said that describing the mountain as a morgue is an hyperbole that detracts from the essential challenge of Everest.

"There's certainly bodies on Everest. There are bodies on other mountains around the world. That's part of high altitude climbing."

He said some Everest guide services ask climbers to sign a "body disposal form" outlining whether they want their remains recovered, at a cost of up to $30,000.

In recent years, some expeditions have set out to haul down litter left on the mountain: tent and climbing gear, human waste, even helicopter wreckage from a 1973 Italian expedition.

One of the four climbers who died Saturday, the German physician Eberhard Schaaf, who reached the summit three hours before Ms. Shah-Klorfine, was a member of the Eco Everest 2012 clean-up expedition.

A previous clean-up expedition in 2010 brought back four bodies. At the time, the widow of Rob Hall, a New Zealand mountain guide who died in the 1996 Everest disaster, asked that his remains not be disturbed.

Back in Kathmandu, Mr. Curtis, who climbed Everest to raise funds for the Take a Hike foundation for youth at risk, tried to described his mixed feelings as he described the death of Mr. Polo and the hardships he faced.

"It was a lot harder than I thought it would be," Mr. Curtis said.

Said Mr. Arnette: "There's nothing easy about climbing Everest. Independent of trash or bodies, you can have an absolutely perfect day with zero wind and still it'll be the hardest thing you'll ever have done in your life." 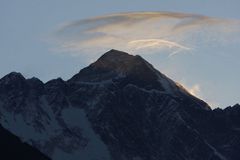 'Save me,' Canadian climber told sherpas after being urged to turn back
May 22, 2012 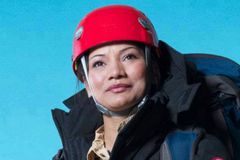 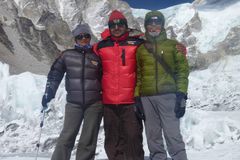 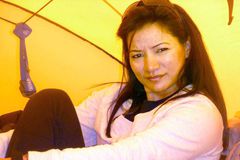