For three decades, Basil Joseph Borutski had accrued a reputation as an ill-tempered, violent man who hit his wife and girlfriends. His troubles also included convictions for assaulting a police officer and a cousin who was a jail guard.

On Wednesday, Mr. Borutski was accused of gunning down three women in a rampage the previous day that put a swath of the Ottawa Valley under lockdown for hours.

The 57-year-old Mr. Borutski was charged with first-degree murder in the deaths of Anastasia Kuzyk, 36, Natalie Warmerdam, 48, and Carol Culleton, 66.

Ms. Kuzyk and Ms. Warmerdam were former girlfriends who had filed complaints against Mr. Borutski for assault.

At the time of the women's deaths, Mr. Borutski was on probation and subject to community supervision by order of the court, Ontario's Ministry of Community Safety said. He had been convicted of choking Ms. Kuzyk with his hands, setting fire to some of her antiques, stealing her mother's car and being in possession of a cross-bow, in contravention of a court order.

"How can this man return to the community when he had a history of violence," said Hélène Mandy, a friend of Ms. Kuzyk. Ms. Mandy said Ms. Kuzyk and Ms. Warmerdam had sought restraining orders against Mr. Borutski.

The Crown stayed a charge that he committed mischief by urinating on the wall and floor of the holding cell at the courthouse.

Mr. Borutski's brother said his family is angry and embarrassed. "Our hearts go out to all the victims," Will Borutski said.

Ms. Kuzyk had been a waitress at the Wilno Tavern Restaurant and then became a real estate agent. "She was a really lovely lady," tavern owner Corinne Higgins said. "She was ambitious, she was personable, she was very attentive to customers and very easy to work with."

Ms. Warmerdam was a mother of two who worked as a nurse in a local hospice and lived on a farm in Foymount, Ont., said a neighbour, Gary Johnston.

The third victim, Ms. Culleton, is listed in a federal government directory as a human-resources staffer for Agriculture Canada. The Ottawa Citizen reported that she recently retired and that Mr. Borutski might have been living in a trailer on her property.

A 2011 decision in his divorce from his wife, Mary Ann Borutski, outlines allegations of conjugal violence and alludes with no further details to events such as "the mooning incident, the repeated threats to burn the home … Basil's marijuana cultivation, possession and dealing."

The ruling says Mr. Borutski was living in Kitchener, Ont., when his right hand was severed in a job-site accident and re-attached. He retrained as a millwright. A 1994 car accident left him with a permanent disability.

Ms. Borutski filed the first of several domestic assault allegations in 1985. She alleged during the divorce proceedings that their youngest child was conceived when her husband was facing a later charge because he believed "no judge would send a married expectant father to jail."

They broke off for the last time in August, 2008, after another alleged violent incident. By then, his sole income was workers' compensation and disability benefits.

Around 2 a.m. on New Year's Day, 2010, Mr. Borutski and a female passenger were stopped at an impaired-driving checkpoint. Officers let him through but, as he drove off, he shouted "Happy New Year" in a slurred voice.

He was convicted of refusing to take a breathalyzer test. At the trial, he claimed the OPP had harassed him for 16 years, but the judge ruled that Mr. Borutski "made ridiculous, unsubstantiated claims of police abuse."

The divorce case heard that he threatened to burn his house rather than see it go to his ex-wife. He unilaterally cancelled the fire insurance in July, 2010, and the house burned to the ground in January, 2011, the ruling said.

With reports from Rick Cash, Eric Andrew-Gee and The Canadian Press 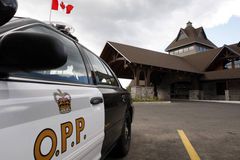