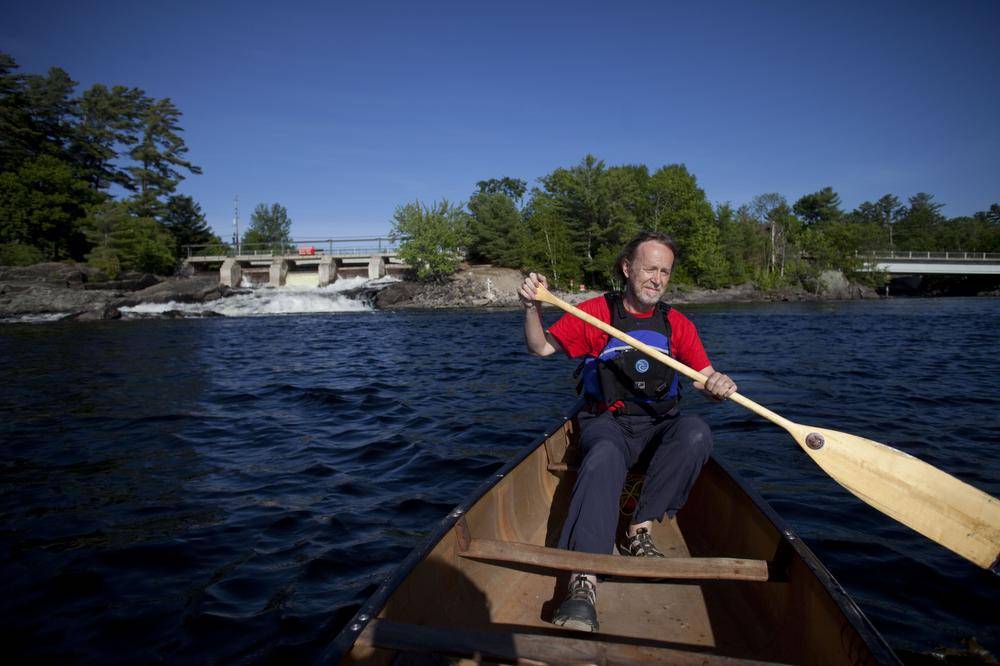 Allan Turnbull canoes near Bala Falls: Local residents are opposed to plans for a hydroelectric plant at the falls. (Matthew Sherwood / For The Globe and Mail)

Allan Turnbull plunges a wooden paddle into the Moon River, slowly steering his gold-coloured canoe toward the cascading Bala Falls. It’s a bright, blistering day, but the water is still a touch cool, swollen with the remnants of a late thaw and chilly spring.

Legendary cartographer David Thompson once followed this path, one of scores he explored by paddle and boat before Canada became a nation. Thompson recorded the 1837 trip in a journal, Mr. Turnbull explains over the river’s roar, his voice soon swallowed by the sound of water thrashing against the Canadian Shield.

If this was a little more than a year ago, we would stop Mr. Turnbull’s beaver-embossed canoe right here, just south of the north falls, and step out onto Burgess Island. We would heave the vessel over our heads and portage some 80 steps up a gravelly path to cross a two-lane road and enter Lake Muskoka.

But that’s illegal now, the well-worn route banned by the Ontario Ministry of Natural Resources in May, 2013 for safety reasons – the province says the waterfall, rapids and dam pose a risk to swimmers and canoeists. The government’s move has ignited an intrinsically Canadian legal battle over whether the public has the right to portage. The Ontario Court of Appeal will hear the case on Monday. 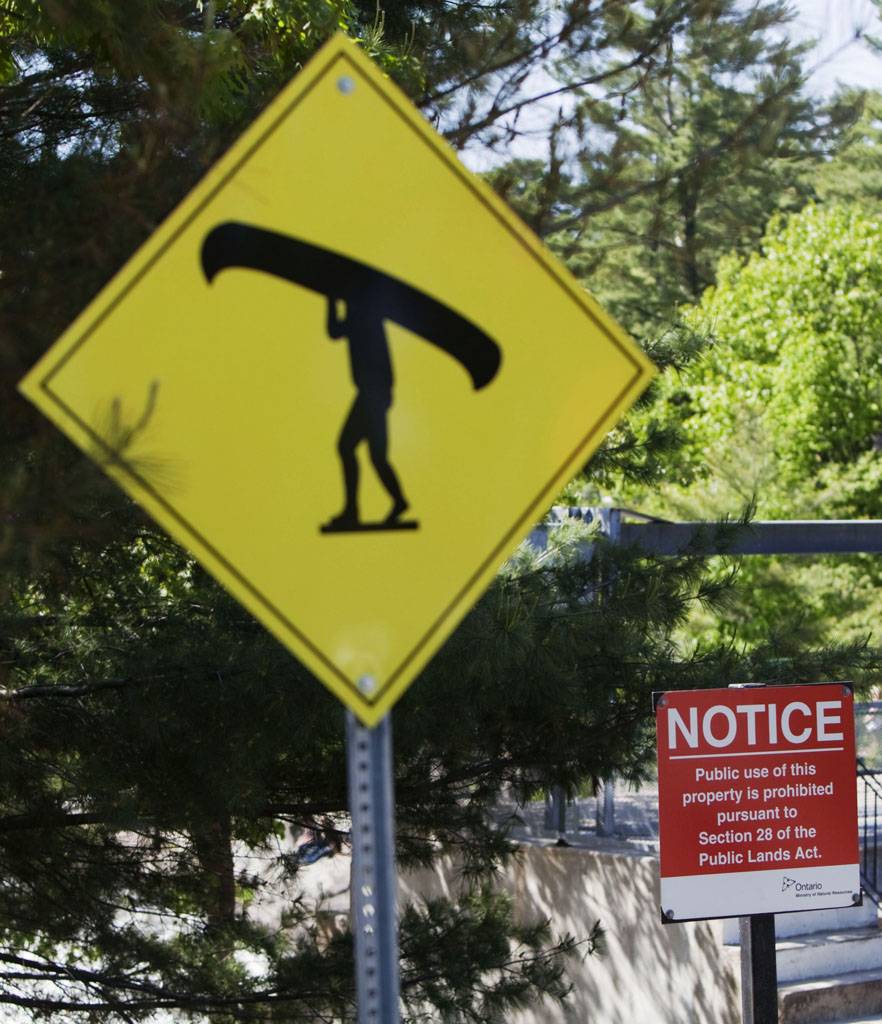 "It’s ridiculous, Canoeing is iconic in Canada. It’s how the country was opened up. "

“It’s ridiculous,” Mr. Turnbull says of the portage ban, his canoe out of the water and back on his lawn. “Canoeing is iconic in Canada. It’s how the country was opened up.”

Canoes are carved into how we picture ourselves and our colossal country. They were the vehicle of aboriginal fur traders and European map makers, of 16th-century explorer Jacques Cartier and the late prime minister Pierre Trudeau.

They are our summer camp memories, our weekend escape. When the world’s most powerful leaders descended on Ontario for the G8 summit four years ago, we showed them our canoes.

Few would debate that the canoe helped build Canada, but does that mean historic portages should be protected for all time at the expense of modern-day ambitions, such as growing the green-energy industry? Indeed, the Township of Muskoka Lakes’ portage battle is intertwined with a fervent fight against the Ontario government’s plan to build a hydroelectric power plant at Bala Falls.

In asking Ontario’s top court to protect the public right to portage, the township could in turn succeed in quashing the project it and many of its residents have long opposed.

“What happens here is going to impact not just the province of Ontario, but it will be a precedent for other jurisdictions,” says Alice Murphy, the township’s mayor.

Convincing the Appeal Court of this won’t be easy. The Ontario Divisional Court ruled against the township last summer. 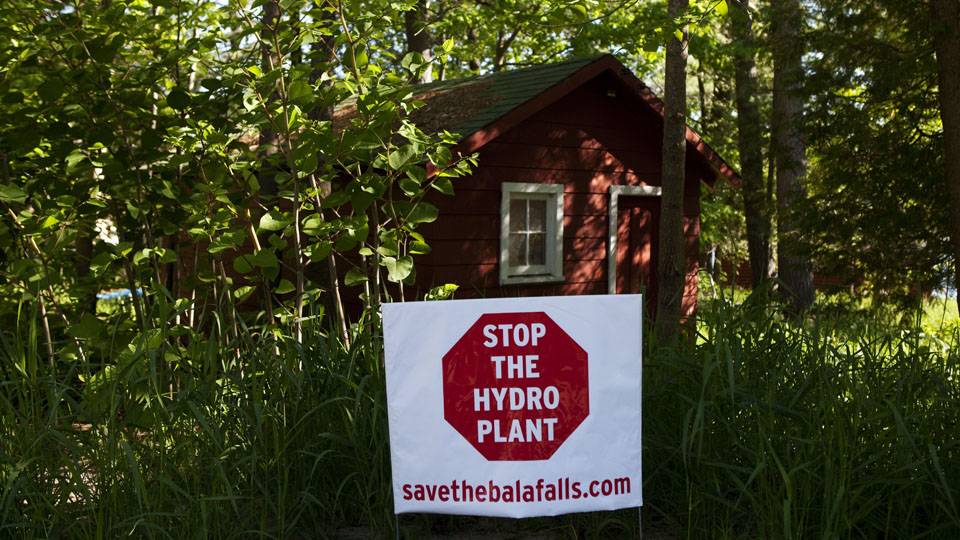 A sign opposing the construction of a controversial hydro-electric dam on the Bala Falls in the township of Bala in Muskoka Lakes is pictured on Saturday, June 7, 2014. (Matthew Sherwood / For The Globe and Mail)

Dammed if they do...

From his house by the Moon River, Mr. Turnbull has a clear view of the north falls. He’s a work-from-home accountant, a transplant from Scotland like Bala’s founder, Thomas Burgess. Mr. Turnbull first visited Bala in 1972, shortly after arriving in Canada. He moved here permanently in 1989 and says he’s watched canoeists and kayakers portage around the falls and dam hundreds of times.

One could canoe for days from Bala, west to Georgian Bay along the Moon River or east to Algonquin Provincial Park from Lake Muskoka. Water transport was a key to the community’s growth. Two dams were built in the late 1800s at the north and south falls to raise the water level on Lake Muskoka and aid navigation.

Hydroelectric power is a part of Bala’s history, too. A plant was constructed next to the north falls in the 1920s, feeding electricity to the region until 1954. The facility was demolished two decades later.

Now the province wants to harness that water power again.

The 4.5-megawatt power-plant proposal, awarded to Swift River Energy in 2005, went largely unnoticed until 2008, when planning kicked into high gear.

A grassroots opposition movement called Save the Bala Falls developed. Protest T-shirts were made and “Stop the hydro plant” signs sprouted everywhere. In Bala, the issue dominated the 2010 township election. (The township includes three wards.)

This wasn’t the only green-energy scrimmage in Ontario. The province was driving hard to expand water, solar and wind power as it shifted away from coal plants. The Liberal government was willing to pay big bucks for renewable power, and energy producers lined up to cash in.

If the hydroelectric project goes ahead, resident Sandy Currie worries it will harm the community’s businesses and spoil Bala’s main attraction.

Bala isn’t big. It has a few hundred residents, more in the summer when Ontarians flock to cottage country. Nearly all of its shops are huddled around a walkable stretch of Highway 169, about a two-hour drive north of Toronto.

“They’re going to rip the guts out of this little village,” Mr. Currie says as he sits on a bench near the falls.

“The whole idea of knocking down all those trees, disturbing all that soil. The ends don’t justify the means. We don’t need more electricity.”

“We’re committed to being good neighbours in this town,” Ms. McGhee says. “It’s a site with a rich history of water power and our project will allow the existing dams to be used to their full potential.”

Swift River is eager to start construction. After the township was granted leave to appeal the portage ruling in April, the company pressed the Appeal Court to expedite its hearing to early summer. Swift River still requires several approvals, including a land lease from the province, but it hopes to begin work on the project in September. 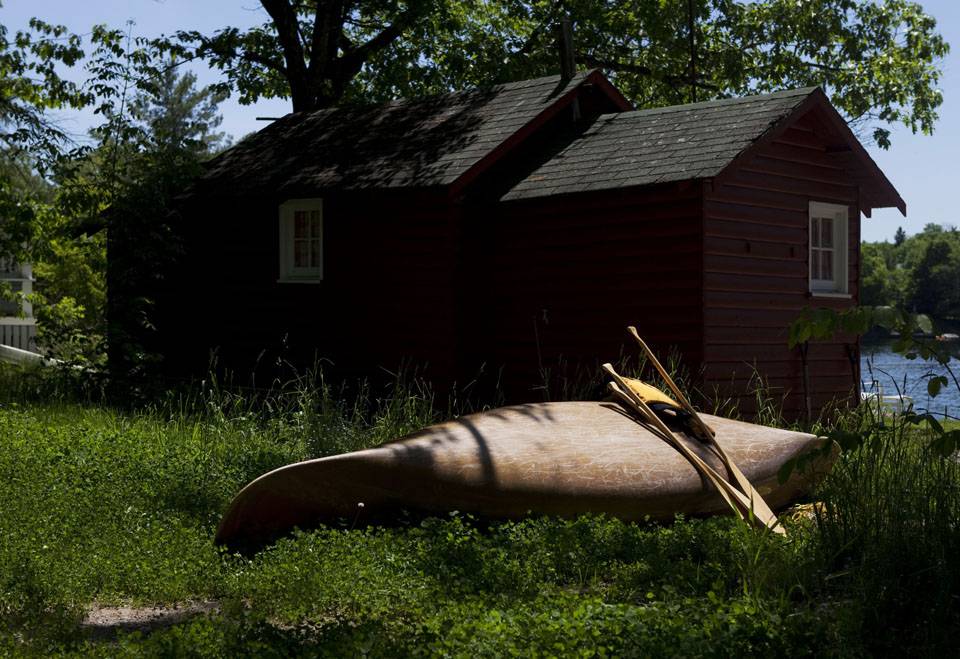 Alan Turnbull's canoe sits idle at his home in the township of Bala in Muskoka Lakes. (Matthew Sherwood for The Globe and Mail)

A ban on portaging?

The Bala Falls attract a steady stream of onlookers to Margaret Burgess Park. It’s a pretty little spot next to Bala United Church, where parishioners gather every Sunday at 11 a.m.

On the other side of the dam, a bright yellow portage sign beckons canoeists to the Moon River. The township erected the sign in September, 2012, irking the province. The portage ban came eight months later.

Four red signs warn the public that use of the property is prohibited under section 28 of the Public Lands Act. Even standing and looking at the falls from this patch is not allowed. (Several people have been warned, but no one has been fined.)

The Ministry of Natural Resources says the ban was issued because the province has safety concerns about people boating, portaging and swimming around the north dam. Two men drowned in 2009 when they dove in to save a child.

The province also says there are other portage options in the area – though they are longer.

The township maintains the prohibition wasn’t necessary and other measures have been identified to improve safety. The Divisional Court, however, did not find the province’s portage ban unreasonable. In a ruling last year, it concluded there was insufficient evidence to show the ban was a guise to advance the power project.

The Ontario government won’t discuss the township’s appeal because the case is before the court. In court documents, the township argues the historic use of the portage is well documented in written and oral histories of Bala, in journals of early explorers such as Thompson, and in postcards and photographs.

The township is pointing to the past because the Public Lands Act states that people have the right to portage if a route existed before the Crown sold or disposed of its land. The government counters that aspect of the legislation doesn’t apply here. The public, the province also says, has no legal right to use Ontario’s public lands. It only has a “privilege.” 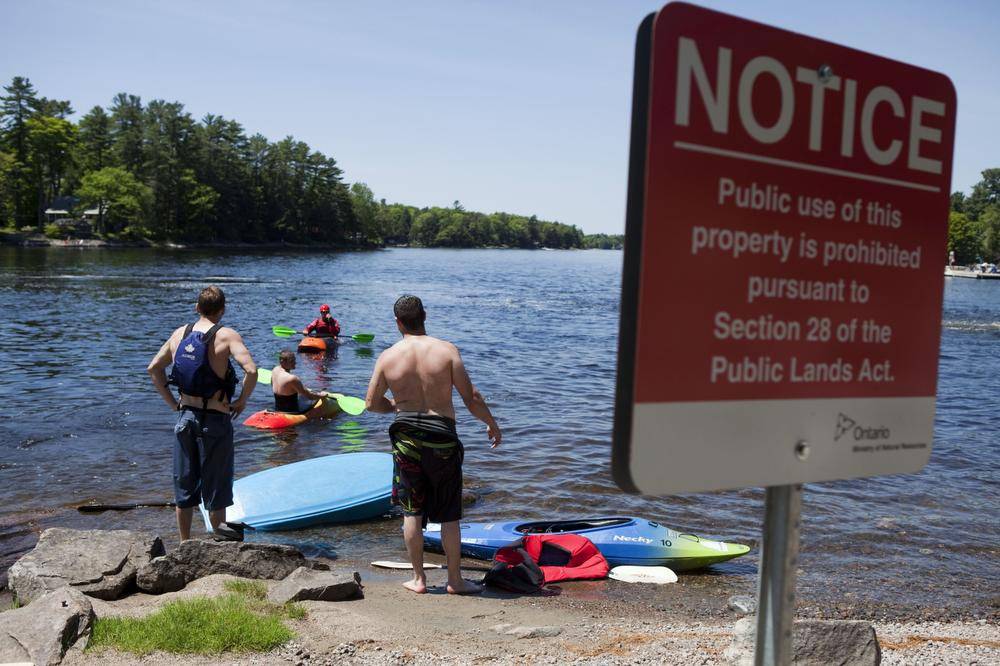 The ban is ignored, at times.(Matthew Sherwood for The Globe and Mail)

The Ontario courts have considered the portage issue at least once before, although the land in that case was not public. In 1989, the High Court of Justice ruled in favour of a canoeing association’s bid to paddle the Credit River through private farmland west of Toronto. But the judge found that the public right of navigation does not carry with it a public right of portage across another person’s property.

Thompson’s 1837 canoe trip through Bala could play an important role in the Appeal Court’s deliberations Monday.

It took a lot sleuthing to find Thompson’s handwritten notes. It was fairly common knowledge in Bala that the acclaimed surveyor had travelled through the region, but Mitchell Shnier says the province wanted proof.

A member of the Save the Bala Falls group, Mr. Shnier spent days poring over microfilm in the Archives of Ontario, searching through Thompson’s journals and deciphering his abbreviations and cursive notes. On page 13 of Journal 66, he found what he was looking for.

From Thompson’s notes, Mr. Shnier says it’s clear the surveyor was travelling upstream on the Moon River (then known as the Muskoka River) from Georgian Bay to Lake Muskoka on Aug. 13, 1837.

He arrived at the 12th falls (north Bala Falls) at 11 a.m. Thompson noted the “CP,” which stands for carrying place, or the portage, was 100 yards to his right, just south of the falls.

He hopes the Appeal Court sees it this way, too.