The storming of Canada's Parliament by a gunman is a nightmare scenario for the capital's security services, which have faced constant pressure to maintain public access even as they respond to heightened security threats.

With four separate police services bearing some responsibility for the parliamentary precinct, the attack poses new questions about communications among the forces, especially in light of a 2012 Auditor-General's report that cited flaws in the current system on Parliament Hill – a report whose key recommendations have not been acted upon.

The assault threatens to alter the balance between the need for greater security for those working in the parliamentary precinct and the national imperative of keeping the country's seat of democracy open to the public.

According to eyewitness accounts, a lone man carrying a long gun opened fire on a reservist standing ceremonial guard over the Tomb of the Unknown Soldier at the National War Memorial, then went in the direction of Parliament Hill, less than a block away. The gunman stormed into Centre Block and its central Hall of Honour, where he was shot dead.

Federal sources have identified the suspected shooter as Michael Zehaf-Bibeau, a man in his early 30s who was known to Canadian authorities.

MPs are crediting House of Commons Sergeant-at-Arms Kevin Vickers, a former RCMP officer, with heroism for shooting the assailant – though there has been no official confirmation of his role. But as the dust settles, hard questions will be asked of the RCMP and the other services that share responsibility for providing security on Parliament Hill.

Security forces will have to determine whether there was a communications failure after Ottawa police received a 911 call about the shooting, within earshot of Parliament Hill, but did not bar the doors to intruders. At issue is whether the patchwork nature of responsibility for security allowed a gunman to enter the building.

Former Liberal deputy prime minister John Manley, who led Ottawa's post-9/11 security review, questioned how a gunman could gain access to Centre Block after a shooting occurred so close to the precinct. He suggested there was a breakdown in communications, though he said it is impossible to draw conclusions in the fog of the day's events.

"In order to assess whether there was a failure of the security or whether it was inadequate, we need to know more about what happened," Mr. Manley said. "But if this is linked to religious extremism, we've significantly changed the security game in Canada."

But the government and security forces will have to weigh demands for more security against the need to maintain public access to Parliament.

In a recent academic paper on Parliament Hill security, Mr. Vickers himself speaks of the need to keep the precinct open to Canadians. "I think it's fundamental to our democracy that citizens have access to their place, their building," he said in an interview for a postdoctoral analysis completed this spring by Memorial University's Anne Dance.

Public access to Parliament has been tightened over the past 20 years. Long gone are the days when visitors could wander into buildings without undergoing a security screening. Some changes were imposed after a man commandeered a bus and drove it onto Parliament Hill in 1989, an episode that ended peacefully after an eight-hour standoff. More restrictions were imposed after the 9/11 attacks.

Ms. Dance noted that past security breaches on Parliament Hill have typically led to calls for greater security, including "American-style" barriers to entry. And she expects such demands will be made in the light of Wednesday's attack.

"Whatever we get, I hope it will be a 'Canadian style' that continues to prioritize public access alongside security," she said.

Currently, four different forces hold some responsibility: The RCMP's Parliament Hill detachment is responsible for safety on the grounds; the House of Commons Security Services protects buildings under the jurisdiction of the House; the Senate Protective Service covers the east portion of Centre Block and East Block; and the Ottawa Police Service is responsible for the streets surrounding the precinct.

In a 2012 report, Canada's Auditor-General Michael Ferguson called for a unified security force to protect the parliamentary precinct. "A next step could be to unify the security forces for Parliament Hill under a single point of command, making it possible to respond to situations more efficiently and effectively," it said. That step was never taken.

The report raised concerns about security at the parliamentary precinct:

The report also praised aspects of security preparation at the precinct: 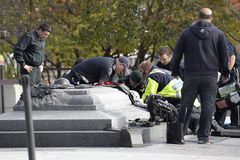 Follow Shawn McCarthy and Kelly Grant on Twitter @smccarthy55 @kellygrant1
Report an error Editorial code of conduct
Due to technical reasons, we have temporarily removed commenting from our articles. We hope to have this fixed soon. Thank you for your patience. If you are looking to give feedback on our new site, please send it along to feedback@globeandmail.com. If you want to write a letter to the editor, please forward to letters@globeandmail.com.
Comments are closed