The Duke and Duchess of Cambridge ended their Canadian tour on Saturday in Victoria's inner harbour, greeted by delighted cheers as three-year-old Prince George peered out at the crowd and waved with both hands. Another surge of cheers followed when his 16-month-old sister, Princess Charlotte, at her mother's side, smiled and gave a wave before the family climbed aboard a seaplane and began their journey home.

For eight days, the royal couple travelled across British Columbia and Yukon, paddling a Haida war canoe, sailing a wooden-hulled schooner, riding a vintage steam train and travelling aboard a Coast Guard hovercraft.

As promised by Governor General David Johnston when they first arrived, it was "a uniquely Canadian variation of planes, trains and automobiles."

They were snubbed by one prominent B.C. indigenous leader who refused an invitation to take part in an event, but received warm welcomes in First Nations communities on the coast and in the North.

Prince William took part in a symbolic reconciliation ceremony and he was repeatedly urged to take up the cause of helping repair the relationship between the Crown and Canada's indigenous people.

At an intimate meeting at Government House in Victoria, Edward John, Grand Chief of the First Nations Summit, noted that he was one of thousands of children forced into residential schools by the Canadian authorities who sought to "kill the Indian in the child."

He asked William to play a part in delivering "true and effective reconciliation to deal with the issue of cultural genocide."

During their visit to Haida Gwaii, the royal couple was drawn into a political battle as they pulled together with paddlers who were wearing t-shirts protesting the development of liquefied natural gas. B.C. Premier Christy Clark, the province's leading advocate for LNG, was conspicuously absent from William and Catherine's side. Haida Council President Peter Lantin said the premier was not invited, nor was she welcome.

Inside a longhouse in Skidegate, William acknowledged the long-standing ties between the Royal Family and the indigenous people of Canada. "The historic link between the Crown and the First Nations people is strong, and something that I hold dear to my heart," he said.

In Kelowna, William sipped a British Columbia-made single malt whisky – his declaration of approval was instantly turned into a marketing campaign for the distillery. The couple also braved a sample of geoduck at a culinary event, which the British media delighted in describing as an "unmistakably phallic" giant clam.

Along the way, thousands of Canadians turned out – in weather fair and foul – to glimpse and cheer the royals. The couple used their star power to draw attention to issues such as mental health and addictions, and they celebrated the protection of the Great Bear Rainforest. They met with athletes, chefs, mountain bikers and some of Canada's newest citizens, Syrian refugees.

The family departed the Victoria harbour on Saturday with some signature gifts, including Premier Clark's present of matching Vancouver Canucks hockey jerseys customized for each of the children.

George and Charlotte were kept mostly out of the public eye, but attended a children's party with military families, where they played with balloons and farm animals.

In a statement on Saturday, William thanked Canadians for their warmth and hospitality. "We feel very lucky to have been able to introduce George and Charlotte to Canada. This country will play a big part in the lives of our children and we have created such happy memories for our family during this visit," he said. "Canada is a country of optimism, generosity and unrivalled natural beauty. I hope we have helped all Canadians celebrate what makes this country great."

William and Kate get education in sustainability in trip to Haida Gwaii
September 30, 2016 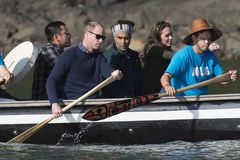 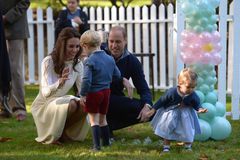 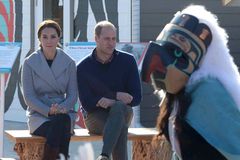