More than three years after the crash of a military helicopter forced a halt to one of Canada's final combat missions in Afghanistan, investigators say they are nearing the end of their probe into what went wrong but still can't say when they will reveal the results.

A report on the crash of the Chinook in May 2011 remains conspicuous by its absence given that information is readily available on 20 more recent incidents involving Royal Canadian Air Force aircraft. About half of those investigations are complete.

The lack of any word on the Chinook incident has not gone unnoticed by some who were aboard.

"It will be very helpful for understanding what happened," one soldier said.

"I still question myself about it."

The soldier, one of about two dozen Canadian Forces personnel on the flight to a remote area of Panjwaii district in southern Kandahar province, requested anonymity given his position in the military.

The chief investigator for the Department of National Defence flight safety directorate said this past week the investigation was "ongoing" but "near the end," although he could not say when it would conclude.

A draft report had been sent to "persons with direct interest" to comment on the accuracy and completeness of the investigation, Lt.-Col. Martin Leblanc said in an email.

"After which, we'll be working the final copy of the investigation report considering all the...comments we'll have received," Leblanc said.

The incident occurred as the pilot attempted to land the packed helicopter by moonlight in a dusty area. The chopper — one of two ferrying troops to the mission — hit the ground hard, made a "horrifying" sound as it rolled onto its side, and pitched soldiers and equipment around the interior.

Some soldiers and a reporter were initially trapped as the smell of fuel filled the cabin, but there was no fire and everyone was able to get out safely.

The Chinook, which cost about $45 million, was essentially destroyed.

An unpublicized occurrence report obtained by The Canadian Press last year said there were no injuries. However, one man's piercing screams filled the air the night of the crash, and a few soldiers were flown to a military hospital in Germany, a Canadian Forces spokeswoman told the news agency.

"I still treat my wounds of that day, which will remain etched in my memory," the soldier said.

"I have some friends who will never come back to work."

Enemy activity was immediately ruled out and those involved said haze and darkness played a role.

Rotor-driven dust "brownouts" in Afghanistan pose a serious hazard for chopper pilots. In July 2009, for example, a Canadian Forces Griffon leaving a forward operating base whipped up blinding dust, clipped a wall, flipped, and burst into flames. Three soldiers were killed.

Last year, the directorate's then-chief investigator said a lack of resources was hampering a speedy probe of the Chinook crash.

"The investigation is taking some time and that is due to overall investigation capacity limitations," said Paul Dittman, who was a lieutenant-colonel.

"I prioritize my team's efforts based on severity and relevance."

Dittman, now a colonel with other duties, said many relevant CH147 fleet issues had been addressed by "other non-investigation processes," thereby relieving some pressure to complete the probe.

He noted the directorate had numerous on-going investigations — it handles about 3,200 a year, most minor — and promised to finalize this one as soon as possible.

The Canadian Press, whose reporter was slightly hurt on the ill-fated flight, filed a request last year under access to information laws for crash information. In response, National Defence released a 17-page document — with 16 pages blanked out.

The news agency withdrew an appeal of the redactions after an investigator with the Office of the Information Commissioner said he had been assured the report would be published by the end of May. 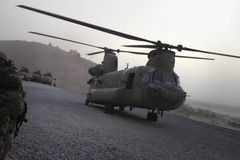 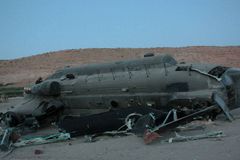