Long-standing protests over the Muskrat Falls hydro project are escalating — including nine arrests Monday, a march on the provincial legislature and a hunger strike — as reservoir flooding in Labrador is set to start.

"You can't do this to people. This is still Canada," said Denise Cole of Goose Bay. She helped organize a peaceful protest followed by a sit-in that temporarily limited public access to the legislature in St. John's.

At issue are concerns raised by Harvard University researchers that the flooding as part of dam and powerhouse construction may contaminate fish and other wild foods with methylmercury.

The resulting reservoir will cover an area of about 41 square kilometres near Happy Valley-Goose Bay. It will also be upstream from 2,000 Inuit in the Lake Melville region who rely on fish and seal meat.

"Those are my people that are getting arrested and it's the downstream population ... whose health is being threatened," said Cole. The demonstrators left the legislature voluntarily after about five hours, saying their requests to meet with government officials were ignored.

Researchers have suggested clear-cutting the land and removing top soil could limit the risks of methylmercury. The neurotoxin is created as mercury blends with bacteria and is linked to heart issues, intellectual problems in children and other effects.

The province has so far balked at full clearance. Crown corporation Nalcor Energy says it's monitoring mercury levels but has said its projections indicate contamination in Lake Melville will be diluted to "no measurable effects."

Water levels are expected to gradually rise this fall by about one metre per day to 25 metres, he said. After that, levels will go up to 39 metres by 2019.

"Nalcor has subsequently undertaken additional water quality monitoring and we are working with both governments on this program."

Environment Minister Perry Trimper said in a statement Monday Nalcor has obligations to supply energy to Nova Scotia and complete the project under terms of a federal loan guarantee.

"Nalcor Energy has $7 billion in contractual and legal commitments," he said.

Still, Trimper said the Nunatsiavut Government, Innu Nation and the NunatuKavut Community Council representing Inuit-Metis in southern Labrador will be part of an independent advisory committee. It will discuss "further clearing of the reservoir between the 25 to 39 metre mark."

Nunatsiavut president Johannes Lampe isn't waiting. He wrote Monday to Prime Minister Justin Trudeau and the premier calling for a halt to any flooding.

He said Harvard University research funded in part by the independent National Science Foundation in the U.S. with support from his government "is not being used to inform the monitoring program."

"This is extremely disappointing and has added to the level of frustration" with the province, he said in a statement.

"We continue to be shocked at the intransigence of the provincial government and Nalcor to not do the right thing."

"The Liberal government has said that they have to deal with the mess that was left behind. They, too, will not listen to scientific evidence."

Angus Andersen from the Inuit community of Nain in northern Labrador stood before the legislature early Monday near a woman holding a baby and a sign: "Please don't poison me."

"It's wrong from the start, and it's wrong now," he said of Muskrat Falls, a troubled project that with financing has soared to an estimated $11.4 billion from $7.4 billion four years ago. First power is now delayed until 2019.

Nine people protesting at the construction site in Labrador were arrested early Monday after Nalcor got an injunction Sunday forbidding obstruction of its main entrance.

RCMP said they each face one count of disobeying a court order.

Their arrests came on Day 4 of a hunger strike by Inuk artist Billy Gauthier of North West River near Happy Valley-Goose Bay. He posted a video to his Facebook page Thursday night of what he said will be his last meal until Nalcor agrees to fully clear the reservoir area.

He ate wild salmon from Rigolet.

"I feel as though in a way this is an attack not just on me, not just on my family, but also on my culture which is Inuit," he says in the video that has been viewed almost 35,000 times.

"It's also an attack on every Labradorian who actually respects the land." 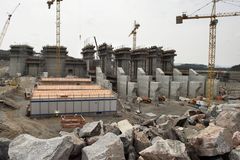