A proposed legal settlement involving the drug company whose pill triggered Canada's deadly opioid epidemic shuts the door on the provinces taking action to recoup the costs of treating people dependent on painkillers.

Purdue Pharma, maker of the prescription painkiller OxyContin, has agreed to pay $20-million, including $2-million to provincial health insurers, to settle the long-standing class-action suit. An Ontario court judge approved the proposed national settlement two weeks ago. Courts in three other provinces, including Nova Scotia on Tuesday, must also approve the settlement before it becomes final.

All 10 provinces consented to their share of the proceeds, precluding them from taking action against the company to recover additional costs, legal experts say. The settlement says class members and provincial health insurers are barred from "initiating, asserting or prosecuting any claim, action, litigation, investigation or other proceeding in any court of law … or any other forum."

The amount earmarked for the provinces reimburses only a fraction of their health-care costs. The provinces' public drug plans spent $423.3-million over a five-year period on medications used for addiction to prescription painkillers and illicit opioids, according to figures obtained from the Canadian Institute for Health Information and the Quebec government. Between 2011 and 2015, spending more than doubled, the figures show.

"If I was a provincial leader, there's no way I would sign a document like that," said Kieran Michael Moore, medical officer of health for Kingston and neighbouring communities and program director of public health and preventive medicine at Queen's University. "The $20-million doesn't touch the cost, both at a health-care system level and at a social level, that our society has had to endure as a result of the prescribing of this drug."

Even if the provinces had walked away from the table, they would have had to introduce legislation to give them the power to sue Purdue, similar to what they did with Big Tobacco several years ago. But unlike the United States, which has responded to its own addiction crisis with a wave of litigation against pharmaceutical companies, Canada has no tradition of suing the industry.

"We need to perhaps modernize the legislative framework to allow provincial governments to take direct action against drug companies to recover sizeable losses that may occur from time to time," said Joel Rochon, one of the class-action lawyers.

Provincial health insurers participated in the settlement through legislation that allows them to recover health-care costs for personal-injury accidents such as slips and falls, medical malpractice or manufacturing defects. The class-action lawyers were required by law to include a claim on their behalf, but the provinces were not obligated to agree with the settlement, legal experts said.

The proposed settlement caps a legal battle that began a decade ago between Stamford, Conn.-based Purdue and lawyers representing as many as 1,500 Canadians who got hooked on OxyContin after their doctors prescribed the drug. The class action accuses Purdue of knowing that anyone who took the painkiller would be at risk of becoming addicted to it and suffer withdrawal symptoms if they stopped. At no time were these risks disclosed.

A Purdue spokeswoman said the settlement is not an admission of liability by the company but declined to comment on the provinces, saying the matter remains before the courts. With the exception of Ontario, provincial officials also declined to comment, but legal experts said their only recourse for recovering costs is the federal government.

Ontario Health Minister Eric Hoskins has asked Ottawa to prosecute the company under the federal Food and Drugs Act. In a statement provided to The Globe, Dr. Hoskins said Ontario relied on class counsel, who recommended accepting the settlement as the "best possible outcome" for losses endured by families. "However," he said, "our government believes strongly that still more needs to be done."

Dr. Hoskins has the support of at least one of his provincial colleagues. Newfoundland and Labrador Health Minister John Haggie said in an e-mail to The Globe that he would support a provincial-territorial call for the federal government to investigate Purdue. "Such legislation protects the health and well-being of Canadians," Dr. Haggie said. "If there is a suggestion that these rules have not been followed and respected, there should be an investigation."

A spokesman for federal Health Minister Jane Philpott said she will continue to explore options with her provincial and territorial counterparts to address the opioid crisis.

Unlike the United States, where pharmaceutical companies have paid $35.7-billion (U.S.) in settlements with federal and state governments over a 25-year period, according to national non-profit organization Public Citizen, Health Canada has regarded pharmaceutical companies as partners. Bureaucrats have adopted a more co-operative, informal approach to enforcing the rules rather than resorting to the courts, medical experts say.

A Health Canada spokeswoman confirmed that the department has not referred any matter involving alleged illegal pharmaceutical advertising to the Public Prosecution Service of Canada, which prosecutes criminal offences under various federal statutes, since at least fiscal 2003-04. The Globe would have to file an access-to-information request to find out about any cases prior to 2003-04, the spokeswoman said.

Matthew Herder, director of Dalhousie University's Health Law Institute and an associate professor in the faculties of law and medicine, said OxyContin is a clear example that warranted a formal response by Canadian authorities. Canada's opioid epidemic traces its roots to the introduction of the painkiller 21 years ago. The fact that Purdue has never faced any consequences in this country, he said, "raises to me deep questions about who Health Canada is really acting in the best interests of."

The absence of government action in Canada stands in stark contrast to the United States, where Purdue and three of its executives paid $634.5-million in 2007 to settle criminal and civil charges against them for misbranding OxyContin as less addictive than other pain medications. Since then, several states and American municipalities have sued Purdue for deceptive marketing. Purdue paid $24-million in December 2015, to settle a lawsuit with Kentucky.

Joel Lexchin, a Toronto emergency-room doctor and professor emeritus at York University's faculty of health, said he cannot recall any instance over the past four decades where a pharmaceutical company has been prosecuted in Canada for misleading marketing. Despite evidence to the contrary, he said, the federal government does not seem to believe that the illegal marketing that takes place in the United States also goes on in Canada. "We just seem to think that things stop at the border."

Nav Persaud, a family doctor and assistant professor in the department of medicine at the University of Toronto, is calling on the federal government to create a compensation program that would award $15,000 (Canadian) each to victims of the opioid crisis. In a letter to Prime Minister Justin Trudeau and Dr. Philpott, Dr. Persaud said the federal government is partly to blame for the "outrageously small" class-action settlement because it failed to take action.

Purdue amassed revenue of $31-billion (U.S.) from OxyContin. Dr. Persaud said Ottawa should recover the cost of the compensation program by treating opioid companies like Big Tobacco. In 1999, the Ontario government launched a $50-billion (Canadian) lawsuit against tobacco companies, joining British Columbia and New Brunswick in what became a national battle to recover health costs linked to smoking.

Camille Cameron, dean of law at Dalhousie University, noted that the lawsuits against Big Tobacco have dragged on for 16 years in Canada without a settlement. But both the tobacco and pharmaceutical industries have deep pockets, she said. "The parallels are stunning." 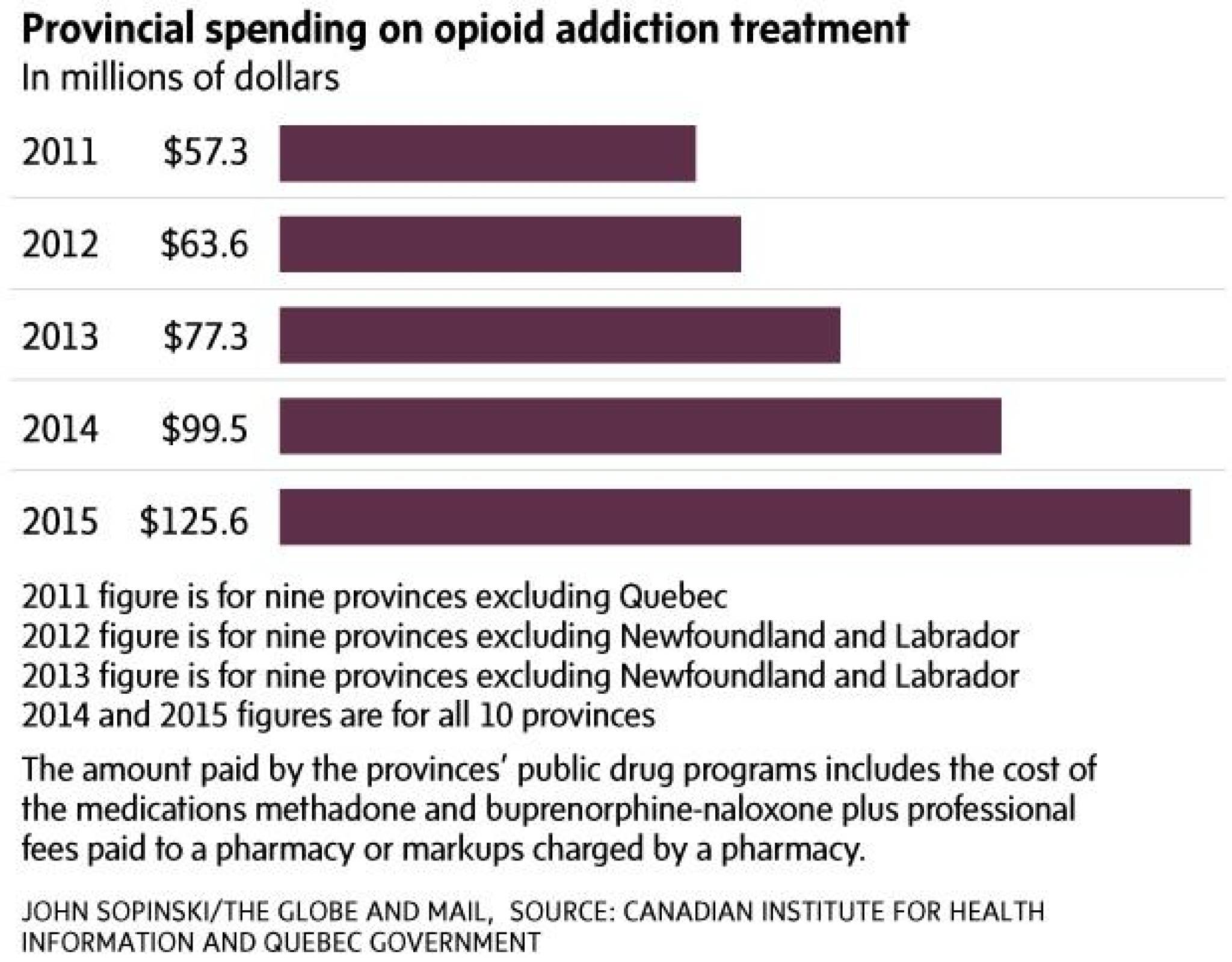