Sandra Pupatello, a former member of Premier Dalton McGuinty's cabinet, will officially jump into the race to lead the Liberal Party and become the next premier of Ontario on Thursday.

Ms. Pupatello, whose name has been mentioned frequently as a possible successor to Mr. McGuinty, plans to hold a news conference at Ryerson University in Toronto, Jim Maclean, one of her advisers, confirmed to The Globe and Mail.

She joins two other members of Mr. McGuinty's cabinet – Kathleen Wynne and Glen Murray. A third member, Citizenship and Immigration Minister Charles Sousa, is set to launch his bid on Saturday.

Several other senior cabinet ministers have already bowed out. After playing coy on her leadership aspirations, Health Minister Deb Matthews announced on Wednesday that she was best suited to her current job.

Ms. Matthews endured months of scandal over the air ambulance service Ornge but is still considered a cabinet heavyweight.

"I have decided not to seek the leadership of the Ontario Liberal Party," she told Health Achieve, a conference of health-care leaders in Toronto. "After much thought, I've decided that the biggest contribution I can make is to stay right where I am."

With Ms. Matthews, Finance Minister Dwight Duncan and Energy Minister Chris Bentley out, Ms. Pupatello and Ms. Wynne are emerging as the front-runners.

Ms. Pupatello, 50, has the support of Mr. Duncan – the two Windsor natives are long-time friends. She plans to make the economy central to her campaign. With the minority Liberal government facing the possibility of defeat soon, she said in an earlier interview, the focus needs to be returned to the province's financial situation.

Ms. Wynne, 59, is pledging to repair the governing Liberals' tattered relations with teachers and scrap plans to impose wage freezes on public-sector workers. She said at her campaign launch on Monday that she would try to reach more negotiated settlements with public-sector workers if she becomes premier, making the need for legislation "moot." A legislated wage freeze is in place for teachers.

Ms. Pupatello spent 16 years in government as the MPP for Windsor West and was a member of Mr. McGuinty's cabinet from the time the Liberals took office in 2003.

She did not seek re-election in 2011, and has been director of business and global markets at PricewaterhouseCoopers during the past year, a particularly tumultuous time for the Liberals. This allows her to distance herself from the government's fight with doctors and teachers and scandals over the province's air ambulance service and two cancelled gas plants.

With Mr. Duncan out of the running, a high-profile group of backroom Liberals has lined up behind his fellow Windsorite, Ms. Pupatello.

Mr. Maclean is a former director of communications for Mr. McGuinty.

Ms. Pupatello is expected to run as a relatively centre-right candidate against her more left-leaning contender, Ms. Wynne. Ms. Matthews is also perceived to be on the left of the political spectrum.

Mr. Matthews told reporters after her speech that she intended to stand again for election, but wouldn't tip her hand which leadership candidate she might support.

She insisted that the negative press around Ornge played no role in her decision to skip the race and that the scandal was "not a factor" among those she consulted about a possible run.

"I fixed the problems at Ornge," she said. "There were serious problems at Ornge and I fixed them in a very decisive way. Completely new leadership, new focus at Ornge. So, if anything, it demonstrated that I could turn around an organization like Ornge when it needed turning around."

The Liberal Party will choose a new leader on the weekend of Jan. 25 to replace Mr. McGuinty, who is resigning after nine years in office.

updated
The race is on, with Glen Murray the first to vie for Ontario Liberal leadership 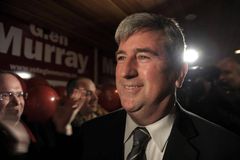 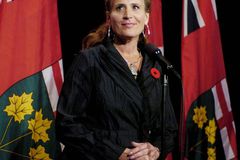 Follow Karen Howlett and Oliver Moore on Twitter @kahowlett @moore_oliver
Report an error Editorial code of conduct
Due to technical reasons, we have temporarily removed commenting from our articles. We hope to have this fixed soon. Thank you for your patience. If you are looking to give feedback on our new site, please send it along to feedback@globeandmail.com. If you want to write a letter to the editor, please forward to letters@globeandmail.com.
Comments