The country's top Roman Catholic cleric is taking on an influential new role at the Vatican, prompting speculation he could ultimately become the first Canadian-born pope.

Outspoken Cardinal Marc Ouellet, primate of the Roman Catholic Church in Canada, has been appointed prefect of the Congregation for Bishops, a position that will allow him to wield considerable influence over the nomination of bishops worldwide.

The congregation is one of nine at the Vatican, bodies that are akin to government ministries. As prefect, Cardinal Ouellet will occupy one of the most senior posts to be held by a Canadian in the world's largest Christian denomination.

"You can think of the Vatican as a government; he's been named to the cabinet," said Alain Bouchard, a lecturer at Université Laval's theology school in Quebec City and an expert on Catholicism. "In fact, the job is much like the whip of a political party."

Cardinal Ouellet, 66, is a close ideological and doctrinal ally of Pope Benedict XVI, and has been a tireless promoter of Rome's position on abortion, gay marriage and religious education, drawing flak from liberal-minded elements of the church and interest groups alike.

"At minimum, Cardinal Ouellet has succeeded in restoring the Catholic Church's place in Quebec's public discourse," Mr. Bouchard said. "I'm inclined to think it's a mandate he gave himself. He doesn't seem to mind if you speak ill of him or well of him, just as long as you speak of him."

The body Cardinal Ouellet is to preside over makes recommendations to the Pope on which priests should be elevated to the rank of bishop. Although the initial lists are drafted at the individual diocese level, the Congregation for Bishops ultimately delivers the names of its preferred candidates to the pontiff, who makes the appointments.

Cardinal Ouellet will therefore have an indirect influence on the ranks of cardinals, who are selected from bishops, and vote in papal elections.

"This could even put him in line for an eventual papacy if he's able to establish himself as a strong voice," said Jean-Guy Vaillancourt, a sociology professor at Université de Montreal and long-time church-watcher.

Cardinal Ouellet, a native of La Motte, Que., speaks five languages and was ordained in 1968 after completing a theology degree at the Université de Montreal.

He held a number of posts in Quebec, South America and in Rome before being named Archbishop of Quebec City in 2002 (he was named a Cardinal the next year by Pope John Paul II).

He has been mooted for a promotion for several weeks, but told a news conference in Quebec City that he was surprised when the call came and accepted the offer "with gratitude but also with a sense of fear because of this responsibility."

Quebec's other Cardinal, Jean-Claude Turcotte of Montreal, held up the nomination as evidence that Canada is in the ascendancy within the church.

"I think it will help our country to have someone over there who is among the Holy Father's 10 closest collaborators, who knows Quebec and who will be able to bring a better understanding of the problems we face here," Cardinal Turcotte said.

Some scholars, however, doubt the promotion will do much to advance the place of Canada's Catholic community in a church increasingly dominated by Latin America and Africa.

Indeed, the appointment comes at a trying time for the church both globally - it remains beset by child-abuse scandals - and in Cardinal Ouellet's home province. The influence of the Catholic clergy has waned sharply since the Quiet Revolution of the 1960s, and a financial crunch has forced the sale of dozens of churches.

Detractors also observe that Cardinal Ouellet hasn't enjoyed much success in boosting attendance or attracting benefactors. And if his strict adherence to church teachings on social issues - including his flinty, headline-generating rhetoric on abortion - has stood him in good stead with the Vatican, it has infuriated critics.

Experts agree the elevation of Cardinal Ouellet appears to be part of a broader reorganization by Pope Benedict to give a more conservative bent to the Roman Curia.

"I wouldn't bet against him as a candidate for pope if he plays his cards right," said Mr. Bouchard, noting the broad trend in world religions is to appoint leaders with administrative track records, like Pope Benedict.

Statement from Catholic cardinal about abortion and rape causes uproar
May 18, 2010 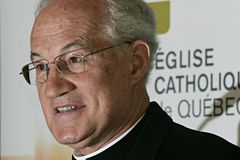 Opinion
A distinctly Quebec view on abortion
May 31, 2010

Senior Quebec cardinal unleashes scathing criticism of province's society
October 14, 2008
Follow Sean Gordon on Twitter @MrSeanGordon
Report an error Editorial code of conduct
Due to technical reasons, we have temporarily removed commenting from our articles. We hope to have this fixed soon. Thank you for your patience. If you are looking to give feedback on our new site, please send it along to feedback@globeandmail.com. If you want to write a letter to the editor, please forward to letters@globeandmail.com.
Comments