Quebec is again trying to limit the place of religion in the province, but this time the governing Liberals have thrown into the mix a crackdown on fundamentalism, terrorist recruitment and hate speech.

The government presented legislation Wednesday in the National Assembly amid calls for calm from the four political parties in the house. But even the simultaneous introduction of two bills with divergent goals – one to promote secularism, the other to fight terror, both clearly aimed at Muslims – reopened divisions.

One bill – the Liberal version of the Parti Québécois Charter of Values so hotly contested two years ago – promises to guarantee gender-equality rights in the face of religious requests. Coming after a decade of debate over these issues, the bill contains a requirement that government services be offered and used with faces uncovered – a measure designed to limit the use of all-covering veils by some Muslim women.

The other bill and accompanying action plan cracks down on Islamist extremism with dozens of small measures empowering courts, police, teachers and social workers to intervene when they suspect radicals pose a risk. That proposed law was a swift response to last fall's attacks on Parliament Hill and Saint-Jean-sur-Richelieu by homegrown terrorists from Quebec, and the rapid rise of youth recruitment by terrorist organizations in the province this year.

Omar Koné, a Sufi imam who is among the liberal leaders in Montreal Muslim communities, welcomed the measures but lamented that a secularist bill was paired with an anti-terror bill.

"A lot was brought today," he said. "There is an issue of radicalization. There is the state trying to establish some rules. They are separate issues, but people will make an amalgam … It would have been better to choose different moments to announce these two measures."

Salam Elmenyawi, the head of the Muslim Council of Montreal, said the entire package stinks of "discrimination and prejudice."

"We are totally disappointed. There was no consultation, as we were promised. We thought the Liberals would do things differently than the government before," he said. "We're almost at the point where we need to say, 'Make whatever laws you want but please stop talking about it.' Every one of these debates makes life miserable for Muslims in Quebec."

Bill 59 – the anti-extremist law – gives the Quebec human-rights commission expanded powers and resources to investigate hate speech against the wide range of people who face discrimination.

A public registry will expose people found to be spreading hatred, and the Education Ministry could cut funding or operating licences for any institution financing or harbouring them.

Courts will have to establish consent for any marriage involving 16- or 17-year-olds. Notices for youth marriage will be published, allowing a relative or acquaintance to raise concerns about forced marriages.

Additionally, in a measure intended to counter so-called honour crimes, social workers will be authorized to seek civil protection court orders if the health and safety of any person is in danger.

The overall package cost $10-million over three years, including money to boost Montreal's fledgling anti-radicalization centre and enhanced training and research. A Sûreté du Québec unit will be set up to monitor social media for terrorist recruitment and hate speech. Research teams will examine hotspots such as Collège de Maisonneuve – a CEGEP where a dozen young jihadi recruits studied.

Mr. Koné welcomed the details. "It's a good start," he said. "I don't think the Muslim community is unfairly targeted. We can't in the name of global fairness ignore that we have an issue. Fifteen kids that were trying to leave the country [to join jihad in the Middle East] were not from a different faith.

Bill 62 – the Liberal version of the PQ's Charter of Values – puts a framework on religious accommodation in addition to the face-covering ban. Muslim garments such as the niqab and burka "must be refused if the refusal is warranted in the context for security or identification reasons or because of the level of communication required," the bill says.

The Liberals won the election in 2014 promising the crackdown. Facing their own election in the fall, Conservatives in Ottawa quickly endorsed Quebec's ban on covered faces. Tim Uppal, the minister of state for multiculturalism, said Ottawa "will be moving forward in coming days with respect to the face coverings at citizenship ceremonies, and we will consider what other measures may be necessary."

Experts are split on the likely outcome if the Quebec law is challenged, but Hugo Cyr, the dean of political science and law at the University of Quebec at Montreal, said in an e-mail that "the bill struck the right balance between the need for state neutrality on religion and the freedom of conscience and religion of citizens and public servants … All in all, the bill will probably not satisfy the most radical secularists, but it affirms clearly the need for the state to be religiously neutral."

The Liberals first introduced a secularism law in 2009 but it died on the order paper. The Parti Québécois government introduced a version that would have banned public servants from wearing more religious symbols, such as the hijab, kippa and other "conspicuous" displays of religion that do not cover the face. That plan triggered considerable acrimony and died after the minority PQ government lost the 2014 election.

The plan announced Wednesday comes early in a Liberal majority mandate, meaning it is likely to become law by the end of the year.

With a file from Sean Fine 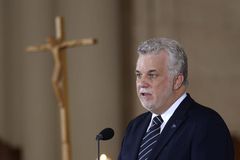 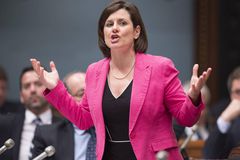 Police raid Montreal homes after radicalization arrests at airport
May 26, 2015 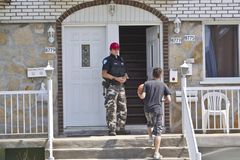