Quebec is softening some aspects of its new law forcing people to show their faces to obtain public services, while maintaining rules that would require women to remove their religious face veils when taking a class or picking up their child at daycare.

Justice Minister Stéphanie Vallée sought to quell the outcry since the adoption last week of Bill 62, which requires people not to wear face coverings when giving or getting public services. It has been called discriminatory legislation that targets the tiny minority of Muslim-Canadian women who wear the niqab or burqa.

Ms. Vallée, who gave confusing interpretations of the law last week, provided details on its application on Tuesday that suggest its scope may be more limited than it originally appeared.

Why Quebec is ground zero in the battle over secularism

The requirement for unveiling would be restricted to the point of interaction with a public servant. A woman can apply for an exemption on the basis of her religion; and the law contains no fines or sanctions, leaving open the question of what sort of penalties non-compliance would bring.

Ms. Vallée insisted the law is "not repressive."

"No one will be thrown off public transit, be refused emergency health care, or be chased out of a library," she said.

"We do not have the intention of setting up an uncovered-face police."

Quebec's effort to establish state secularism is popular in the province. Still, the guidelines made public on Tuesday expose the challenges of governing day-to-day human interactions in a diverse society and are unlikely to dispel concerns about how the rules will be applied.

In examples given by Ms. Vallée, a woman will have to show her face to a bus driver if she has a transit pass with a photo ID, something necessary for student discounts.

But she could wear her veil when she was travelling in the bus. This is a toned-down interpretation of the law offered last week, when the minister said a person would have to unveil for the duration of the ride.

Meanwhile, McGill University in Montreal has advised faculty, staff and students to continue with their functions and activities the way they always have. A spokesman said the university has an obligation to accommodate religious differences and will continue to do so.

"Based on the information we currently have, Bill 62 will not affect our existing policies and practices," McGill principal Suzanne Fortier said in a statement.

"Inclusion is a fundamental value of the McGill community. As a public university in Quebec, McGill supports the broadest possible access to higher education and to employment at our institution."

The Liberal government continued to defend its decision to push ahead with the legislation, which has been met with a barrage of criticism, both within Quebec and from political leaders outside the province.

Premier Philippe Couillard, whose government is perceived by francophone Quebeckers as weaker than its rivals on issues of identity, defended the law in the National Assembly. "We must have complete human communication, especially when it is complex," Mr. Couillard said. "And that requires doing it with an uncovered face in the framework of public services."

While the law might provide the government with some political cover ahead of next year's general election, there is little chance it will inoculate the Liberals against opposition attacks. The Leader of the Parti Québécois, Jean-François Lisée, whose party wants to go further on limiting religious garb in the public sphere, portrayed even the minor concessions made by Ms. Vallée as evidence that the Liberals had bowed to pressure from English Canada.

"Tomorrow, the federal Parliament, Ontario parliament, team Coderre will say: 'Oh, we got them, we got them, the Québécois,'" Mr. Lisée said on Tuesday. "We scared them. They caved in."

Ms. Vallée said anyone familiar with Quebec's protracted debate over religious accommodations for the past decade would understand that legislators needed to act.

She portrayed Quebec's law on state religious neutrality as trail-blazing, showing that the province was perhaps ahead of the curve in dealing with issues of accommodations and religious minorities.

"I can understand that colleagues from other provinces have not been as into the discussion as we [have]. But it's our right to legislate with regards to social issues that are ours," she said. "It's responsible to give a response to the expectations of our population."

The government has framed the new rules as part of the religious neutrality of the state, but it was unwilling to tamper with Quebec's religious heritage. The Liberal government refused to debate a motion by the opposition party Québec Solidaire to remove the crucifix over the Speaker's chair in the National Assembly. This means that the crucifix, which has hung on the wall for 81 years, stays in place. 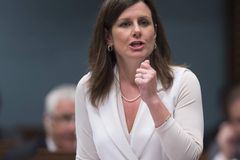 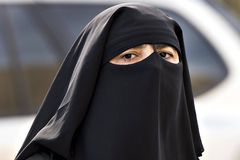 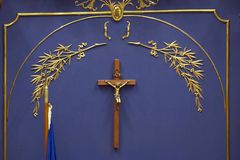