The head of Montreal's police union has thrown Philippe Couillard's government into another Quebec corruption crisis after he alleged political interference blocked criminal charges against a current Liberal caucus member.

Yves Francoeur, president of the Montreal police union, alleged law-enforcement officials asked him "to do something" after a person he did not identify blocked some 2012 criminal cases from going to court. The cases involved a current sitting Liberal member of the National Assembly and another who since resigned, Mr. Francoeur said Thursday.

Mr. Couillard won election three years ago promising he had expunged rotten elements of the Quebec Liberal Party at the centre of corruption scandals. The province has spent millions on a corruption inquiry during the Jean Charest years and criminal investigations that led to the arrest of a former deputy premier, Liberal-connected fundraisers, business owners, union bosses and big-city mayors.

Mr. Francoeur's allegations involving a sitting member thrust the question of corruption into the heart of the current government for the first time.

"There was an investigation [by police] in 2012 involving two elected Liberals, one of whom is still in caucus, and a real estate development company. Investigators had wiretaps, they had surveillance, they had everything they needed to proceed," Mr. Francoeur told Montreal radio interviewer, Paul Arcand. He added that the developer was allegedly linked to organized crime, and he contends that anyone but Liberal politicians would have been charged.

The province's head of criminal prosecutions along with Justice Minister Stéphanie Vallée and Public Security Minister Martin Coiteux urged Mr. Francoeur to make his allegations through the justice system.

Annick Murphy, the director of criminal prosecutions, said the case described by the union president never came to prosecutors. She said the conduct described by Mr. Francoeur is obstruction of justice and abuse of power and she criticized him for going public.

"I am extremely concerned by the assertions made by Mr. Francoeur. He is a police officer and apparently had information concerning grave misconduct brought to him, but he didn't bring it to us," said Ms. Murphy, who testified at a previously scheduled justice committee meeting on Thursday.

A spate of leaks and allegations about investigations of Liberal politicians has emerged recently. Quebec newspapers confirmed over the past week that a probe launched several years ago involving prominent Liberal fundraiser Marc Bibeau and Mr. Charest the former premier is continuing. The reports offered scant details about the alleged misconduct and both men have denied any wrongdoing.

Mr. Couillard accused Mr. Francoeur of "trying to bully" prosecutors and urged him to bring his complaints to the province's anti-corruption police. The Premier said leaks and unsubstantiated allegations could undermine the justice system.

Mr. Francoeur's union has been locked in lengthy dispute with the province over cuts to police pension plans. On Thursday, the government introduced legislation to ban the wearing of so-called clown pants – the multicoloured garb officers have been wearing for three years to protest cuts. Mr. Francoeur did not make any further public comments Thursday.

In the midst of a frenetic morning in the Quebec National Assembly and within hours of Mr. Francoeur's allegations, long-time Liberal member Sam Hamad abruptly announced his resignation.

He emphasized his departure was in the works for weeks and had "nothing to do" with the union president's allegations.

"I didn't wake up this morning and decide to go. There was nothing in the news today that made me decide to leave," said Mr. Hamad, a prominent cabinet minister under Mr. Charest. "It was simple, it's been 14 years. I've been around the block and have accomplished a lot."

Mr. Hamad was dropped from cabinet more than a year ago after allegations about his relationship with Liberal fundraiser and former cabinet minister Marc-Yvan Côté placed him in a conflict of interest.

The province's ethics commissioner found Mr. Hamad "abusively lobbied" on behalf of Mr. Côté's firm in 2012 and failed to uphold the values of the National Assembly but did not sanction him.

In a separate case, Mr. Côté was charged in 2016 with fraud, corruption and abuse of trust alongside former Liberal deputy premier Nathalie Normandeau. Their trials are not yet scheduled. 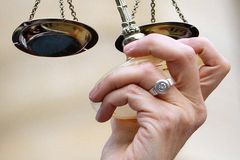