Cities and towns across Canada began to review their tradition of reciting prayers at the start of council meetings after the Supreme Court ruled that the practice in one Quebec community violated religious liberties.

In a unanimous judgment tackling faith and freedoms in Canadian public life, the court ordered the city of Saguenay to cease its prayer inside its council chambers and pay damages to the citizen who fought the case on the basis his rights as an atheist had been trampled.

The court awarded the citizen, Alain Simoneau, more than $30,000 in damages, and issued a legal rebuke to the outspoken and staunchly devout mayor of Saguenay, Jean Tremblay. The mayor had invoked history and Quebec's Roman Catholic heritage to justify his council's prayer, an argument the court rejected.

"Sponsorship of one religious tradition by the state in breach of its duty of neutrality amounts to discrimination against all other such traditions," Justice Clément Gascon, from Quebec, said in writing for the court.

Prayer is a religious practice, the court said. "Even if it is said to be inclusive, it may nevertheless exclude non-believers."

The judgment affirmed governments' responsibility to remain neutral, and its impact reached immediately into municipalities across Canada. Mayors in Ottawa, Lévis, Que., and Dieppe, N.B., began to review the towns' practice of reciting prayers, and some already vowed to jettison them.

The city of Ottawa did not recite its usual prayer on Wednesday invoking "Almighty God" before the start of council, as Mayor Jim Watson said he would review the practice to ensure the city conforms to the Supreme Court ruling.

Meanwhile, Oshawa, Ont., vowed to continue to recite the Lord's Prayer in defiance of the court decision, according to a news report.

The top court's judgment on Saguenay ended a lengthy judicial saga that pivoted on the contentious topics of private faith and state secularism in Quebec. Mr. Simoneau complained that Saguenay's prayer violated his freedom of conscience and, backed by a Quebec pro-secular group, won his case before a Quebec Human Rights tribunal. The decision was overturned by the Quebec Court of Appeal and landed before the Supreme Court.

While the highest court reaffirmed the duty of the state to maintain religious neutrality, it imposed no such burden on individuals – and, in doing so, sent a message from the bench at a time when legislators have proposed limiting the rights of some religious minorities to wear religious garb in civil-service jobs or at public ceremonies.

"Neutrality is required of institutions and the state, not individuals," Justice Gascon wrote. "On the contrary, a neutral public space free from coercion, pressure and judgment on the part of public authorities in matters of spirituality is intended to protect every person's freedom and dignity. The neutrality of the public space therefore helps preserve and promote the multicultural nature of Canadian society."

The decision also reopens the issue of religious symbols such as crucifixes in public spaces. While the court did not address the question of religious artifacts in Saguenay's council chambers, some jurists and politicians in Quebec said the ruling should drive the Quebec National Assembly to withdraw the crucifix that hangs over the Speaker's chair.

"I think the National Assembly is not the Catholic Assembly," said Luc Alarie, the lawyer who represented Mr. Simoneau and the Quebec Secular Movement in the court challenge. "It's up to the Speaker to ensure the neutral character of the National Assembly. He's seated right under a crucifix. He should withdraw it. It's his duty and obligation."

In their ruling, the Supreme Court justices pointedly rejected Saguenay's argument that its prayer was non-denominational; justices said the ritual itself as well as Mr. Tremblay's own comments undermined the case. During the prayer, in which Mr. Tremblay invoked "the Father, the Son and the Holy Spirit," the mayor stood and made the sign of the cross. Also, the court said, the mayor tipped his hand about his true intentions when he declared during his legal battle: "I'm in this fight because I worship Christ. I want to go to heaven and it is the most noble fight of my entire life."

The normally voluble Mr. Tremblay declined to comment on the ruling on Wednesday, saying he would speak on the issue on Thursday. 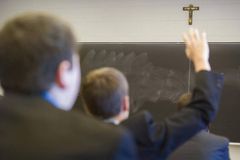 Erin Anderssen: Religious beliefs do not make it okay to shame and inconvenience other travellers
April 9, 2015