There were 25,000 partygoers on a rain-drenched Parliament Hill – and thousands of others stuck in endless security line-ups – as Prime Minister Justin Trudeau, Prince Charles and Bono sang Canada's praises.

All hailed the country's grand achievements as it turned 150 years old on July 1, even though a series of references to shaky relations with Indigenous peoples served as a constant reminder of the challenges ahead.

The rains stopped for most of the day-time ceremony at the feet of the Peace Tower, but the soggy grounds featured unusually large puddles close to the Centennial Flame. One of two screening areas for visitors was flooded at one point, slowing down a process already marred by long lineups. Families that arrived around 9 a.m., for example, only cleared security at 2 p.m., after the entire noon-hour ceremony was finished.

"This is really disheartening, seeing everyone walking home," said Mark Ford of Ottawa after the day-time show had finished. "Welcome to our great city where we don't really care about crowd control."

Mr. Trudeau and his wife, Sophie Grégoire Trudeau, were front and centre throughout the day. The Prime Minister introduced Canada's two newest astronauts during the day-time show and the couple will host the evening's musical ceremonies.

"We share a common pride in that red and white flag," Mr. Trudeau said in his main speech of the day. "But when we look back at our history, we notice that our past is far from perfect. If many of us are celebrating Canada's 150th anniversary, it's not the case for everybody. For centuries, Aboriginal people were victims of oppression, ever since the first explorers congratulated themselves for discovering a New World."

The Prime Minister said the issue is not the degree to which today's Canadians are responsible for the situation, but what they actually do about it.

"We can achieve reconciliation, but in order to get there, we must educate ourselves and dedicate our efforts to progress and work very, very hard to see it through over coming years and decades," he said to applause. "It is a choice we make not because of what we did or what we were, but because of who we are."

Mr. Trudeau wished happy birthday to people in all provinces and territories, but initially forgot to mention Alberta as he went through the list. He apologized on his second appearance on stage, offering his love to the province that is not known for electing many Liberals.

Before singing one of U2's best-known songs, the 1991 hit One, Bono made it clear that he made the speedy visit to Ottawa to celebrate Canada's positive influence on the world stage. He jokingly took responsibility for the rain as an Irishman, and then dedicated his song to everyone from Indigenous peoples to Syrian immigrants.

"When others build walls, you open doors; when others divide, your arms are open wide; where you lead, others follow. That's the real reason The Edge and myself are here today," he said, before repeating his message in shaky French.

Crowds started arriving early on Parliament Hill on Saturday for the full day of festivities. The Villeneuves were on the front row after leaving their home in nearby Carleton Place in the middle of the night.

"We're here until the fireworks," said Suzanne Villeneuve, who packed a day's worth of supplies.

Others were not as lucky. Police had warned would-be visitors to arrive two or three hours early, but that wasn't enough for many visitors who got stuck in significantly longer lineups and missed key events.

A planned Snowbird fly-by was cancelled because of low cloud cover for the day-time show and rescheduled for later in the afternoon. There was steady rainfall throughout the morning, leaving everyone who wasn't wearing a raincoat and boots soaking wet. "Ankle deep," said Steve Robertson of Orangeville, On., as he crossed a large puddle.

There were visitors from all over Canada and around the world, with the day's events capping off months of planning. "This is exciting," said Yuna Byrne who comes from northern Manitoba and was visiting her sister in Ottawa. "There are so many different people here, all celebrating together."

Volunteers gave hundreds of small Canadian flags to everyone arriving on the Hill.

"It's a wet one, but we're really enjoying it. This is Canada," said a volunteer who was standing in the rain with her two daughters.

Prince Charles and Governor-General David Johnston arrived on the Hill in a horse-drawn carriage after inspecting a ceremonial guard at the nearby Peacekeeping Monument.

"We should be clear and proud that we are celebrating a country that others look to for example. An example of fairness and inclusion, of always striving to be better," Prince Charles said in his speech. "Around the world, Canada is recognized as a champion of human rights, a peacekeeper, a responsible steward of the environment and natural resources and as a powerful and consistent example of diversity and the power of inclusion."

Prince Charles spoke about the need for "reconciliation" with First Nations, with the Governor-General praising Canada's "spirit of inclusiveness and of the desire to do things better." 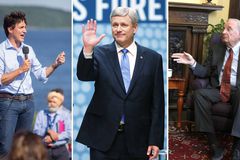 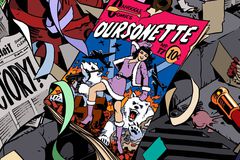