A lawyer is shot after a dispute over a loan for a landmark gay bar. A pregnant woman walks in just as the shooting starts. Police later discover three bodies in a house but they have to flee because the building is on fire.

In a rampage in a pair of Montreal suburbs, a businessman is believed to have killed his two sons, his former lawyer and a bystander, before taking his own life in his burning house. The outburst appears to be partly rooted in a dispute over a failed business venture.

While police are saying little about the case, the legal squabble links the suspect, 52-year-old Michel Dubuc, and the murdered lawyer, Benoît Côté.

Two years ago, Mr. Dubuc sued Mr. Côté and two other defendants – Marcel Poissant and his daughter, Nancy Giannoukakis-Poissant – for $1.2-million. The court dispute was still continuing last week when the violence erupted.

Ms. Giannoukakis-Poissant is the former owner of the Drugstore, a now-defunct bar that was once an institution in Montreal's Gay Village. She closed it in the fall of 2013 due to financial troubles. Weeks later, Mr. Dubuc filed his lawsuit against her, alleging that he hadn't been repaid for a $500,000 loan.

Police say Mr. Dubuc apparently had different reasons that led him to kill his sons, 21-year-old Jérémie and 19-year-old Gabriel, but they would not elaborate on the motives for the filicides.

Mr. Dubuc had been divorced from the boys' mother, France Ainsley, since 2002. Jérémie and Gabriel chose to live with their mother when she remarried a year ago, said Caroline Gosselin, a friend of Ms. Ainsley.

Sunday was the one-year wedding anniversary of Ms. Ainsley's new marriage, as well as her 51st birthday, Ms. Gosselin said. She described Ms. Ainsley as a woman who had lost her reason to live in the wake of her sons' deaths.

"There are no words strong enough to heal her," Ms. Gosselin said.

Mr. Dubuc has a checkered past.

In 1995, he was convicted of theft and fined. He declared bankruptcy in 2000, and he was also sued by the provincial revenue department, which said he owed $21,811.

Five years later, Mr. Dubuc started a small company selling cereal crops, Culture Multi-Grains Inc. By 2008, he and his company were sued for $71,592 by Synagri, an agricultural service provider. To represent him, Mr. Dubuc retained Mr. Côté's law firm. The dispute was settled out of court.

According to Quebec media outlets that have consulted the statement of claim, Mr. Dubuc alleges his lawyer, Mr. Côté, persuaded him in November of 2010 to lend $500,000 to Ms. Giannoukakis-Poissant, who was facing rent problems and was trying to buy the building housing her bar.

The following spring, the loan was due, with 16 per cent interest, but Mr. Dubuc didn't get his money back, he alleged in court. The court files, according to Journal de Montréal and La Presse, included an acerbic e-mail exchange in June, 2013, in which Mr. Dubuc wrote that he wanted things "settled tomorrow, final."

Mr. Côté wrote back: "We'd love to but you'll have to settle by yourself. No money, no candy. I can't do anything."

Months later, the bar closed and the dispute went to court.

On Thursday, police say a pistol-wielding man believed to be Mr. Dubuc entered Mr. Côté's law office in the community of Terrebonne, north of Montreal. The gunman fired shots that left Mr. Côté and notary Marie-Josée Sills critically wounded. Both died in hospital on Saturday.

Mr. Dubuc is the only suspect in the shooting at the legal office. Ms. Sills, who was pregnant, is said to have been an innocent bystander.

Then, in the early hours of Friday morning, in Boucherville, a 28-kilometre drive away on the other side of the St. Lawrence River, police received a 911 call from Ms. Ainsley, who was worried about her two sons.

Officers went to Mr. Dubuc's home in Boucherville. Inside, they found the bodies of Mr. Dubuc as well as his sons. A fire had started in the house and the officers had to leave as the rooms were filling with smoke. Firefighters had to be dispatched to douse the flames.

Police say they believe it was a murder-suicide. Mr. Dubuc is believed to have set his house on fire. Officers could smell the accelerant. And they confirmed the suspect was connected to the shooting at the law firm.

"We are not looking for a suspect [in the law-firm shooting] because the suspect was one of three men found dead in Boucherville," said Sergeant Mélanie Dumaresq, a spokeswoman for the Sûreté du Québec, referring to Mr. Dubuc.

On Saturday night, Ms. Gosselin organized a candlelight vigil for the two boys in Boucherville. Mourners remembered Gabriel, who worked at a convenience store and was known as a friendly, ambitious youth, and Jérémie, who worked at the local Ikea outlet, where the flags outside were at half-mast. 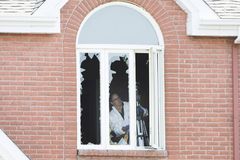