Canadian police have laid their first charges under a 2013 law criminalizing travel for the purposes of terrorism, accusing a B.C. man who is still overseas of going abroad to help Syrian jihadists commit "murder."

Hasibullah Yusufzai, a 25-year-old from Burnaby, a Vancouver suburb, is alleged by the RCMP to have left Canada in January "for the purpose of committing … an indictable offence, to wit: Murder." He is accused of doing so "in association with a terrorist group."

This charge, tersely reflected in a one-paragraph sworn police statement, represents a significant broadening of Canadian law. In an attempt to stop potential acts of terrorism, police and prosecutors are expanding their legal reach.

A federal intelligence official testified early this year that more than 130 Canadians are part of extremist groups abroad. Over the past 18 months, several Canadians have reportedly died while perpetrating al-Qaeda-inspired terrorist attacks, which may have killed about 100 people in Algeria, Somalia, and Iraq. Officials fear that carnage could be replicated in North America should dangerous extremists head back home.

What is known in the case against Mr. Yusufzai is reflected in the police statement, which was filed in a Richmond, B.C. courthouse on July 17. It is not clear why the RCMP singled out Mr. Yusufzai as a test of the new law, though the charge suggests detectives have amassed evidence they lack in other cases. It's often extremely difficult for police to obtain witness statements and gather other evidence in foreign conflict zones.

"The individual is known to have travelled to Syria to join Islamist fighters," is the only additional information that an RCMP spokesman, Corporal David Falls, would provide.

Family members in B.C. say Mr. Yusufzai is actually working in a restaurant in Turkey, and calls them on Skype. They say that he has been smeared. "He's harmless," a brother said.

Relatively little is known about the suspect, who appears to have been raised in Canada by immigrant parents. One neighbour outside his family's rented apartment told The Globe that starting three years ago, the young man began to change – becoming more religious, dressing in more traditional Islamic clothing, and even mentioning "jihad." "He changed 100 per cent," that neighbour said.

Federal officials are not releasing any details about what Syrian faction Mr. Yusufzai allegedly joined or just whom he is supposed to have wanted to kill. It is also unclear whether any act of "murder" or specific plot ever took place.

Specific details, federal officials say, won't be released until Mr. Yusufzai faces trial – a proceeding that will never happen so long as he remains outside of the country.

However, should Mr. Yusufzai be apprehended in a country that has an extradition treaty with Ottawa, he eventually could be brought back to Canada on the charge.

Past prosecutions of terrorist plots hatched on Canadian soil show that federal police and prosecutors take few chances when laying terrorism charges, relying heavily on wiretaps, intercepted e-mails and police infiltrators. And specific evidence is kept secret until trials start, usually three or four years after a suspect is arrested.

On Thursday, a Toronto man recently convicted of boarding a plane to join terrorists in Somalia will find out what his jail sentence will be.

Charged in 2011 under catch-all anti-terrorism laws that foreshadowed the stronger 2013 terrorist travel law, Mohamed Hersi was arrested by the RCMP at Pearson Airport while holding a boarding pass to Egypt. He faces up to 10 years in jail.

Mr. Hersi's lawyer says that he will be asking appellate judges to rein in Ottawa's criminalization of alleged incremental steps toward terrorism.

"It's thought crime if it's too far removed … it's like Minority Report, where you try to criminalize acts before you do them," said Paul Slansky, in an interview.

Much of the evidence in the Hersi case was drawn from an undercover police officer who testified that the accused talked about wanting to join the al-Shabab terrorist group in Somalia.

Though a Toronto jury was persuaded that this talk, plus the planned flight, amounted to criminal terrorism, Mr. Slansky remains doubtful. "It puts everyone's life, liberty, and security of person in danger if you start criminalizing talk, which is what happened in Hersi." 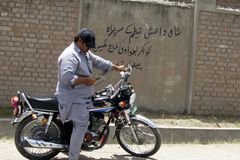 Follow Colin Freeze and Sunny Dhillon on Twitter @colinfreeze @TheSunnyDhillon
Report an error Editorial code of conduct
Due to technical reasons, we have temporarily removed commenting from our articles. We hope to have this fixed soon. Thank you for your patience. If you are looking to give feedback on our new site, please send it along to feedback@globeandmail.com. If you want to write a letter to the editor, please forward to letters@globeandmail.com.
Comments are closed