Early this month, RCMP Sergeant Chris Backus and his colleagues purchased some neon pink and orange duct tape. The West Coast Mounties stuck it on top of the traditional yellow pant stripes running the length of their legs. With that, they helped kick-start a workplace protest that spread like wildfire among uniform-wearing Mounties from coast to coast.

The subtle but significant show of Mountie disgruntlement is intended to draw attention to wages and working conditions in the national police force. Pay for police officers has stagnated in the RCMP, even as paycheques in big-city forces have ballooned.

In those cities, it is not unheard of for police to alter their uniforms when they want to make a statement. But for Mounties, it's only recently that long-standing lines have started to fade. Stoicism, discipline and deference to the chain of command have always characterized the RCMP rank-and-file.

Yet this is changing as Canada's biggest police force wrestles with stalled salaries, the looming prospect of a police labour union and ongoing officer-safety issues starkly highlighted by a Labour Code prosecution.

The RCMP will be put on trial in Moncton on Monday. The federal labour department's law-enforcement wing has charged its police-force cousin with four counts of having failed to provide patrol officers with sufficient skills, equipment or weaponry to defend against a gunman who shot three Mounties dead in 2014. Should the RCMP be convicted of this it could pay millions of dollars in fines.

The two-month trial threatens to highlight a series of chronic issues that ordinary Mounties suggest have long been swept under the carpet.

"When it comes to equipment, when it comes to pay, the RCMP is the dollar store of policing," Sgt. Backus, of the RCMP's Sunshine Coast detachment, said in an interview, adding that thousands of Mounties have joined the pant-stripe protest. Rhyming off complaints about staff shortages, broken squad cars and dangerous duties, the 19-year veteran said he is past the point of caring about the career consequences of urging colleagues to tape over a yellow stripe that harkens back to 19th-century cavalry traditions.

"If I get disciplined, or if I get fired for this, it will be the proudest moment of my RCMP career," he said.

The image of Constable Douglas Larche in his traditional RCMP uniform is now cast in bronze. In Moncton, a statue memorializes him and two other officers shot dead within 20 minutes of each other.

Constable Larche's widow says she supports the pant-stripe protest and the labour-code trial in the hope that they prompt discussion and action.

"I feel that this trial is sadly needed to make it safer for police officers," Nadine Larche, a mother of three daughters, told The Globe.

Mr. Bourque is now serving what is considered the toughest life-sentence – no chance of parole for 75 years – ever meted out in Canada.

What's at issue during the current trial are operational decisions made by senior RCMP commanders who had the job of rolling out training, weapons and equipment to detachments across Canada.

There is no question that the RCMP were badly outgunned in Moncton. Pistols and short-range shotguns proved no match for Mr. Bourque's military-style rifle.

Compounding the tragedy was the fact that bigger guns had been promised for years, but were not yet available to detachment members. "The time it took to roll out the carbine project, including the training and delivery of the weapons to members of the RCMP, has taken far too long," reads a 2014 postmortem report on the Moncton massacre.

For the wider public, police labour unions are polarizing. They aggressively promote officer safety and salaries, but often at significant public cost. The RCMP leadership has also lately expressed fears about "militarization" – or the notion that police develop a siege mentality and lose vital problem-solving skills if powerful weaponry and armour are always within reach.

The Mounties have never had to contend with a union. For decades, commanders in Ottawa have quashed and co-opted bids by the rank-and-file to organize. With the potential to represent nearly 18,000 cops, such an entity would be strong enough to challenge almost all entrenched police policies in Canada. But in 2015, the Supreme Court ruled it was unconstitutional for the Mounties to be blocked from unionizing.

On April 18, a Mounties-only group known as the National Police Federation (NPF) announced it had filed a formal bid, having signed up 10,000 RCMP officers. This represents a majority of the force.

While the unionization process could take years to play out, the ongoing fiscal prudence of Ottawa officials has had the unintended consequence of galvanizing groups.

On April 5, Public Safety Minister Ralph Goodale announced a much-anticipated retroactive RCMP raise. Yet the annual pay bumps of 1 per cent and 2 per cent were so underwhelming that many of the fence-sitters on the force immediately cast their lots with the NPF.

"A lot of members were waiting to see whether they would take care of us. And they didn't," says RCMP Sergeant Brian Sauvé, a co-chair of the NPF.

The NPF basically doubled in size in the span of that week in early April, Mr. Sauvé said, to lock down its majority of RCMP members. Separately, thousands of Mounties also joined the grassroots pant-stripe protest.

"They haven't had the gap closed in a decade and now it's getting wider," said Senator Vernon White, a former RCMP assistant commissioner. "Police services are making $96,000 to – in Calgary – $102,000 a year."

Confronted with all this, RCMP Commissioner Bob Paulson has appealed for labour calm.

In an internal statement circulated mid-month, Commissioner Paulson told his officers he didn't support the pant-stripe protest, but wouldn't discipline subordinates for participating in it.

The retiring commissioner urged patience, adding that RCMP members could probably count on their "revolutionary" organizing efforts to win them some significant salary gains in the years to come.

"What needs to be recognized and remembered by us all, in my opinion, is the impending reality of a unionized RCMP work force," he said. 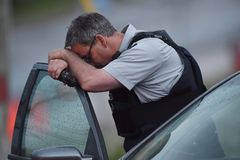 Judge lifts publication ban on RCMP case against Vice-Admiral Norman
April 21, 2017
Follow Colin Freeze on Twitter @colinfreeze
Report an error Editorial code of conduct
Due to technical reasons, we have temporarily removed commenting from our articles. We hope to have this fixed soon. Thank you for your patience. If you are looking to give feedback on our new site, please send it along to feedback@globeandmail.com. If you want to write a letter to the editor, please forward to letters@globeandmail.com.
Comments