The RCMP is eyeing a policy change for organized crime investigations to better protect the rights of journalists, newly disclosed documents say.

The possible move follows revelations in Quebec about surveillance of reporters by provincial and municipal police and growing concern about the ability of journalists to shield sources from authorities.

Under a 2003 ministerial directive, the RCMP must take special care in national security investigations involving sensitive spheres such as the media, politics, academia, religion and unions.

It means Mounties must seek high-level approvals before engaging in terrorism and espionage probes that touch these sectors.

"Recognizing the sensitivity of investigations involving the media, we are currently discussing how to apply this national security related ministerial directive to all RCMP federal investigations, such as those involving organized crime," internal Mountie briefing notes say.

The Canadian Press recently obtained the November 2016 notes through the Access to Information Act.

Public Safety Minister Ralph Goodale, the cabinet member responsible for the RCMP, has previously said the government is reviewing the 2003 directive to ensure the language is sufficient to safeguard press freedoms.

"That work is ongoing," said Scott Bardsley, a spokesman for Goodale.

"Freedom of the press is a fundamental Canadian value protected by the Charter of Rights and Freedoms and our government will defend it assiduously."

The internal notes say the Mounties do not engage in activities to investigate or disrupt the efforts of journalists that are protected by the charter. "That said, the RCMP does have the mandate and responsibility to investigate criminal activity, which could involve individuals in a variety of professions, including journalism."

The RCMP's push to broaden the 2003 ministerial directive could spring from a desire within the force to avoid the pitfalls of spying on journalists — such as the current glare of publicity in Quebec, suggested Wesley Wark, a national security expert at the University of Ottawa.

In 2007, the RCMP contravened the ministerial directive in conducting physical surveillance of two journalists in an attempt to identify the person who leaked a classified Canadian Security Intelligence Service document.

The surveillance was unauthorized and ended once RCMP management became aware.

The 2003 directive is "not an immunity provision," but rather is aimed at ensuring there is not "some lower-level constable who's running amok," said Craig Forcese, a law professor at the University of Ottawa.

Extending the directive to the RCMP's organized crime probes could protect journalists who are "collaterally swept into a police investigation," Forcese said.

A related issue is whether journalists can be shielded from having to reveal their sources and essentially becoming proxies for police investigations, he added.

Ontario's top court recently ruled Vice Media reporter Ben Makuch must give the RCMP the background materials he used for stories on an accused terrorist — a case that squarely pits media freedoms against the powers of police.

A Quebec senator has introduced a bill he calls the first concrete legislative measure in Canada to protect journalistic sources following a spate of cases in which reporters have come under police surveillance.

Conservative Sen. Claude Carignan said in November he was compelled to table the private member's bill after learning that Montreal police obtained warrants to monitor the iPhone of La Presse journalist Patrick Lagace.

The Quebec provincial police force has also acknowledged tracking the communications of journalists.

The federal government says it is assessing the "legal, technical and operational impacts" of Carignan's bill.

Under questioning from the NDP in the House of Commons, Prime Minister Justin Trudeau said this week that journalists "should always be able" to protect their sources. 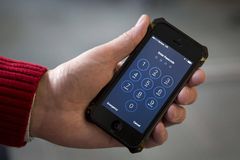