They were known as the Fighting Schans.

Jim, Jack, John, Joe, Leo, Leonard, Nick and Dorothy. Seven brothers and one sister from Lethbridge, Alta. – all Schans, all enlisted in the military during the Second World War. No immediate family is believed to have contributed more soldiers to Canada's war effort.

But as Canada prepares to mark Remembrance Day with an ever-diminishing number of surviving veterans from those far-off days, the Schans' remarkable contribution is all but forgotten.

The Royal Canadian Legion headquarters in Ottawa had never heard of them; they are barely mentioned online; and even in Port Alberni, B.C. – where four of the Schan brothers washed up to work on the docks after the war, and where a waterfront plaque pays tribute to the family – few know much about them.

"The who?" Port Alberni Mayor John Douglas said this week when asked about the Schans. A call to the local Legion produced a reference to the Port Alberni museum for more information.

Blame the passage of time, of course, but also the fact that the Schans scattered across Canada when they came back, and, like so many returning veterans, simply did not talk about the war.

The four who settled in Port Alberni – Jack, Joe, Nick and Leo – longshored together, partied together, and lived up to their reputation as the Fighting Schans by occasionally brawling together.

"But I never heard any of them mention the war much," said Jack's son, Gary.

"It never occurred to me there was anything special about so many of them joining the army.

"They just did their duty and that was it."

Yet the brothers were hardly slouches on the battlefield. One was killed overseas, four were wounded, and their war record included several valiant exploits mentioned in dispatches that resulted in special medals.

"He said the king was a little fellow, just like him," recalled Leo's widow, Mae.

The Schan enlistees were among 13 children produced by Russian immigrants Leonard and Mary Schan, who had them like clockwork between 1905 and 1925.

The family bounced around the prairies before settling in Lethbridge, where Leo presaged his fighting spirit with a short but successful career in the ring, boxing as a featherweight under the moniker "Alberta's Toy Bulldog."

Now, none of the Schan brothers and sisters are alive to tell their story except for Margaret Rose, who is in poor health in a care home.

That they are remembered at all in Port Alberni is a tribute to former Merchant Navy seaman Chester Ross, who worked for years with the Schans as a longshoreman. When Merchant Navy veterans like Mr. Ross finally received benefits from the Canadian government, he used some of his $10,000 settlement to help pay for the Schans' memorial plaque on the local waterfront.

"I worked with them, and I wanted them to be recognized for what their family did," said Mr. Ross, 84. "I wrote to the government and talked to our MP about it, but they didn't do anything."

"They fought in streets, alleys and bars," the plaque reads, in part. "They fought for human rights and for union brothers' work rights."

Remaining relatives aren't wild about the wording, but agree that it was not far off the mark.

"They were good guys. They were well-liked," Gary Schan said. "But if you picked on one, you got 'em all. They were a bunch of scrappers."

And on Sunday in Port Alberni, the Schans will be remembered, however fleetingly, once again.

After the community's official Remembrance Day ceremonies at the old drill hall, a small group will wend its way to five locations around town for a few more words and a wreath-laying.

The Fighting Schans' memorial is stop four on the journey.

Until ill health forced her to stay home the past few years, Mae Schan used to lay the wreath there. But her thoughts will be with her husband and his brothers. "They were such nice, nice kids."

She said Nov. 11 was always a special day for Leo. Not only was it a time to remember, it was his birthday. Leo Schan was born, fittingly perhaps, on the very first Remembrance Day, Nov. 11, 1919.

"He used to joke about it," Mrs. Schan said. "It was a sign, so the Germans knew he was coming." 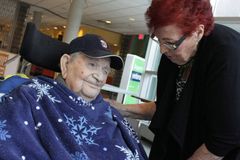 Facts & Arguments
Lest I forget: lessons from my grandson
November 8, 2012 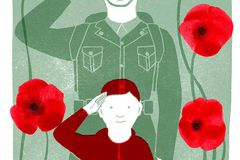 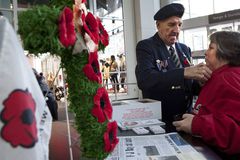