A 180-page review of the Moncton shooting recommends better training for supervisors and officers in how to handle high-risk situations, and training on the use of hard body armour.

these recommendations have been edited for length and clarity 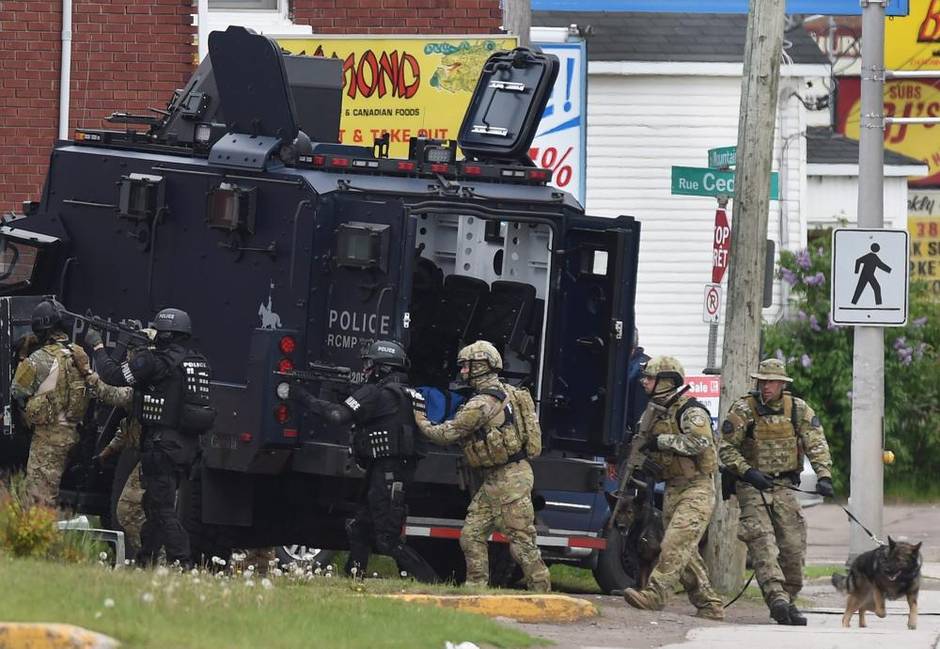 A 180-page review of the Moncton shooting recommends better training for supervisors and officers in how to handle high-risk situations, and training on the use of hard body armour.

When the 911 call came in on that June day about an armed man dressed in camouflage and roaming a Moncton suburb, the RCMP responded quickly – but only one officer thought to grab a shotgun, while the others left with their service pistols. Not one of them donned hard body armour.

Police were no match for Justin Bourque, who, unlike them, was armed to the teeth with high-powered weapons, an excellent knowledge of guns and a hatred for authority so strong that he had decided to wage war on them.

Leaving with limited firepower was the first of many mistakes, miscues and miscommunications on June 4, 2014, as events unfolded quickly and violently, resulting in the death of three officers – Dave Ross, Fabrice Gévaudan and Doug Larche – and the injuring of two others.

Confusion reigned at the scene – communications faltered and there was no clear direction from senior officers. As Constable Gévaudan lay dying in the backyard of a suburban home, critical information about his location, the fact that he was shot by a high-powered rifle or the degree of his injuries was not broadcast because the officer attending to him had lost his radio and had no cellphone. 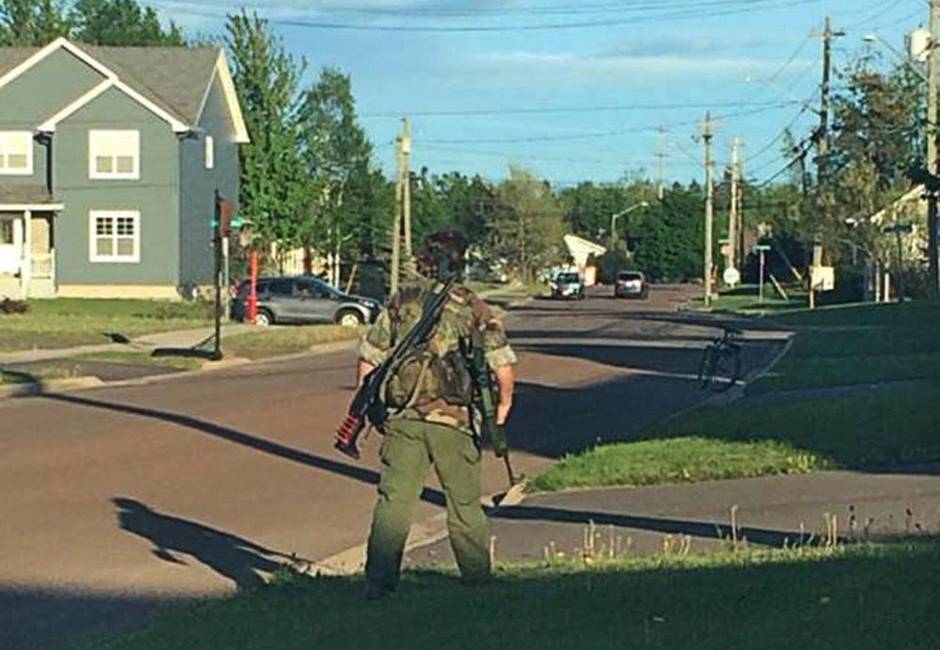 Justin Bourque is seen in this photo taken in June 4, 2014. (Handout/RCMP)

Less than two minutes later, Constable Ross was shot down – and a second wave of officers dispatched to the scene also neglected to put on body armour as another officer asked on the radio “who’s injured?” No one knew how many ambulances to send.

One officer unknowingly drove directly to Mr. Bourque’s location. That’s because she was on a separate radio frequency from her colleagues – and so had no information that he was right there firing bullets at police cars. She was shot, but survived.

These chilling revelations are part of a 180-page independent review of the Moncton, N.B., shootings released Friday. It was conducted by retired assistant commissioner Alphonse MacNeil and contains 64 recommendations, including better training in how to handle critical situations for supervisors, more training for officers in how to handle high-risk situations and on the use of hard body armour. As well, the report calls for encrypted radio systems for officer safety. The RCMP says it has accepted all of the recommendations.

Mr. MacNeil’s report is detailed and frank. He says his focus was on officer safety. “I wasn’t thinking about, ‘Will people think it’s blunt or it’s not blunt,’” he said. “I think it is to the point. I really believe it stands on its own. And anyone who reads it will see that it doesn’t favour anyone other than officers’ safety.”

“There’s nothing being hidden,” said Staff Sergeant Abe Townsend, the head of the force’s Staff Relations Representative Program, an elected body for more than 22,000 RCMP members. “You don’t see that [level of transparency] in many places, and certainly not in policing … These things are now in the public domain. This report belongs to all of Canada.”

As the situation became even more chaotic on that June evening, officers were talking over one another on the radio, giving irrelevant information or sometimes valuable information that was lost, according to the report.

Talking in “10-code” (10-4 means “okay,” for example) over the radio rather than using plain language also contributed to “confusion as to the severity of the situation,” says the report.

Police, however, were reluctant to speak plainly as they wanted to avoid “broadcasting details to the public,” according to the report.

“Moncton has avid monitors of police transmissions and unfolding calls were routinely posted to a news-chasing group on social media.” In addition, no broadcast was made by a commander warning officers about the severity of the threat, leaving them vulnerable; some officers had no clue about the full scope of the fatalities until hours after the event.

Eventually, about 700 police officers from across the region were involved in the incident, during which Mr. Bourque had the New Brunswick city was under lockdown for more than a day. 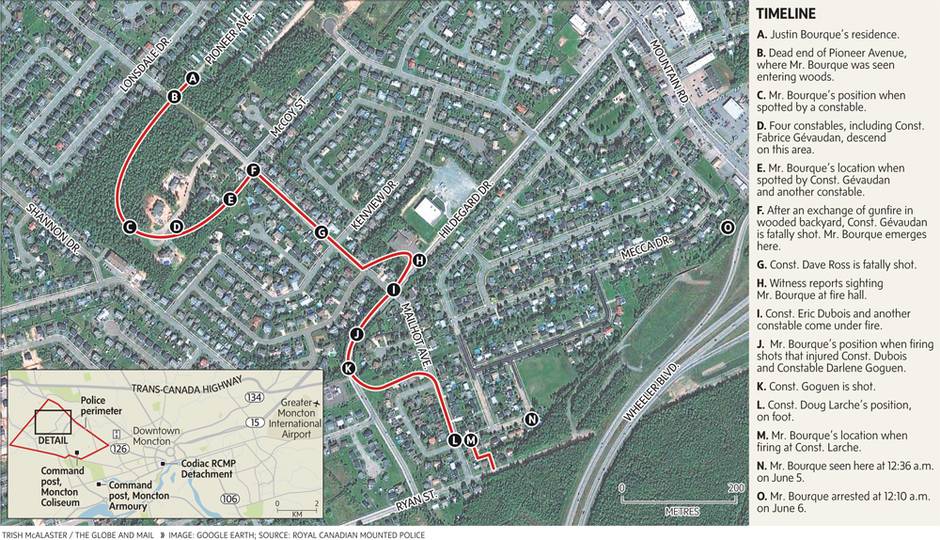 In his review, Mr. MacNeil provides a heartbreaking anecdote about a discussion between two officers over wearing hard body armour (HBA): “The Review Team learned through interviews that one member opted to go without HBA so that her colleague, who had children, could have the protection of HBA.”

The report notes: “Members should never be in the position of having to decide who gets to wear the HBA.”

But many officers, according to the report, had no idea that the armour was in their cars or were familiar with how to wear it.

It is acknowledged in the report that hard body armour would not have saved the officers’ lives, given the location of their injuries. But the report emphasizes that it is an important tool for the RCMP.

Important, too, was the fact that shotguns were available to officers, but they chose not to use them, even when they were up against Mr. Bourque and his personal cache of five firearms, including a semi-automatic rifle and a 12-gauge shotgun. 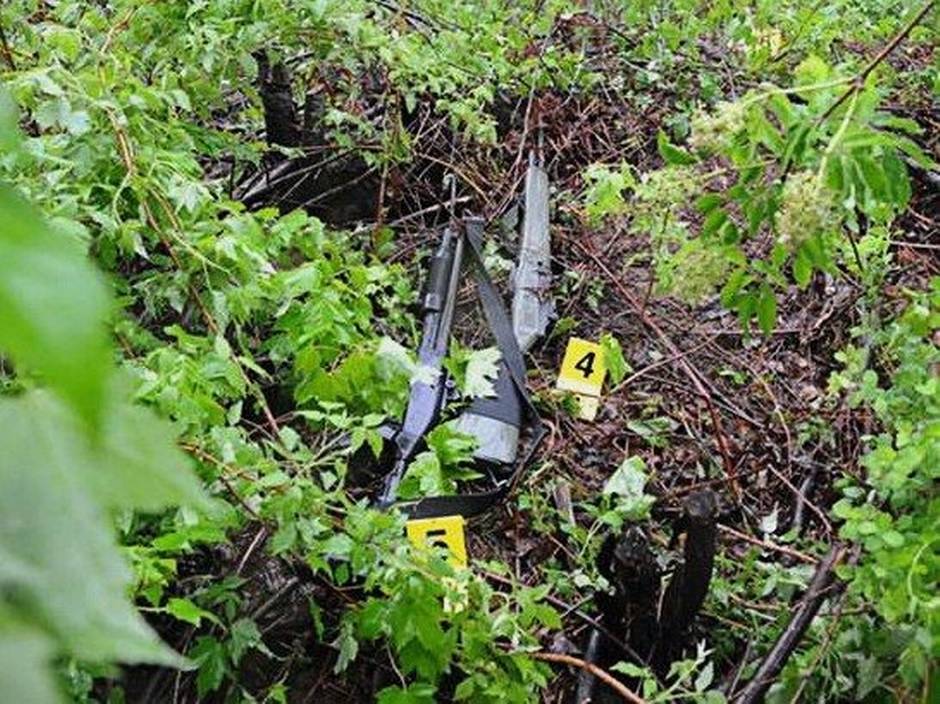 “Tactically, armed with service pistols and one shotgun, they were at a disadvantage due to the superior fire power and range of the shooter’s weapon,” says the report. “The tactical advantages are overwhelming in favour of Bourque.”

When the extent of Mr. Bourque’s weaponry was realized, one off-duty officer brought his own scoped hunting rifle to the scene.

The report looks at the issue of the “patrol carbine” – a high-powered rifle similar to an M-16 – that front-line officers are being trained on as a result of the Mayerthorpe Mountie killings in 2005.

At the time of the Moncton shootings in June, only two officers in New Brunswick had been trained on how to use the carbines – and they were not in Moncton that day. Now, 120 have, according to Assistant Commissioner Roger Brown.

In his report, Mr. MacNeil writes that “the patrol carbines would have given a more effective lethal-force option and could possibly have influenced members’ risk assessments, tactical approach and confidence levels.”

Constable Larche, meanwhile, had a shotgun but was shot by Mr. Bourque, who was less than 20 metres away, as he got out of his car.

The report notes that despite being seriously wounded, Constable Larche did not give up: “He struggled back to his feet and drew his pistol to engage the gunman. Constable Larche fought until the end, firing seven rounds, the last after being hit by what proved to be the fatal shot.”

At that point, says the report, “Tactically, the situation was not under control.” 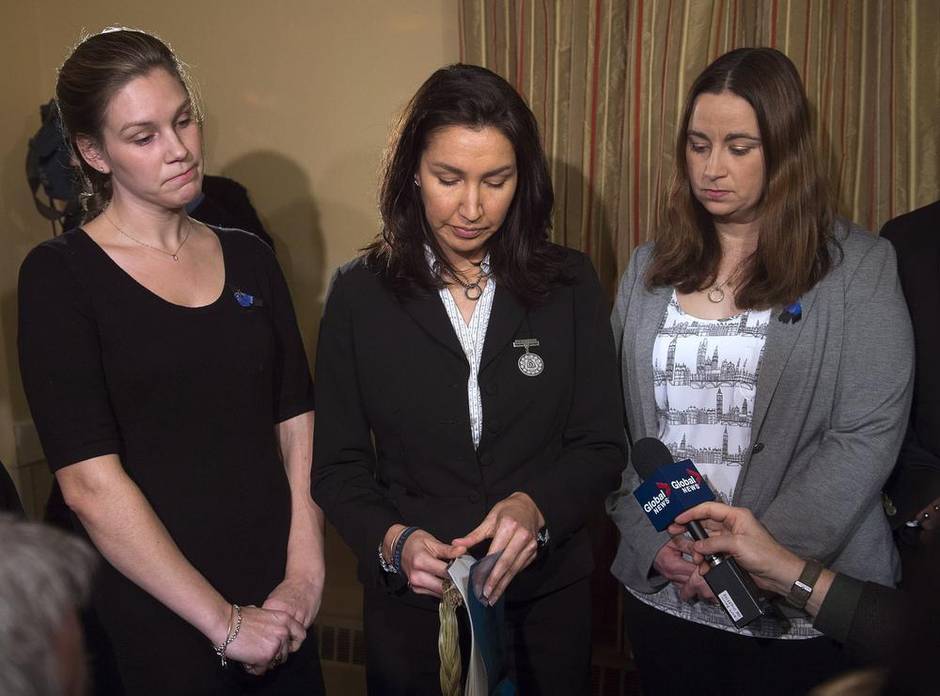 This weekend, Constable Doug Larche’s family will celebrate the man’s birthday, his first since he was killed in the June 4 Moncton shootings that robbed his wife of a husband and his three daughters – his “girlies,” as he called them – of their father. Aside from Valentine’s Day, this is the last of such firsts for a family that just endured Christmas and New Year’s without their loved one.

On the eve of Constable Larche’s 41st birthday, which the family plans to mark with a celebration honouring his life, his wife, Nadine Larche, stood alongside the two other women who also lost their husbands that day.

The three women – Ms. Larche, Angela Gévaudan and Rachael Ross – appeared publicly together Friday on the occasion of the release of a much-anticipated independent report probing the RCMP’s response to the shooting.

Ms. Gévaudan was flanked by the other two wives and was the only one to speak. “To me, this report is the vehicle for the changes that are needed to ensure the safety of our officers,” she said, adding she had hoped to speak off the cuff but had to use notes because her memory “has not been functioning normally.”

On Thursday, RCMP Commissioner Bob Paulson and the report’s author met with the families of the fallen in Moncton. “The families were provided with a personal briefing and were given copies of both documents,” RCMP spokesman Greg Cox said in an e-mail, referring to the report and the RCMP’s response. “This allowed the families the opportunity to better understand the circumstances surrounding the tragedy and to ask questions in private.”