The young children who lived at the St. Anthony Orphanage and Boarding School in Labrador shared the beatings.

"We'd all be lined up," 59-year-old Richard Preston told a court in St. John's last week, shutting his eyes as he spoke, his voice breaking. He was 3 when he went to live at the orphanage. "There'd be four belts hanging on the wall. They'd make us pick out which one to whip us with."

Seven years ago, the Canadian government apologized to the former students of Indian residential schools and authorized the payment of billions of dollars in compensation. But the apology and compensation did not apply to Newfoundland and Labrador – even for abuse after the province joined Confederation in 1949. And so, Mr. Preston and several other indigenous Canadians went to court to tell their stories of abuse suffered at several schools, dormitories and orphanages, as part of a class-action lawsuit against the Canadian government.

The case is a major challenge for the first aboriginal Justice Minister in Canadian history, Jody Wilson-Raybould, and the new Liberal government that inherited it. Prime Minister Justin Trudeau has promised to implement all 94 recommendations of the Truth and Reconciliation Commission, one of which called on the federal government in particular, as well as those who are suing it, to settle all outstanding legal claims expeditiously, based on agreed statements of facts.

The question is whether the Liberals will break with the past and settle the claim, as Mr. Trudeau promised, or continue the approach of previous governments.

Ottawa has taken the consistent position – from the time the Liberal government of Paul Martin first negotiated an agreement in principle in 2005, until Conservative Prime Minister Stephen Harper finalized it the following year – that Newfoundland and Labrador was different from the rest of the country, where schools were a program of forced assimilation run as a partnership between Ottawa and churches, beginning in the 1880s. Children were barred from speaking aboriginal languages, and were subject to physical and sexual abuse and neglect. The last school closed in 1996.

In Newfoundland, the government contends, aboriginals were not isolated on reserves and were not forced by Ottawa to attend residential schools, as they were in the rest of the country. Nor did Ottawa operate or oversee schools and residences attended by aboriginal children, sometimes alongside non-aboriginal children. (The province created and ran some of the facilities in Newfoundland and Labrador; churches and religious charities also created and ran some institutions. A charity created St. Anthony's orphanage under the auspices of the provincial welfare department.)

And nor did Ottawa know about the abuse, federal justice department lawyers say.

"If students were abused in these facilities, then the evidence will not show Canada had (or should have reasonably have had) knowledge of any allegations of such abuse," the government says in a court filing.

Last week, on the same day Mr. Trudeau became prime minister, the court heard details of that abuse from Mr. Preston and others. "I never had anyone tell me they loved me until I was in my late 20s," he said, after telling the court that staff made him take his urine-stained bedsheets to the room where the children ate breakfast and refused to let him eat.

Another, Nora Ford, 63, testified that she started at the Lockwood School and Dormitory in Cartwright, Labrador, at age 6, and on the first day her long black hair was chopped off and her scalp washed with something that smelled like kerosene. She said she and others were so hungry they would steal dirty root vegetables from the cellar, and she developed a tapeworm. A third, Barry Allen, a convicted murderer, testified from Dorchester Penitentiary in New Brunswick, where he is serving a life sentence. He said a staff member at Yale School and Dormitories in North West River, Labrador, had molested him.

Lawyers involved in the class-action lawsuit say there are 1,000 to 2,000 former students in the group seeking damages. If they are compensated in the same way as in the 2007 settlement, the cost would be roughly $100-million. That 2007 settlement allotted $1.9-billion to all students, simply for attending – $10,000 plus $3,000 for each year. It also authorized additional compensation for physical and sexual abuse. All told, the cost of the 2007 settlement will be $4-billion to $5-billion, lawyers estimate.

Kirk Baert, a Toronto lawyer whose firm is one of three involved in the class-action lawsuit in Newfoundland and Labrador, argues the federal government had a direct role in overseeing the facilities, and that even if it had no such role, Ottawa owed a "duty of care" or protection to the indigenous children. He also said he does not dispute that "a few" non-aboriginal children attended the facilities, just as in residential schools in the rest of the country.

"This was the policy of all of our governments at the time. It doesn't make any sense to treat the victims differently because the same policy was implemented by different levels of government in different ways. [The children] suffered the same way."

Richard Preston's brother Robert, 58, who also testified this week, was asked in an interview about being left out of the earlier settlement: He said he has endured a lot in his life, "so this is just another bump in the road." (He went to a public school but said he suffered abuse at the St. Anthony orphanage where he went to live around age 4, after his parents divorced.)

The 2007 settlement came in response to myriad class-action and individual lawsuits around the country. Mr. Baert said part of the reason for the settlement was to spare victims from having to testify in court about the loss of their culture and their physical and emotional suffering at residential schools.

Truth and Reconciliation chair calls on Trudeau to ask for apology from Pope
November 3, 2015 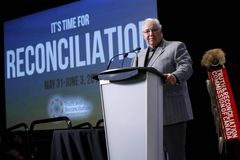 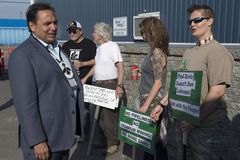 Follow Sean Fine,  on Twitter @seanfineglobe
Report an error Editorial code of conduct
Due to technical reasons, we have temporarily removed commenting from our articles. We hope to have this fixed soon. Thank you for your patience. If you are looking to give feedback on our new site, please send it along to feedback@globeandmail.com. If you want to write a letter to the editor, please forward to letters@globeandmail.com.
Comments