For years, residents near Pigeon Lake in Southern Ontario were unhappy with a local wild rice harvester who was seeding the lake, filling their shorelines with the marshy plant. But when the locals decided to take action and cut down the plants, the simmering tension exploded into a fight over treaty and property rights.

The issue revolves around the northern wild rice that grows on Pigeon Lake, in the Kawartha Lakes region, about 150 kilometres northeast of Toronto. The rice, which grows in tall, thick stalks, has always been a part of the lake's ecosystem.

The rice, also called manomin, is much more than a staple food, according Susan Blight, an Anishinabe activist and artist in Toronto.

The rice has proliferated in recent years, and now covers an estimated 10 per cent to 15 per cent of the lake's 57 square kilometres.

Larry Wood, a local, said he noticed a First Nations man spreading rice seeds across the lake a few years ago. It is that seeding he blames for the spread of the rice, which he says has now made the waterfront inaccessible for boats and is bringing down property values.

"The rice has just proliferated to the point where homeowners are having the rice growing along their shorelines. They didn't have the use of their waterfronts any more," Mr. Wood said.

The man in question, James Whetung from the nearby Curve Lake First Nation, admits he is seeding the lake. The rice Mr. Whetung collects is sold through his business, called Black Duck Wild Rice. A portion is also donated to the area's Curve Lake community. He said he's trying to revive the rice beds and the local indigenous culture.

"Our people have had a relationship with [the rice] for thousands of years," Mr. Whetung said.

The issue becomes more complicated because Mr. Whetung harvests the rice both through his treaty on the lake and as a provincially licensed harvester on the waters surrounding the lake.

Mr. Wood says he takes issue with Mr. Whetung's use of an engine-powered boat, mainly because of how far it spreads the rice. "The propeller of the engine basically spreads that seed far and wide," he said.

Parks Canada gave Mr. Wood and some other residents, who formed a group called Save Pigeon Lake, permits to clear some of the rice on the lake using combines. Mr. Wood said the permits allowed each person to remove a square of 100 feet by 100 feet.

The permits turned the matter from a local dispute into a bigger question of treaty rights.

The Curve Lake First Nations said that by issuing the permits to remove the rice without having first consulted with the First Nations community, Parks Canada violated their treaty.

Karry Sandy McKenzie, the spokesperson for the Williams Treaties First Nations, which includes Curve Lake, said there were reports of residents going beyond their permitted area, but that was not as big of an issue as failing to consult with the First Nations.

"It's not simply a matter of whether they were outside the permitted area or what they were doing. It's the matter of the duty to consult. … They're [affecting] constitutional rights," she said.

In a statement, Parks Canada acknowledged they did not fulfill their duty to consult with the Williams Treaties First Nations. They asked residents to voluntarily stop the clearing of the rice, and will meet with the First Nations to discuss the matter.

For Mr. Wood, the issue won't be resolved until the seeding stops. But, according to Ms. Blight, seeding is a central part of the harvesting tradition. Even with traditional methods, rice seeds will fall into the lake when they're brushed off the stalks.

"Any Anishinabe person who harvests manomin will be seeding the lake. … It goes to a very central Anishinabe concept of when you take something, you always have to give something back," Ms. Blight said.

The rice may also be proliferating for reasons separate from the seeding Mr. Whetung is doing. Rob Messervey, chief administrative officer of the Kawartha Region Conservation Authority, said the lake has seen water conditions favourable to the rice. The rice grows well in shallow, clear, still water. The lake provides that, but in the past five years invasive zebra mussels have improved the water quality, making things even better for the rice.

"Clearer water allows the sun to penetrate to the bed of the lake to an extent where all these conditions together promote wild rice expansion," he said.

The conservation authority has been working on a management plan, which is in its public consultation stage and will be finished in 2016. Drafts of the plan mention balancing the need for recreational access with the need for wild rice.

Mr. Wood said for him the issue is about Mr. Whetung seeding the lake, and he's unhappy it's evolved into a bigger issue.

"The issue has never been in regard to any First Nations rights to harvest. We've never challenged that," he said.

Ms. Blight says the issue has always been bigger than one person seeding.

"There's a philosophical difference about recreational enjoyment of the lake and the lake as a spiritual being, as sustenance, as nationhood and governance," she said. 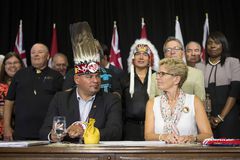 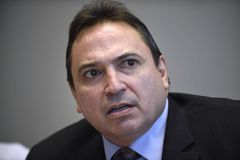 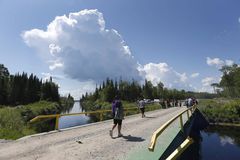