The Canadian government is clinging to the obsolete notion that locking inmates in solitary confinement is acceptable because there is no scientific consensus that it harms inmates, according to a rights group challenging the legality of the practice.

A lawyer for the Canadian Civil Liberties Association (CCLA) argued in Ontario Superior Court on Monday that there actually exists a "remarkable consistency" among international scientific literature regarding the effects of solitary confinement. Those symptoms can include hallucinations, psychosis, post-traumatic stress, suicidal behaviour and other conditions, he said.

"There is unanimity from the Canadian medical community that this practice is harmful," Jonathan Lisus told court during the first day of oral arguments in a case that asks the court to strike down the legal framework governing solitary confinement in federal penitentiaries. "When I take you to the evidence, it is not speculative. The harms can begin in as soon as 48 hours."

The CCLA challenge is one of two major cases focusing on Correctional Service of Canada's use of solitary confinement currently winding through the courts. The other is a suit brought by the John Howard Society of Canada and the British Columbia Civil Liberties Association in B.C. Supreme Court.

Both cases argue that Ottawa should restrict placements in solitary to 15 days – a time frame that would accord with United Nations guidelines, appoint an authority outside Corrections Canada to adjudicate individual cases of inmate segregation and prohibit mentally ill inmates from being isolated. The CCLA application also asks for a ban on the segregation of prisoners needing protective custody and inmates between the ages of 18 and 21.

Mr. Lisus spent much of the hearing on Monday rebuffing the position government lawyers filed in a factum last month.

In that document, Ottawa argued that there is "significant scientific debate about the breadth and extent of the negative effects of administrative segregation an inmate's mental health."

The factum also states that Canada has not practised solitary confinement since a series of rule changes were implemented over the summer that increased the duration isolated inmates can be outside their cells from one to two hours a day, plus a shower. The UN defines solitary confinement as any isolation of prisoners for 22 hours or more a day without meaningful human contact.

And even if Canada does exceed the 22-hour threshold, the UN guidelines – often referred to as the Mandela Rules – are non-binding, the government factum states.

The parties have already heard extensive testimony from inmates, administrators and correctional experts during closed sessions.

The witness list has some notable omissions. Mr. Lisus noted that counsel for the government didn't call a single front-line guard or mental-health worker who deals with segregated inmates. "Canada's decision not to call the best evidence of these experienced [staff] who actually administer this system and have real experience and exposure to its impact on the people who are subject to it is a cause for concern," Mr. Lisus told court.

Instead, Mr. Lisus and co-counsel Michael Rosenberg asked Chief Justice Frank Marrocco to closely consider affidavits from several inmates describing conditions in segregation. One of those inmates told of being isolated in a 40-square-foot cell with no windows. As an analogy, Mr. Rosenberg suggested that the cell was similar in size to Justice Marrocco's desk, which he measured to be 36 square feet.

One inmate testified of his overwhelming desire to pass out by any means necessary to escape the reality of solitary. On one occasion, he began bashing his head against a shower stall wall until correctional officers applied pepper spray and took him to another stall. When he began hitting his head again, the officers directed pepper spray at his genitals, he stated.

"This process won't change unless change is compelled," Mr. Lisus told the court.

The case will return to court on Wednesday. 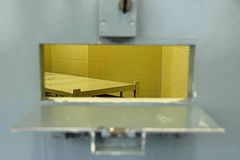