The plain white sticker was barely the size of a Band-Aid, but its message, scribbled in the clumsy script of a Grade 9 boy, was clear to Brooke Campeau.

The author, Kody Martin, 15, is her classmate at Preston High School in Cambridge, Ont. The teens had been trading insults – "fat," "whore," "greasy"– for months.

And then Wednesday, after spending the day confined to the gym with 180 other students for a bullying awareness workshop, Kody walked straight up to Brooke and stuck his message on her black cotton T-shirt.

At a time when politicians in Alberta, Nova Scotia, Ontario and Quebec are drafting anti-bullying legislation, teachers and principals are taking matters into their own hands and implementing school-based approaches like Preston High's.

While they're generally glad to see governments take bullying seriously, the issue's new status as a crisis (rather than just a kids-will-be-kids reality) has raised concerns. Tougher penalties and tighter rules ask educators to single out and crack down on bullies. Instead, teachers and principals are finding creative ways to teach, rather than tell, students to treat their peers with respect and compassion.

Administrators at Preston, an aging redbrick building that serves two public housing complexes, raised $6,000 to hire a consultant to spend two days doing community-building exercises with students. In a more modest approach, students in Maple, Ont., won a regional drama festival last week for a play about bullying that they wrote and performed.

And Wednesday, while the Preston students were in the gym, Grade 12 students in Vancouver were holding a mock trial in a downtown courtroom to determine the extent to which a high school can be held liable for negligence if a child gets bullied.

"You can't legislate getting kids to care," said Phil Boyte, the consultant who led Preston's workshop and who has visited more than a 100 schools across Canada. "I think it's more a social issue than a legal issue. We can have every rule in the world, but what it's really about is getting these kids to care."

With that goal in mind, Mr. Boyte played a game with students he called Cross the Line. He asked the group a series of questions and told them to cross to the other side of the gym if their answer was yes.

He asked them if they were left-handed, if they'd lost a parent, if they'd ever done anything illegal or if they'd struggled with an eating disorder.

Some questions were uncomfortable, but one-by-one the students drifted across the room, wordlessly telling their classmates that they'd been called fat, mocked for their clothes or felt afraid of being different.

"It's hard to hate someone whose story you know," Mr. Boyte told them several times throughout the day.

When he asked if they'd contemplated suicide, half the room crossed over.

When he asked if they'd been bullied in any way, all but about 20 students crossed. The gymnasium was pin-drop quiet throughout the exercise as the students stared back at each other from across the line.

It was John Thompson, a vice-principal at Preston, who recruited Mr. Boyte to lead the workshops. Six thousands dollars is a lot of money for any school, but he felt the workshops were exactly what his students needed.

"We've given them permission now to talk openly about bullying, and to do the right thing," he said. "Those students who didn't talk to each other before this, they might not say hi in the hallway, but they'll make eye contact."

Summit Mitterer, 16, was one of a group of about five students from Kitchener's Eastwood Collegiate who also participated in the workshop.

She made many crossings during the line game, including one trip – about family members in jail – that she made alone. She didn't know anyone at Preston, but her honesty won her a following.

At the end of the day, the Preston students covered her in stickers scribbled with personal messages.

Ms. Mitterer blushed as students crowded around her to cover her small plaid shirt in stickers.

"I'm a big believer that one person can make a change," she said. "Or at least the start of one." 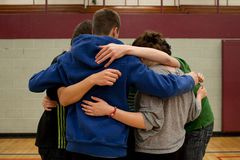 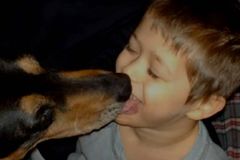 Opinion
Bullying needs to be confronted -- but conflict is part of life
February 22, 2012 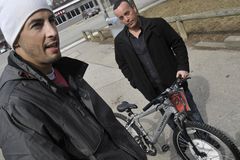 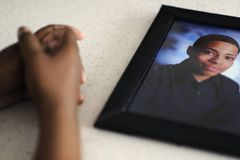