A week of profound grief and sorrow gave way to a poignant message against intolerance as thousands gathered to pay a final tribute to three of the six victims killed last Sunday during evening prayers at a Quebec City mosque.

An emotional ceremony featured numerous calls for empathy and solidarity with the country's Muslim communities, which have often been the target of xenophobic and racist slurs.

"It is time that the authors of this type of discourse, whether it be politicians, hosts or other public figures, that they realize the harm their words may cause," Prime Minister Justin Trudeau told a packed convention centre.

Premier Philippe Couillard reiterated how the events had become a turning point for Quebec society in a decade-long quest to strike a balance between francophones' desire to protect their culture and accommodating the needs of a growing number of immigrants in the province. Quoting Irish poet William Butler Yeats, Mr. Couillard said: "There are no strangers here; only friends that have not yet met."

Many were surprised to learn that Muslims in Quebec City had no place to bury their dead. Quebec City Mayor Régis Labeaume announced during the ceremony that the city will finally help find a suitable location. "You will get your Muslim cemetery," Mr. Labeaume said, sparking an immediate standing ovation from the crowd.

Imam Hassan Guillet called for an end to the heinous words often used against Muslims on the airwaves and in social media, but then he stunned many in the crowd with words of understanding toward the alleged shooter by concluding that hate propaganda was at the root of the horrific crime.

If nothing is done, Mr. Guillet said, there will be other shootings, adding that the time has come to act. The key, he insisted, was education. "Our enemy is ignorance," he said. "We live next to each other but we don't know each other."

Jamil Dhaoudahi, who converted to Islam a few years ago, insisted not only on the need to protect the places of worship but also to openly fight any signs of racist propaganda against Muslims.

"The reason why six people of our Muslim community died on January 29 was in large part due to the discriminatory rhetoric from some of Quebec's elite, certain politicians and mass media," he said. "They are indirectly responsible for these deaths."

In the coming weeks, Mr. Couillard said his government will seek consensus with opposition parties in adopting controversial legislation that will define the use of religious symbols in the public service. He also promised to beef up security at mosques throughout Quebec.

Alexandre Bissonnette, 27, was arrested Sunday night after the massacre in which 19 people were also wounded. He has been charged with six counts of first-degree murder and five of attempted murder using a restricted firearm.

With a report from Verity Stevenson 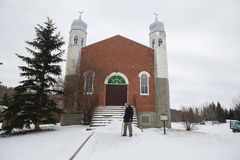 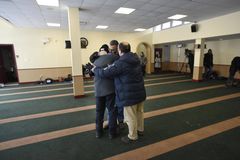